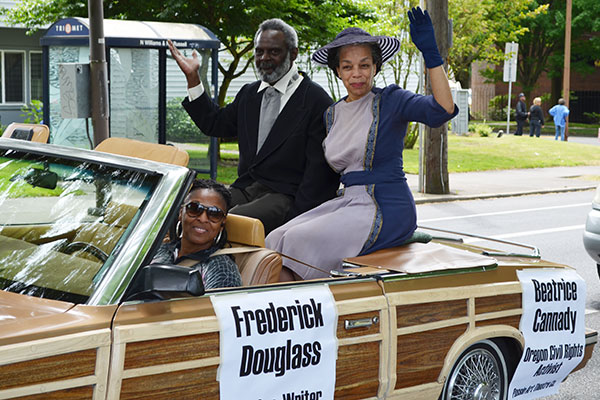 In 1862, President Abraham Lincoln issued his famous emancipation proclamation in the midst of the Civil War. Though the proclamation declared all slaves freed, the news didn’t reach Texas until 2 years later, when Union General Gordon Granger occupied the state with 2,000 federal troops.

On June 19, 1865, General Granger stood on the Balcony of the Ashton Villa in Galveston Island and read aloud a general order freeing the last slaves. Granger declared:

“The people of Texas are informed that, in accordance with a proclamation from the Executive of the United States, all slaves are free. This involves an absolute equality of personal rights and rights of property between former masters and slaves, and the connection heretofore existing between them becomes that between employer and hired labor.”

June 19 has since been celebrated as Emancipation Day or Juneteenth. In honor of the 150th anniversary of Juneteenth, local Oregon and Washington organizations are hosting a series of cultural pride events that celebrate the end of slavery. All events are free and open to the public.

The North Portland Library kicks off the weekend of celebration with a gathering on Friday at 6 p.m. The Library will host an evening of words and music on the North Portland lawn. The event will feature of the work of PassinArt Theatre Company and Eugene T. Lewis.

On Saturday, residents of Oregon and SW Washington have their choice between two Juneteenth sesquicentennial celebrations. Both begin at 11 a.m. and can be found in Northeast Portland and Vancouver.

The festival continues in the park until 6 p.m. with musical performances, foods, arts and crafts, a play area for children and more.

The event features a Historical Pavilion where actors will portray historical figures such as Harriet Tubman, Abraham Lincoln and Fredrick Douglass.

There will be fly fishing demonstrations, a homemade sweet potato pie contest and talent show. Food will be provided by Foody Blues Texas Style BBQ.

Tim Hall, retired Portland Water Bureau official and community liaison for the Juneteenth Oregon event, said the day shines light on some of the darkest parts of American History and honors those who experienced slavery in America.

“Slavery in America is something a lot of people wish forgotten,” Hall says. “Juneteenth is an annual reminder that the ancestors of African-Americans endured 245 years of bondage that took the lives of more than 17 million Black slaves. We should never forget them. Everyone should celebrate their courage.”