Did Spokane NAACP Leader Misrepresent herself as Black? 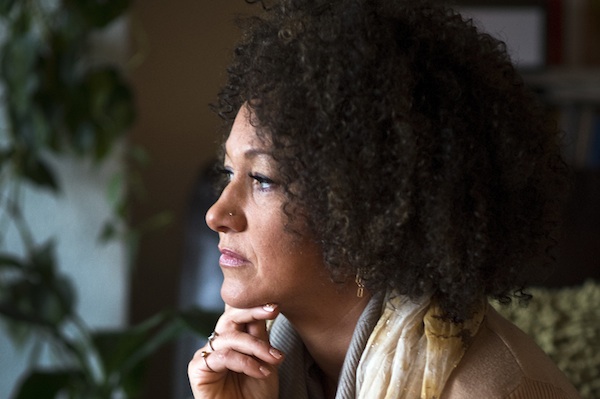 SPOKANE, Wash. (AP) — Spokane NAACP leader Rachel Dolezal says she will speak about the furor over racial identity sparked after her parents said she has falsely portrayed herself as black for years, but she is actually white.

KHQ-TV in Spokane reported that Dolezal sent a message to NAACP members saying she would address the situation at a Monday night meeting of the group. (Dolezal has since canceled that event.)

"As you probably know by now, there are questions and assumptions swirling in national and global news about my family, my race, my credibility, and the NAACP," Dolezal's message said. "I have discussed the situation, including personal matters, with the Executive Committee.

"I support their decision to wait until Monday to make a statement. The Executive team asked that I also release my response statement at the same time, which will be during the 7-9 p.m. monthly membership meeting."

The story has gone worldwide in both traditional and social media with commenters taking  wide range of views on her actions. Some, such as Slate magazine's Jamelle Bouie say the jury is still out. Others are angry with Dolezal saying that without the experience of growing up as a Black woman she has no right to claim that identity: Read Alicia Walter's commentary in the Guardian about growing up black in Spokane. Or read Tylea Simone on the impact this is having on mixed race women who identify as black.

Dolezal is a 37-year-old artist and activist with dark curly hair and light-brown skin. Her parents in Montana have produced pictures of her as a blonde, blue-eyed child to prove that she is white.

The city of Spokane is investigating whether she lied about her ethnicity when she applied to be on the police board. And police on Friday said they were suspending investigations into racial harassment complaints filed by Dolezal, including one from earlier this year in which she said she received hate mail at her office.

"My sons and I would appreciate your thoughts, prayers and support during the interlude," Dolezal also said in her message.

The NAACP issued a statement Friday supporting Dolezal, who has been a longtime figure in Spokane's human-rights community and teaches African studies to college students.

"One's racial identity is not a qualifying criteria or disqualifying standard for NAACP leadership," the group said. "In every corner of this country, the NAACP remains committed to securing political, educational and economic justice for all people."

Dolezal has not returned several telephone messages left by The Associated Press.

On Thursday, she avoided answering questions directly about her race and ethnicity in an interview with The Spokesman-Review newspaper.

"That question is not as easy as it seems," she said. "There's a lot of complexities ... and I don't know that everyone would understand that."

"We're all from the African continent," she added.

The Spokesman Review in Spokane reported (http://bit.ly/1L7mHeS ) Saturday that the black man she claims is her father implied otherwise in a brief telephone interview. Albert Wilkerson Jr. said that he has "nothing negative to say about Rachel" and was reluctant to get involved in the controversy.

"I don't want to throw anyone under the bus," Wilkerson said. Asked about social media postings in which Dolezal identifies him as her father, Wilkerson replied: "You know the answer to that, and that's all I'm going to say," then hung up.

Ruthanne Dolezal of Troy, Montana, told reporters this week that she has had no contact with her daughter in years. She said Rachel began to "disguise herself" after her parents adopted four African-American children more than a decade ago. Rachel later married and divorced a black man and graduated from historically black Howard University.

Ruthanne Dolezal also showed reporters pictures of her daughter as a child, with blonde hair, blue eyes and straight hair.

Her daughter dismissed the controversy, saying it arose from litigation between other relatives who have divided the family.

Ruthanne Dolezal said the family's ancestry is Czech, Swedish and German, with a trace of Native American heritage. She produced a copy of her daughter's Montana birth certificate listing herself and Larry Dolezal as Rachel's parents.

Meanwhile, an inquiry was opened at Spokane City Hall, where Dolezal identified herself in her application to the Office of Police Ombudsman Commission as having several ethnic origins, including white, black and American Indian.

Dolezal was appointed to the oversight board by Condon. She has filed numerous reports of racial harassment since 2009 with authorities in Spokane and nearby Coeur d'Alene, Idaho, where she worked for the Human Rights Education Institute.

The region, which is overwhelmingly white, has a troubled history with race relations. Northern Idaho once served as a home base for the Aryan Nations.

Earlier this week, Spokane police released files into their investigation of Dolezal's report that she received a hate mail package and other mailing in late February and March. The files said the initial package Dolezal reported receiving did not bear a date stamp or bar code.

Investigators interviewed postal workers, who said it was unlikely the package could have been processed through the post office.