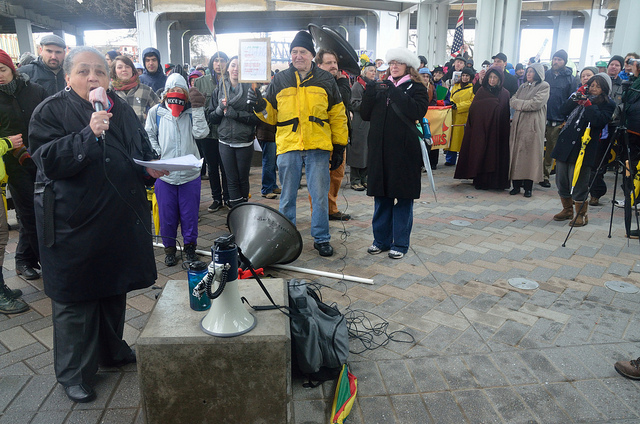 Kathleen Saadat has come out of retirement again – this time to oversee police reform.

Now she’ll be serving on the Compliance Officer/Community Liaison team overseeing reforms required by The United States vs. City of Portland settlement agreement. The 2012 settlement was the result of a Department of Justice investigation that found Portland Police Bureau had engaged in a pattern of excessive use of force against people with mental illness. The DOJ recommended a host of reforms, including improved training as well as increased funding for mental health services, and in late 2014 the city of Portland hired Chicago-based researchers Dennis Rosenbaum and Amy Watson to oversee reform efforts. The Rosenbaum group in turn hired retired Paul De Muniz, a retired chief justice for the Oregon Supreme Court, to serve as a local point of contact. De Muniz resigned his position in April, citing health issues. Initially mum about next steps, in May the Rosenbaum group announced Saadat had been hired to serve on COCL.

Saadat, a longtime racial justice advocate and an advocate for gay, bisexual, lesbian and transgender rights, most recently worked as affirmative action coordinator for the city of Portland. She has worked for Cascade AIDS Project, Multnomah County and the state of Oregon consulting on affirmative action and diverse hiring practices. She’s also a well-known grass roots activist and organizer, helping defeat the anti-gay rights Ballot Measure 9 in 1991 and organizing Portland’s first gay pride marches in the 1970s.

Saadat spoke with The Skanner News about her vision for the new role and what she hopes to accomplish. She noted that Portland – one of more than a dozen cities to have been investigated by the DOJ for patterns police misconduct – is the only one so far to have a Community Oversight Advisory Board made up of citizens, and encouraged members of the public to get involved.

COCL is soliciting public feedback on its first quarterly report, downloadable at COCL-COAB.org. The Community Oversight Advisory Board meets from 5:30 to 8:30 p.m. Thursday at MontavillaUnited Methodist Church (232 SE 80th Ave). Members of the public may also submit written comments are by 5 p.m. Saturday, which can be emailed to rosenbaumandwatsonllp@gmail.com.

The Skanner News: Start by talking about your role and your vision for what you hope to accomplish with COCL.

Kathleen Saadat: The effort to include the community in the development of policy and institutional change, for our local police department, is brand new. It’s an opportunity for the citizens of Portland to come and learn how things work, including the local police, and to express their responses to the implementation of the settlement agreement. That’s huge. That’s big. That’s not small. And we are being watched to see how that goes. There’s been some mistakes made at the beginning but right now a lot of effort is going into resolving complicated issues. A lot of effort is going into developing a clear focus on what the tasks are. My vision is that we, Portland, the people who live here and care about what happens, have a chance to make a real difference in the world. It is what comes about when one is relentless in the pursuit of justice. One begins to shape the culture. Part of this is to shape the culture of the police department and our response to the police. Because if they change, we can too. If they get better at how they treat us, we can get better at how we treat them.

I’ve spent much of my life advocating for justice for marginalized people and this is a part of that struggle, that we should have justice, we should have fairness. We should be regarded as worthy of respect and protection. This is not a new struggle, that is, the one between the community and the police. But it is a new step in trying to get a better understanding. My whole thing is to get everybody to come out to our public meetings to listen and learn and express their opinion. We’re not going to resolve individual cases, but we have taken the stories of the many who have given them to us and tried to shape them into recommendations for policy changes in the police department. Right now we’re looking at the first report, quarterly report of the implementation of the particulars of the settlement agreement and we’ve taken public testimony. We want to hear from people about what their recommendations are for change.

TSN: You have a lot of background in advocating on LGBT issues and for communities of color. Have done criminal justice-specific work?

KS: No. What I’ve done, I’ve worked in bureaucracies enough to have a skill at understanding how it works, how a lot of it works, intuitively. I’m not the voice. I’m the conduit for the voices. I’m a person to help build the structure so the voices can be heard. And that’s all the voices – that’s everybody that’s a stakeholder in this process.

TSN: How much contact have you had with the Rosenbaum group so far?

TSN: Who have you heard from so far?

The focus of the settlement agreement is on the treatment of people with mental illnesses. That doesn’t leave anybody out. There are lots of different kinds of people who have mental health issues. But when you say working with people who have mental illnesses, you’re talking about working with people who are black, white, brown, disabled, gay, lesbian, straight, old, young, however long you want to make the list. Any of us – any of us – can suffer from a mental illness. And it’s hard for us sometimes to stay on track when a lot of what we see on the TV right now is about white policemen and Black young people, men and women.

TSN: That’s one of the things that makes the DOJ settlement in Portland unique. And Portland’s not the only city, but it is one of the cities where mental illness, rather than race, was singled out as the factor that was of concern to the DOJ.

TSN: Have you worked in situations where you’ve had the chance to interface with community groups, open forums like this before?

KS: That’s what I’ve done a lot of my life. I’ve facilitated them, I’ve been participants in them, I’ve helped to put them together.

TSN: How do groups like that work when they work well? How does that process work when it works well?

KS: It works best when you are clear on the purpose of the gathering. It works best when you are clear on how you expect people to treat one another. It works best when you make sure the people that are giving information have good information and know why they’re giving it, and know what they want out of the event. If you don’t know why you’re doing it, it’s messy, because you can’t give any direction or focus or weight. You have to know why you’re pulling people into the room. We’re pulling them into the room because we want to hear from them about the settlement agreement. We’re not handling individual cases. We’re looking at systemic change, institutional change.

TSN: What are the other things the public should know about this process?

KS: What the public needs to know is that it has a role in it that is, at its core, one of the most important things about this process, is that the public has a role. They also need to know that it’s the first in the country. It’s an experiment and it’s an opportunity to be involved in changing something that we all care about. The public also needs to know that the city of Portland, the Department of Justice, the Portland Police Bureau are just three-fourths of what it takes. The fourth fourth is the community. The leadership up to this point, the diligence, the tenacity, the refusal to give up is admirable. There are lots of people, including the Albina Ministerial Alliance, who have seen to it that this has continuously gone forward. They need to be congratulated for bringing us this far, for bringing us here and continuing on.