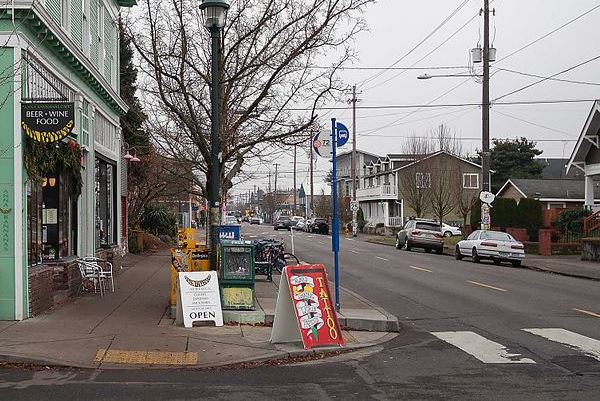 Shots fired by a teenager at Alberta’s popular Last Thursday arts festival -- and the arrest of two activists who tried to help one of the victims – sparked a new conversation about race and class in the Rose City.

According to court documents, Turon Lamont Walker, 16, has admitted responsibility for the shooting which left two 15-year-olds and a 25-year-old woman injured sometime just after 7 p.m. along 20th and Alberta. Walker, a Vancouver, Wash. resident, faces two Measure 11 charges of attempted murder and will be tried as an adult. He also faces an unlawful weapon charge.

All three victims survived the shooting and are in various stages of recovery.

Loren Ware and Marcus Cooper – two Don’t Shoot Portland activists who were arrested after assisting one of the victims in the shooting – on Wednesday afternoon staged what they called a “community hearing” in the spot where the shots rang out. They talked about race, gentrification and police brutality in Portland. Ware is a popular Portland rapper who performs as "Glenn Waco."

“This is our community,” Cooper said. “It’s not just Black, it’s not just brown, it’s humans in general.”

Ware referred to Alberta as a crime scene, but not for the events at Last Thursday.

“We walk in our neighborhoods and get looked at like we don’t belong,” he said. “Everybody wants to point the finger to gang members — or children — as the issue. But what about the socioeconomic conditions that breed gang violence and other crimes?” he said.

“This is a key moment to reach out to the parents of these kids and help them get their children get on the right track,” he said.

The trauma-informed organization Healing Hurt People, which serves primarily males of color between the ages of 10 and 25 who’ve been shot or stabbed, visited the victims at Legacy about an hour after the shooting.

“It’s scary for the neighborhood, the families, and the people involved,” Sheryl A. Johnson of Healing Hurt People told The Skanner.

The group says until they get the okay from the teens’ parents, they cannot do any further work with them.

A post shared on Ware's Glenn Waco Facebook page and attributed to 15-year-old shooting victim Nayuntre Latrell Hurd thanks Ware and Cooper for helping him at the scene and staying until the ambulance came. Another post on the same account refers to the shooter as "my day 1," a slang term implying the shooter and victim knew each other well.

Around 50  people showed up to the arraignment hearing the following day at the Justice Center, including members from the activist and hip-hop communities, who showed up in support of the two men.

According to Portland Police Bureau spokesperson Pete Simpson, Cooper and Ware were not arrested for the shooting but for their actions after that.

"They were arrested for their actions after that and their interactions with officers attempting to get critical information about this attempted murder investigation."

Some Events Captured on Video

A press release from the Portland Police Bureau said the bureau’s Gang Enforcement Team is investigating the incident and would like to hear from witnesses.

Earlier this week, the department announced that due to an uptick in gang activity, it is reallocating six officers from other departments to serve on the Gang Enforcement Team. That will bring the number of officers on the team up to 24.

A video of the scene uploaded to Youtube May 30 shows the already-unfolding tension just out front of the Don Pancho taqueria where witnesses said they’d been assisting the boy.

Cooper appears irate with six officers surrounding both he and Ware. Words are exchanged between the two parties as officers close in as the two men move back.

Bystanders begin to pull out their phones, capturing film and video of the scene as Cooper moves to shield Ware while their friend yells from the sidewalk.

Three officers eventually form a circle around the two activists who have their hands spread away from their bodies while words continue to be exchanged.

Cooper can be heard repeating his name, while saying, “I’m an activist out here,” and, “I was helping save their life at the crime scene.”

Shortly after an officer grabs Cooper’s hands and puts him into cuffs and moves him into a police squad car while two officers move in to detain Ware before the three minute video comes to a close.

Activists to Appear in Community Court

Cooper will report to community court June 10, and Ware or an attorney will appear June 11. Community court, as described the Multnomah County District Attorney’s website, is an “an early resolution program that encourages defendants to take responsibility for their conduct and pay-back their community in exchange for a dismissal or a sentence of discharge.”

According to deputy district attorney Caroline Wong, community court participants are required to plead guilty going in, though in some cases defendants are able to plead no contest – for instance, if they were intoxicated and don’t remember the incident in question.

Community court judges can order participants to perform community service, write an essay about their offense or attend a class that addresses the nature of the offense.

A bank account has been set up for both Loren Ware and Marcus Cooper’s legal fees through US Bank.