Head Start: Celebrating Its 50th Anniversary in the Crosshairs 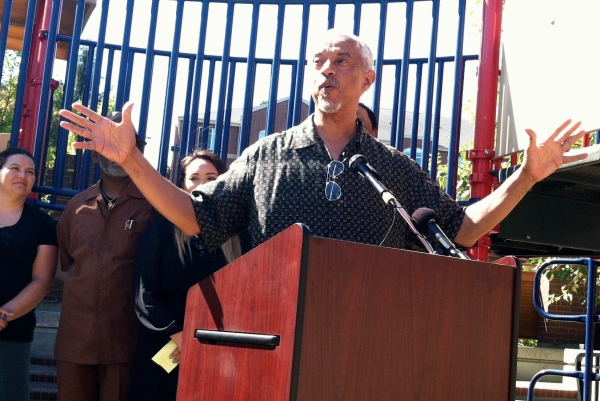 Lisa Loving Of The Skanner News
Published: 28 May 2015

As the nation celebrates the 50th anniversary of Head Start this summer, Albina Head Start Director Ronnie Herndon says politics are threatening the effectiveness of the venerated group.

Long considered one of the most effective early childhood development programs in the country, today Head Start faces mandated changes from the federal government and a surprising lack of support from Oregon’s fractured education bureaucracy.

Operated by the U.S. Department of Health and Human Services, Head Start is considered to be one of the oldest and most successful anti-poverty programs nationally.

Yet in recent years it has been attacked for being ineffective in the wake of studies that showed the gains made by Head Start children “fade” after a few years in the public school system.

In Oregon, the new Early Learning Council established by now-disgraced former Gov. John Kitzhaber opted last year not to award Albina Head Start any expansion grant money – the first time that had happened in the history of the organization.

The Skanner News sat down with Herndon to talk about the program’s status and why it is crucial for kids.

The Skanner News: Last time we spoke, we were examining how the state decided not to give any expansion grant money to Albina Head Start. Your organization appealed that decision but the former director said there was no appeals process. What is the status of that situation?

Herndon: Nothing has occurred since this past summer. We did not get any expansion funding, even people who work at the state and most people involved in social services involved in the county think that was a terrible decision.

We have the state money that we already have, but we did not get any expansion money. So that means, given that we serve the largest number and percentage of Black children, that probably zero additional Black kids got served after the state spent an extra $300 million.

The Skanner News: What do you think about the Obama Administration’s “reform” proposals for Head Start? And why does it seem that the program that has been praised for years is suddenly inadequate?

Herndon:  Children who go through Head Start are more likely to graduate from high school, they're healthier. As a matter of fact, President George W. Bush credited Head Start with lowering the child mortality rate in the entire country because of our emphasis on health care. You have award-winning economist and Nobel Prize winner James Heckman at the University of Chicago who says said Head Start is one of the best investments we could make.

Now they’re saying, for it to work better or you have to make sure that all of your teachers have education degrees. And all this research that they talk about over the first 40 years, the majority of those teachers did not have a degree. They were well-trained; we train teachers on the job. It's like an apprenticeship program.

For a lot of low income women and women of color, college is not an option. Some don't want to go. If I'm already doing a job well, why do you tell me that now I have to go get a college degree?

And interestingly enough – this is almost laughable to me – in Head Start the majority of children are children of color. They're either going to be Black, Hispanic or Native American. You put those three groups together, that's probably 70 or 75 percent of all the kids at Head Start, historically.

Now look at all the early childhood experts in this country and see if they reflect that population. You will travel a long way before you'll see a panel that's made up of people who look like the population of Head Start.

TSN: In terms of politics and Head Start, how have the Republican presidents stacked up to the Democrats?

Herndon: Well, President Bush set up a panel that essentially said, okay, come up with the standards that you want, and we’ll see if you either meet them or don't meet them.

They certainly don't do this in the Defense Department. Take the lowest 10 percent, based upon the number of mortar shells that didn't work, and your corporation will have to re-compete for its contract?

They don't do this in any other part of the government. It's an artificial floor.

In other words it literally undermines the program, which is exactly what Race to the Top and No Child Left Behind did

So here you are 50 years later, 31 million children have been through it including Darren Walker, president of the Ford Foundation. He gives the credit for where he is now to Head Start.  A woman from California, Rep. Loretta Sanchez, she credits Head Start.

TSN: What’s the most important thing for the public to know about our education system right now?

Herndon: To me the question is: Why can't we figure out why the system isn’t working? In my mind the reason is that we start out by training teachers very poorly. Education is probably one of the few occupations I know where instructors who have never done well in the subject matter are supposed to be teaching the neophyte teachers.

A woman came up to me about six years ago, she's teaching third grade reading – and she said, I was never taught to teach kids how to read.

So this is the fundamental flaw.

Start from the very beginning. You could say, we are going to ensure that during a person's experience in the school of education that 80 percent of their time will be in front of a person who was a successful practitioner, a teacher who had children scoring at or above grade level – pick your number, 90 percent? I'll go down to 80 or 85 percent of their children historically scoring at or above grade level.

To become a principal it's even more hilarious. They are not taught by successful principals -- it's just who happens to be here, get a certificate, another stamp on your butt, and now you’re ready.

Until we fix these fundamental flaws will be going around in circles, around and around. You can change the curriculum. No Child Left Behind, No Child to the Top, Race-Run-Walk to the Top, it doesn't matter.

Unless you fix the fundamental flaw  -- which is teacher and principal preparation and training -- this is nothing but a shell game.

Find out more about Albina Head Start at www.albinahs.org.

Hear Herndon live on KBOO Community Radio at 8 p.m. on Thursday, May 28, or listen to the podcast here.