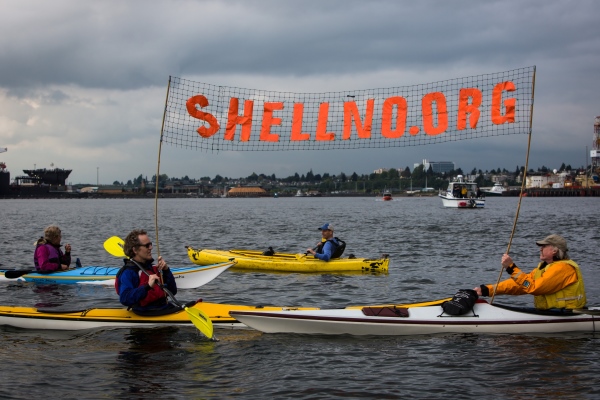 SEATTLE (AP) — The first of two drilling rigs Royal Dutch Shell is outfitting for oil exploration in the remote Arctic Ocean was being towed to the Port of Seattle Thursday, despite the city's warning that it lacks permits and threats by kayaking environmentalists to paddle out in protest.

The petroleum giant is moving ahead with plans to use leased space at the Port of Seattle to load its rigs and a fleet of other vessels with drilling supplies and personnel before exploring for oil this summer in the Chukchi Sea off Alaska's northwest coast.

The city has warned that the Port of Seattle needs a new permit before it can host Shell's Arctic drilling fleet, threatening fines for unpermitted activity by the port and Foss Maritime, a local company working with Shell.

One of the rigs Shell plans to use — the 400-foot long Polar Pioneer — left Port Angeles at about 1:40 a.m. Thursday and was expected to arrive about 12 hours later in Seattle, The Peninsula Daily News reported. The other, the Noble Discoverer, was at the Port of Everett on its way to Seattle.

John Sellers, 48, paddled out to meet the Polar Pioneer when it arrived in Port Angeles and now hopes to do the same when it arrives in Seattle's Elliott Bay.

Environmentalists are planning a three-day so-called "festival of resistance" starting Saturday. Smaller groups of experienced kayakers have also been training to confront the rigs when they arrive in Elliott Bay, though many said they will respect safety zones the Coast Guard has set up around the ships.

"There's a sense of gravitas around this moment," said Bill Moyer, who has been helping train protesters in paddling techniques and kayak safety for the "Paddle in Seattle."

"It's hard to see where normal people can have an impact on something as vast and seemingly distant as climate and the Arctic," said Moyer, executive director of the Backbone Campaign. He called Saturday's protest on the water a "historic opportunity for regular people to demonstrate their desire for a pivot away from fossil fuels."

Shell's cleared a major bureaucratic hurdle Monday when the federal Bureau of Ocean Energy Management approved its multi-year exploration plan in the Chukchi Sea. The company still needs other permits from state and federal agencies, including one to drill from the Bureau of Safety and Environmental Enforcement.

But Shell spokesman Curtis Smith said Monday's approval "is an important milestone and signals the confidence regulators have in our plan."