Construction Dangers on Your Block? 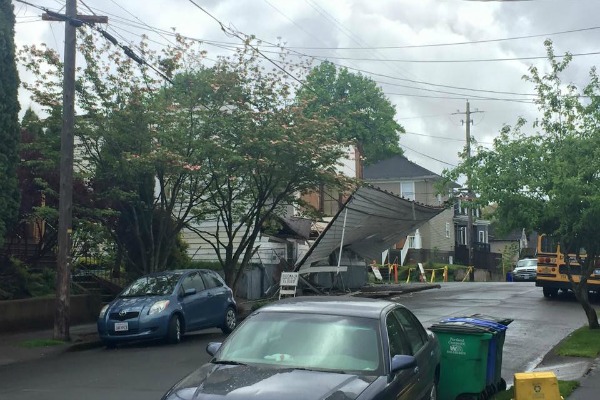 Arashi Young of The Skanner News
Published: 13 May 2015

A demolition crew moved to tear down one of the last remaining walls of a 111-year-old church last month in the King neighborhood of Northeast Portland. The front boom of the excavator knocked the wall outside the protective fencing.

Onlookers gasped as the side of the building fell and bounced against the power lines. A YouTube video of the blunder circulated on social media, becoming a flash point for discontent about hazardous demolitions.

A poster mocking construction regulation agencies seen around town and in the Facebook group “Stop Demolishing Portland,” accuses the Bureau of Development Services, the Department of Environmental Quality and the Oregon Health Authority of being negligent overseers of development hazards.

Neighbors are increasingly concerned about the safety of demolitions in their communities and have been asking for more accountability from regulators.

The trouble is – finding the right person to talk to can require multiple calls to multiple government offices.

In the process of writing this story, The Skanner News spoke with six government agencies: the Bureau of Development Services, the Oregon Health Authority, the Oregon Department of Environmental Quality, the Oregon Occupational Safety and Health Administration, the Portland Police Bureau and the Environmental Protection Agency.

Dealing with construction hazards is further complicated by regulatory loopholes. One example is lead paint, which is not regulated in full demolitions of residences. Similarly, asbestos has strict disposal standards, but enforcement of those rules depend on voluntary asbestos audits.

Who do you call?

Reporting an unsafe demolition is not a user-friendly process. While government enforcement bureaus offer complaint lines, it can be a trial to determine which agency regulates what hazard.

Michael Liefeld with the enforcement program of the Portland Bureau of Development Services said there is no “one-stop-shop” for citizen complaints. The department enforces state and city building codes through building permits.

Dangers such as the church wall falling down would involve multiple agencies, according to Liefeld. It is “not necessarily” a building code violation according to BDS, but it could be a work safety violation – which would then involve the Oregon Occupational Safety and Health Administration.

Since the wall fell outside of the perimeter and posed a public safety danger, it would be appropriate to call 9-1-1, according to Pete Simpson, Portland Police Bureau public information officer.

Liefeld acknowledges that it can be confusing to know who is responsible and says that part of his work at the enforcement program is to steer people to the right agency.

“We get all kinds of inquiries, so if it’s something outside our jurisdiction we can refer people to other city agencies or outside agencies to have their concerns addressed and figure out how to get help on things,” Liefeld said.

Lead paint and asbestos are often considered as similar construction dangers, but the two substances are regulated by two different agencies.

The Oregon Health Authority is responsible for lead paint; asbestos is regulated by the Oregon Department of Environmental Quality.

Asbestos is required to be abated -- which means wetting, bagging and dumping it at a disposal site certified to receive asbestos waste.

DEQ requires all commercial, industrial and residential homes with more than four units to have a survey done to determine if there is asbestos present, said Audrey O’Brien, program manager at Oregon DEQ.

Single-dwelling homes do not require an asbestos survey, although DEQ recommends they be done. This leaves a loophole where people are required to abate asbestos if present, but they aren’t required to actually check for it.

The lead paint rules followed by the Oregon Health Authority and the Construction Contractors Board stem from EPA rules. The enforcement of proper lead paint disposal is outlined in the EPA’s Renovation, Repair, and Painting (RRP) Rule. This policy covers the types of housing likely to have lead, contractor certification requirements and the creation of a lead-safe workplace.

OSHA requires the demolition crews that work around lead paint and asbestos be protected from harm, but those protections do not carry over to neighbors.

Ben Maynard, an environmental health specialist with OHA, said lead paint dust is still a health hazard even in a demolition.

“The exemption from the rule is a problem,” Maynard said. “It's under-regulated and agencies are working on this issue.”

Most recently, Oregon Senate Bill 705 was supposed to direct OHA to complete a study and report on the demolition of residential structures that may contain lead-based paint and asbestos. In a later version of the bill, OHA’s responsibility and lead paint requirements were dropped.

The new legislation empowers the Environmental Quality Commission to require contractors to perform asbestos surveys on homes prior to demolition.

As agencies, BDS, OHA, DEQ, OSHA, operate through a “complaint-driven process.” They do not go out looking for construction violations, but rely on complaints to be filed before starting an investigation.

When calling in a complaint, it is helpful to have information such as the address and a description of the work being done. It is also useful to have pictures of the code violations and to call in the complaints as soon as one sees them.

Liefeld said it is important for people to call if they have questions or concerns. BDS also lists the kinds of code violations they enforce on their website.

VIOLATION OF BUILDING CODES: The Bureau of Development Services is concerned with unpermitted work and compliance of the city and state building codes. To report code violations to BDS:

ASBESTOS: The Oregon Department of Environmental Quality regulates asbestos issues. To file a complaint with DEQ:

LEAD PAINT: The Oregon Health Authority is responsible for lead-based paint rules around renovation, repair and painting -- they do not regulate lead-based paint in demolitions. If you have a concern with renovation and lead paint, contact the Construction Contractor Board if the crew is licensed by the CCB:

If you are worried about lead-based paint exposure from renovations by people who are not licensed by the CCB, contact the Oregon Health Authority:

WORKER SAFETY CONCERNS: The Occupational Safety and Health Administration is charged with the enforcement of safety and health legislation in the workplace. To report a workplace hazard: