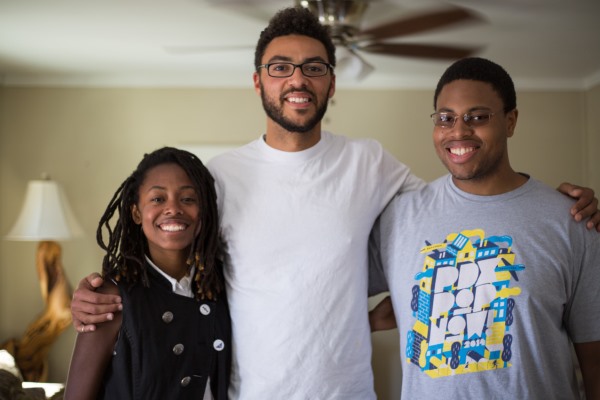 The Urban League of Portland is gearing up to release, “The State of Black Oregon,” the highly anticipated follow-up to its 2009 report, at 10 a.m., May 5 at the Cascade Campus of Portland Community College.

The document details the status of African and African American communities as they relate to the barriers of poverty, gentrification, educational achievement and entrepreneurship holding back the communities’ economic development throughout the state.

In this interview with The Skanner News, the two media-makers share their reflections on the trip, insight into what “community” looks like now, and what it could look like in the future for the – roughly --  two percent of Oregon’s community that comprises our state’s Black population today.

The Skanner News: I was reading your report back on the State of Black Oregon and you said that you felt like this project is “necessary.” Why?( http://stateofblackoregon.org/ )

Abioto: It’s reaching into the past, present, and the future of Black people and people of African descent in Oregon. It feels like a multi-model survey of Black life in a way that can be of service to us here. It feels necessary to see what the thing is so that we can affect the thing.

Poinsette: When you look at the narrative of Black people in Oregon, I think the larger story is very Portland-centric, and that’s for obvious reasons because Portland has the largest concentration.

I don’t travel a lot so getting the opportunity to drive out and really get to see how big Oregon was also important.

TSN: Did you feel like there were thriving Black communities outside of Portland in any of the places you went?

The other thing is that we talked to more church people and they have a connection to Portland through that, so they’ll make the drive up for revivals and whatnot.

Abioto: I guess being able to go out to La Grande and seeing one of the first Black churches that was built in the state, and it’s still standing and there’s still a community of people that go there.  It’s not all a Black community that attends it, but it’s still there.

There was a Black man that came into Klamath Falls -- maybe from Arkansas in the 40s -- and he was an army vet and passed away there. They did not allow him to be buried in the city cemetery; there was an exclusion law about that.

But what’s inside of “The State of Black Oregon” that’s coming out is not so much those kinds of stories of historical sites and things. It’s more about the state of things now, so -- statistics, and case studies and interviews and things like that.

TSN: What were some of the things you were looking for in terms of case studies?

One was in Eugene -- there was a “rites of passage” program that, quite honestly is something people in Portland need to be looking at. We need to model some things we’re doing for youth after it.

It’s been there for 18 or 19 years. You have these dynamics in a lot of places like Eugene, where a lot of people are mixed-race. So, to see so many shades and perspectives of these kids -- but coming together around history, around culture, doing Tai Chi in the morning was great.

Abioto: They were doing critical theory, and critical reading. Teachers just teaching them about themselves. Allowing them to read stuff about things like the LA riots, all kinds of things.

Poinsette: When I was younger I was a part of a rites of passage program in Portland called Bridge Builders, which is now defunct. When I go down to Eugene and see this thing, it really reminds me of that and to see it working so effectively -- that’s probably one of my favorite stories.

TSN: After touching all these cities, what’s your sense of the State of Black Oregon right now?

Poinsette: There’s a lot of things we talk about wanting to see more of. We don’t have to go to Atlanta to do this stuff, these people are actually here all throughout Oregon and many of them in one way or another want to connect with more people.

I think it gets overstated that Portland had this really tight community and that’s not entirely true.

The community wasn’t unified, and that’s part of the reason for gentrification. Obviously it’s not the entire reason -- because of political power and capital in general-- but that’s a big reason.

Asian and Latino communities are everywhere. You can’t go anywhere in Oregon and not find a Thai restaurant.

People aren’t playing the game and waiting for people that don’t love them to accept them in these other places. They have more visible unity than you see with us a lot throughout Portland. I know that’s not the most popular thing to say but it’s real.

It doesn’t have to be that way.

TSN: There are a lot of things we could be talking about, but I’ve got to wrap it. Is there anything else you want to add?

Abioto: I want people to use the document, to see it, to be inspired from it. There’s a lot of information, there are a lot of experiences, there are a lot of stats, there’s a lot of recommendations. I want people to debate it, to question what’s in it as well, to come up with their own ideas. To continue to make what Oregon is, what Black Oregon is, what the different presence of a Black Oregon is.

We don’t all have to be the same, or like the same things, or even want to be around each other all the time but we can craft our future as Black people in the state as and as human beings with all the rights and dreams that we can have.

I want people to see that and be inspired to be active and not just think because we’re Black in Oregon it’s hopeless, or we that can’t do anything because we’re in the Aryan homeland.