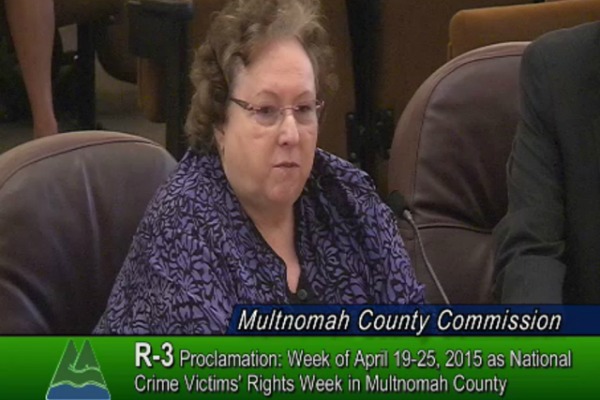 Last Wednesday, the Multnomah County Board of Commissioners proclaimed the week of April 19 – 25 to be National Crime Victims’ Rights Week. The declaration is as an opportunity to promote awareness of crime victims’ experiences and to push for greater protections.

The national theme for this years’ victims’ rights week is “engaging communities and empowering victims.”

District Attorney Rod Underhill testified before the county board about the hardships of crime victims who are often overlooked and neglected.

“Each year, thousands of residents of Multnomah County experience the trauma, pain, humiliation and personal and financial losses of being a victim of crime,” he said.

Susan Walters spoke to the council about that after her estranged husband, Michael Kuhnhausen, hired a hit man to kill her. She survived the 15-minute deadly force encounter and ultimately killed her attacker, Edward Haffey.

"Fifteen minutes in the hallway was a lot easier than everything that came after, the pain of betrayal, the fear of a second attack by someone on his behalf,” she said.

Walters said this fear defined her life. Victims’ rights advocates helped her get control again by suing Kuhnhausen in a civil case to prevent him from using the money to hire another hit man. She found peace only when he was convicted and incarcerated.

Once her ex-husband’s parole began to near, Walters needed the help of her advocates again. She had many questions about his release, and she felt like she wasn’t getting any answers. Only when she contacted the Oregon Crime Victim's Law Center did she feel like she was being heard.

While she was glad to have a parole plan that brought in her needs, Walters expressed frustration to the council about the confusing and disjointed process that still needs improvement.

Underhill said there are many bills in the Oregon legislature that would strengthen and protect victims’ rights. A number of the bills pertain to protecting parties who have experienced domestic violence or sexual assault. These decrees include:

Underhill also mentioned legislation that would make it easier to receive testimony from people who are either victims of sex crimes, child witnesses or special witnesses who are unable to testify in person.