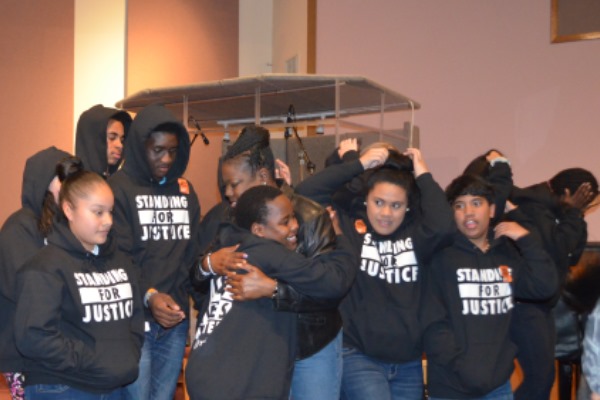 A message of youth empowerment at one event, and a call to end racial profiling at another were the focus of Sybrina Fulton during her two-day visit to Portland this week.

Fulton is the mother of Trayvon Martin, an unarmed teenager from Sanford, Florida, who was shot and killed by Neighborhood Watch volunteer George Zimmerman in 2012. Zimmerman was acquitted of murder in the case, which drew outrage around the world.

Tuesday morning, Fulton served as the keynote speaker at the YWCA’s 38th Annual Inspire Luncheon, during which she recounted her journey from being a working mother to a full-time activist in the wake of her son’s death.
“My son was murdered, and for a long time I would not say ‘murdered,’” Fulton told the crowd. She said she was weary of becoming the “voice for Trayvon” but changed her mind when she learned police did not plan to arrest Zimmerman.
“I could not just let my son’s death be in vain,” she said. “I had to speak out against racial profiling and against the injustice that’s happening against our young people today.”

The 800-strong crowd at the Portland Hilton Downtown included City Commissioner Steve Novick and Multnomah County Commissioner Loretta Smith.
The night before, Fulton drew an even bigger crowd of 1,400 to Maranatha Church for a “community gathering.”
Here Fulton delivered a largely similar message of improving the justice system through involvement with community organizations, but this time with a focus on the youth.
Speaking without a script, Fulton stressed the need for people to exercise their power in the justice system beyond simply marching in the streets.

“If I take the hoodie out of the equation what do we have left?” Fulton posed before answering her own question. “We have the color of his skin.”

Jefferson High School student Llondyn Elliot read a poem for Fulton about the plight -- and strength -- of Black youth in America, which drew a standing ovation from the crowd.

Middle schoolers from Chief Joseph/Ockley Green's Mock Trial class also spoke. The teens detailed their re-creation of Zimmerman's murder trial before Oregon Appeals Court Judge Darleen Ortega last fall; the judge found him guilty of murder.
“We didn’t feel like celebrating because there was still no justice,” said one of the students.

The teenagers also read of a list of demands for the adults, calling on them to teach the history of racism -- and how to dismantle it; to educate students on their legal rights; and to mentor them.

Students from Chief Josephy/Ockley Green read off their list of demands to the adults in the community. Photo by Jerry Foster

Fulton closed the community meeting by answering questions from the crowd.
When asked if she’d forgiven Zimmerman yet, she says she hasn’t, but feels she will in “her own time.”
“I am a human being,” she said. “But at the same time I’m a mom; my heart still aches

Martin would have been 20-years-old this year, and Fulton says instead of marking his death day she celebrates his birthday.
Fulton told the crowd she is “forever a mother of two.” Her eldest son, Jahvaris Fulton, just graduated from Florida International University with an information technology degree.
Even so, Fulton says she fears that Jahvaris could end up the victim of racial profiling like his brother.

In response to a question on how “everyday” people can effect change, Fulton told the crowd to register to vote, stay aware of proposed new laws, stay connected with local advocacy groups, and when it comes time to vote—exercise that power.

“I have committed my life to doing my part,” she said. “So I’m just challenging you guys to do your part as well.”

See a complete gallery of photos from Fulton's stop at Maranatha Church by visiting The Skanner's Flickr page here.