Seattle Attempt to Keep Addicts Out of Jail Shines in Study 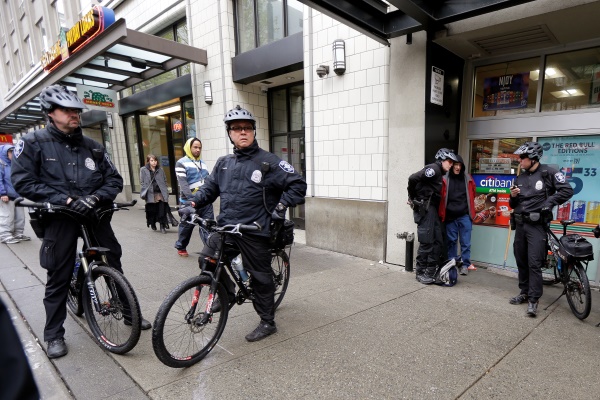 SEATTLE (AP) — Gailen Lopton was in a downtown alley two weeks ago, having a buddy jab him in the neck with a heroin-filled syringe, when he suddenly found himself in the company of Seattle's finest.

The police officers weren't looking to lock him up, though. Instead, they offered him a chance to enroll in a first-of-its-kind program called Law Enforcement Assisted Diversion, aimed at keeping addicts and prostitutes out of jail and in housing, counseling, job training or even yoga — whatever services they need.

Organizers have had good feelings about the project since it launched in 2011, and a University of Washington study released Wednesday backed up their work: Participants were up to 60 percent less likely to be arrested than a control group, the evaluation found.

The results are so encouraging that advocates say it should prompt reconsideration of President Barack Obama's call for an expansion of drug court programs and a hard look at replicating Seattle's effort nationwide, as some cities are doing.

"This is a big deal — bigger reductions than are seen in almost any criminal justice interventions," Lisa Daugaard, policy director at King County's Public Defender Association, wrote in an email. "This makes the case for 'system as usual' processing (even with drug courts) very weak."

Unlike with many drug courts or other programs, participants aren't threatened with jail time or with being kicked out if they relapse.

As he loitered outside a payday lending store Tuesday, Lopton, 24, said he's excited to try it.

For years, communities have been seeking alternatives to the revolving-door justice of the drug war. Santa Fe, New Mexico, launched a program modeled on Seattle's a year ago, and Albany, New York, plans to start its version next year. Dozens of other cities, including San Francisco, Atlanta, Houston and Portland, Maine, have expressed interest. Billionaire George Soros' Open Society Foundations announced last week that it would give five jurisdictions up to $200,000 each to help them copy it.

In Seattle, which led the way in providing housing where chronic alcoholics can drink, saving millions on emergency response and hospital costs, police, prosecutors, defense attorneys, city officials and community groups came together to launch the program.

Open Society, the Ford Foundation and others provided a budget of $800,000 a year for four years. The city matched the annual contributions over the past two years and is trying to figure out how to pay to expand it. A cost-benefit analysis is due later this spring.

"Now that we know it works, I think the interest in this is going to just explode," said Gabriel Sayegh, managing director of policy and campaigns at the New York-based Drug Policy Alliance, which is affiliated with Soros.

Between October 2011 and July 2014, Seattle police helped 203 people enroll, the study said. Most had just been arrested; others were suspected of recent drug or prostitution activity. Instead of being booked, they were referred to a case manager. Many were provided motel rooms, groceries, clothing, drug treatment and job training.

Some were placed in yoga classes or given art supplies — "any service that could clear whatever roadblocks are in the way for somebody to make behavioral changes," Daugaard said.

Police determined eligibility: no serious violent crimes in the past, no exploiting minors in a drug-dealing enterprise, no drug dealing for profit above a subsistence level, among other criteria.

In the control group were 115 people who would have qualified but weren't offered the chance because they were arrested on certain police shifts or outside the neighborhoods covered by the program.

When Misti Barrickman enrolled, she had been homeless for seven years, shoplifting, prostituting herself or begging to support her heroin and crack addictions. Her first thought was to scam the program: "I thought, they're giving me a motel room and groceries? What else can I get from these people?"

She relapsed several times, she said, but her case manager never judged her. Eventually, something changed, and she quit for good about two years ago. She's now in her second year at community college.

On Tuesday, in the same neighborhood where she used to sell herself, Barrickman, 34, bought a new outfit at a store so she'd have something to wear at the news conference announcing the study's findings.