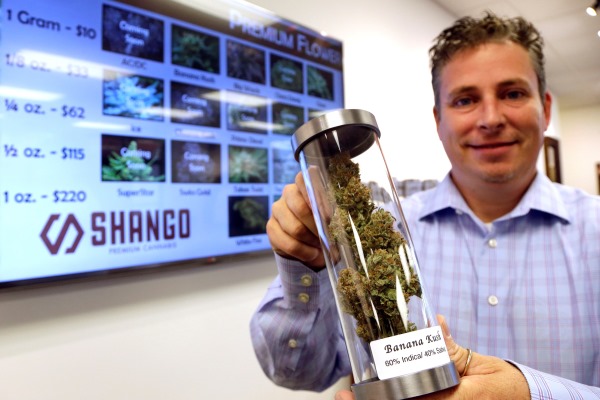 U.S. Sen. Ron Wyden and Congressman Earl Blumenauer say the legislation would alter a section of the federal tax code that prohibits anyone selling controlled substances from getting tax breaks. At a press conference on Thursday, the two legislators said they would introduce the bills next week.

Marijuana possession, sale and cultivation continue to be offenses under federal law.

Congress prohibited anyone selling controlled substances from getting tax breaks in 1982, after a drug dealer claimed his yacht and weapon purchases as legitimate business expenses.

But Wyden and Blumenauer said times have changed, and federal law hasn't caught up.

Last fall, Oregon joined Colorado, Washington state and Alaska and made pot legal for anyone over 21 to grow, buy and possess. Oregon is also one of more than 20 states to allow the use of medical marijuana, which in many cases is sold through dispensaries.

"This is about having equitable treatment for legitimate businesses and putting them on an equal footing," Blumenauer said.

The bill likely faces an uphill battle. The Republican-led Congress has largely opposed marijuana legislation, and President Obama, at a town hall in Jamaica, said: "I do not foresee anytime soon Congress changing the law at a national basis."

There are over 200 medical marijuana dispensaries in Oregon. Recreational possession and growing will start in July, while retail sales are not expected to start until next year.

Wyden and Blumenauer said the IRS rules are unfair and burdensome to marijuana business owners, who face tax rates of 70 to 90 percent. Many illegally take the deductions, or go out of business, they said.

"It drives so many people away from legal business and into the underground," said Shane McKee, co-founder of Shango Premium Cannabis dispensary in Portland. "It makes many businesses unable to operate."

Businesses can typically deduct the expenses of running a small business such as rent, most utilities and payroll. They can also claim a tax credit if they hire a veteran, as well as get tax breaks related to construction or operating costs if they want to remodel a building for their business.

The tax rate for most small businesses that take those deductions and credits is around 20 percent, the legislators said.

But opponents say the government should not be giving a break to an industry that remains illegal on the federal level.

"Making it easier for companies to sell illegal drugs doesn't make any sense," said Kevin Sabet, president of Smart Approaches to Marijuana, which opposes legalization. "This is a massive industry whose goal is to profit off of other people's addictions."