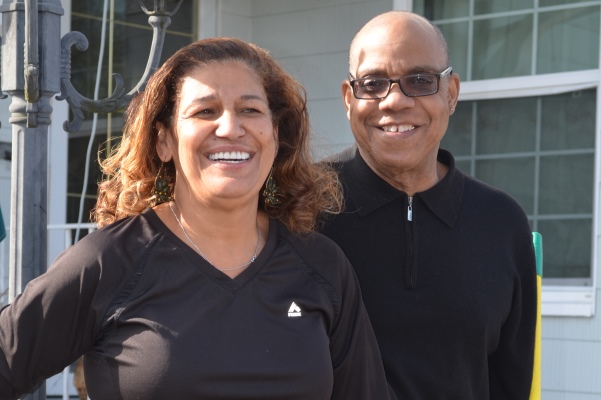 A lawsuit alleging denial of service brought by Alberta Street resident Kathleen Hampton against Enzo’s Caffé Italiano has been amicably settled over a pan of the restaurant’s famous homemade lasagna.

Hampton told The Skanner News last week that Enzo had reached out to her with a letter asking for a meeting, and that the food – and Enzo – were wonderful.

Maybe even the best in town.

“I feel good about it,” Hampton said Wednesday. “I think he’s a nice man and he’s been thinking about what happened.”

Details of a legal agreement reached between the two remains sealed.

It’s a stunning turnaround for a case that spread around the globe and touched a raw nerve in Northeast Portland, where Alberta Street’s gentrification remains headline news.

However, the number of similar complaints posted locally to social media beg the question: How do you prove your bad restaurant service is a civil rights violation?

Nationally, high-profile cases that have raised eyebrows include the 2013 pat-down of Forest Whitaker in a New York deli and comedian Kamau Bell’s experience last February in a Berkeley cafe where a server tried to “shoo him away” because she thought he was harassing eaters. Both were addressed through mediation but in both cases the restaurants insisted the incidents were “not about race.”

The issue reached headlines locally in February after complaints that one public banquet facility and two restaurants had allegedly treated Black customers differently than white customers.

In addition to the Enzo’s incident, Portland Black PFLAG’s case against the Ambridge Center was resolved through mediation; and complaints against McMenamins’ Kennedy School are also headed toward a mediated solution.

Often the first stop in bringing a complaint is to file with the Bureau of Labor and Industry, which is generally the state agency that investigates and regulates such issues.

But attorneys interviewed by The Skanner News say it is very difficult to prove disparate treatment in a restaurant. But they offered a few tips that might help diners head off a humiliating experience, and possibly win in court.

One of the most important things to remember is that restaurant owners do not have the right to refuse service to anyone from a protected class – but if you become disruptive or threatening, that could be a game changer.

Attorney Greg Kafoury, who won a $105,000 judgment for a local African American falsely accused of shoplifting in an H&M store, says in any similar situation you should get all the details you can – name of the manager, name of the server, any witnesses if possible – and note the time, date and anything else that seems important.

Both he and Dennis Steinman, of Kell, Alterman and Runstein LLP, both suggested the same first step:

“Stay calm and go up to the manager and ask them whether they intend to serve you,” Kafoury said.

Steinman added that having your smartphone handy to record the conversation is not a bad idea, because the biggest obstacle to proving disparate treatment before a jury is lack of evidence.

A specialist in business franchise law as well as civil rights with a focus on the Americans with Disabilities Act, Steinman says many of the cases he sees right now involve disabled people with service dogs who are barred from restaurants.

“What I have found over the years when members of the protected class tell me that they know they've been treated differently because of their membership in a protected class, the vast majority of them are absolutely right,” Steinman says. “Their gut is telling them exactly what's going on, but proving it in court is a whole different issue.”

Having a straightforward dialogue with the restaurant staff is key in avoiding a he-said, she-said situation.

“I think you need to eliminate some of the other possibilities by going up to somebody and saying, did you perchance lose my order? It's been a long time since I ordered the hamburger, can you check on it?’

“If they say, oh yes it did get lost when you know it did not get lost, you'll have a much more difficult time proving that -- it's an assumption, but it's not something that any lawyer would be able to do anything with because there's no way to actually establish that it was on the basis of race,’ Steinman said.

“Anybody in that situation, regardless of race, if your food doesn't come out you're not going to sit back and say, ‘they're targeting me’ -- you're likely to get up and do something about it because you're hungry and it's been a ridiculously long time.

“So I would really encourage people to be proactive in a nice way– like anybody would say, ‘hey where's my burger?’ And if conduct persists I think that there might be something there.

“It's helpful to individuals who may be experiencing this situation to document that, because it establishes that it really is not what happens to everybody else.”

But Steinman stresses that each case of alleged discrimination is different, and that’s why it’s important to nail down any kind of evidence, witness or information to document the situation.

“It's all very fact-specific, and I wanted to make that clear also,” he said. “Each situation is unique and so it's dangerous to draw a blanket statement that says, ‘when this is done it's always discriminatory,’ or ‘when this is done you have reason to suspect them.’

“So you really need to look at the total picture to be able to analyze it.”

File a complaint with the Bureau of Labor and Industries here.