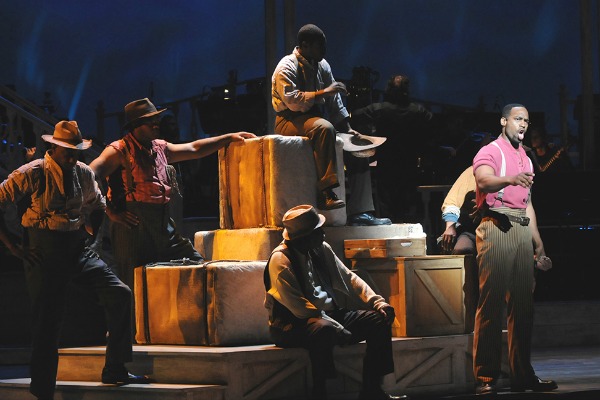 When the musical “Show Boat” opened at the Ziegfeld Theatre in New York City on December 27, 1927, critics were immediately enthralled.  Brooks Atkinson, writing for the New York Times, called it “unimpeachable” and “intelligently made.”

The production was adapted from Edna Ferber’s book of the same name. The story followed the lives of performers, crew and dock workers on the show boat Cotton Blossom as they pursue stardom, fall in love, separate and reunite.

“Show Boat” was the first racially integrated musical which had Black and white performers appearing and singing on stage together. Previous musical theater pieces would have Black artists performing in separate acts from white artists. It was also the first musical to feature an interracial marriage and characters who attempted to “pass” as white.

The Portland Opera is showing performances of “Show Boat” from May 1 – 9 and is hosting a series of events around Portland to explore the production in more depth.

The first event in the series is a guided discussion on how race is portrayed in the musical. Portland Community College Professor Carmen Thompson will join cast members Angela Renee Simpson and Arthur Woodley and the Portland Opera educators Bob Kingston and Alexis Hamilton in a panel discussion.

Portland Opera Communications Manager Ingrid Arnett said the panel discussion is a new addition to their outreach effort and an occasion to explore forward-thinking issues.

“’Show Boat’ did so much for musical theatre because it was so progressive for its time,” Arnett said. “Even now it presents a great opportunity to sit down and talk about these large issues – the struggle against prejudice, racism and economic injustice.”

The panel takes place at Highland United Church of Christ at 7 p.m. on April 7, it is free and open to the public.

Hamilton said the outreach for “Show Boat” is important because of the provocative nature of the work, which was set in 1895.

“It deals with race in the United States at that time,” Hamilton said, adding that the language used and the historical stereotypes can be uncomfortable, even when used to examine issues of social justice and prejudice.

The production of “Show Boat,” which has been remounted and revised many times in the years since 1927, becomes a reflection of racial attitudes at the time, according to Hamilton. Some versions would try to be politically correct by erasing any uncomfortable race stereotype or language and would instead focus on beautiful costumes and the love songs for white performers.

“Instead of mindfully portraying a time and space, and mindfully dealing with the racial issues, often productions have tried to mitigate it by just excluding it, not dealing with it,” Hamilton said.

The Portland Opera will perform the Hal Prince version, which was a 1994 revival of the show. Prince had a strong focus on the lives of the Black characters within the performance, showing the hard labor of the dock workers who live a life apart from the white folks.

Another focus of Prince’s version is white appropriation of Black art and culture. Magnolia, a white singer from “Show Boat,” thrives as a performer because she can sing with a “Black voice,” while the Black artists who taught her to sing could not reach the same success.

Hamilton believes the Prince take on “Show Boat” is an opportunity to pose large questions about race and privilege. She says the arguments found in the show still happen to this day.

Hamilton and Kingston will also host an “Opera in Depth” lecture on the history and social implications behind the show at the Hampton Opera Center on April 20.

One hour before every performance there will be free information session with Kingston. And after the show there will be a free 30-minute “Back Talk” Q and A with join General Director Christopher Mattaliano, performers and conductors.

Portland Opera has also partnered with the Hollywood Theatre to bring a film screening of the 1936 version of “Show Boat” directed by James Whale. The critically acclaimed film features the work of Paul Robeson whose rendition of "Ol' Man River" remains one of the most famous and loved versions to this day.