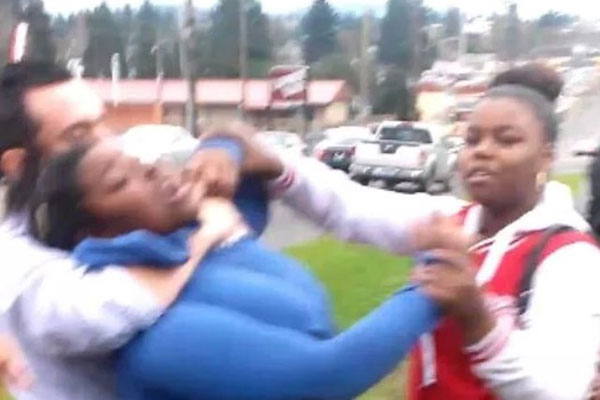 A Madison High School mother is taking a stand after her daughter was placed in a chokehold by a school vice principal during a minor scuffle off campus last winter.

Video has surfaced of the encounter, inflaming local parenting activists in part because of the recent death of New Yorker Eric Garner from a New York police chokehold which was also videotaped – but also because of the history of chokeholds in Portland’s Black community, which includes one of the most reviled incidents of law enforcement uses of force on record.

Thank you for sharing your concerns on behalf of a parent and student at Madison High School.

Your email was shared with me by the Office of the Superintendent to allow me to be a further resource.  PPS takes allegations of employee misconduct very seriously.  Because your concern regards alleged misconduct by specific employees, it will be addressed through the PPS Human Resources personnel process.  Your concern has been referred to the Chief Human Resources Officer, Sean Murray, and these allegations will be investigated thoroughly.  Lisa McCall, the Senior Director for Madison High School will be contacting you directly.

Please call me if you have any questions.  Thank you again for bringing this matter to our attention.

Images of the chokehold obtained by The Skanner News show the school official, identified by the family as as Vice Principal Alfredo Quintero, with both arms locked around the neck of the 15-year-old student as a second student holds the victim’s hands in a more relaxed gesture.

Debra McFarland says the other student in the photo was a stranger unknown to the family who was begging the school official to let go of her daughter’s neck.

McFarland says her daughter had been feuding with another girl on Facebook and that their conflict spilled over to the school; they had been fighting that day in the cafeteria, but they had been stopped by a security guard.

“If you want to fight her, fight her after school because I don’t want to do the paperwork,” McFarland says the guard told the girls.

According to witnesses, the two girls later faced off in front of a crowd that included at least one teacher and one security guard who both declined to stop the conflict.

After McFarland’s daughter popped the other girl in the face the fight stopped, the mother says – until the vice principal came running from his office and bumped into the daughter, sending her into the other girl and starting the fight up again.

With the vice principal bending her backward as he held her by the neck with both arms and the other girl pulling her hair, McFarland’s daughter says she felt like she was being “jumped.”

But even when the other girl stopped the vice principal did not; that’s when the second girl came closer and tried to calm the situation. McFarland says, “The young girl in the picture was asking, ‘why are you choking her?’”

McFarland says Quinteros held her daughter for about 30 seconds and aside from a trip to the emergency room for an asthma attack, she was not physically harmed – but now has chronic anxiety.

“The other girl had said, ‘f*** your grandmother’ –- and her grandmother had just died a few days earlier,” McFarland says.

“This replays in my head when I try to sleep at night,” McFarland says. “What if one day my child doesn’t come home from school?”

McFarland says the incident –- and a series of what she says are unethical moves by officials at Madison High School -- has derailed her daughter’s excellent grades and given the teen chronic anxiety.

“We are continuing to look at how we can improve our practices in these types of situations,” she said. “Neither one of the girls fighting that day was suspended, they were put into mediation.”

She said the district is still investigating what happened, and is examining the restorative justice programs that have just been put into place to help avoid violent conflict over the long term.

Because it involves both sides coming into an agreement over a given conflict, Miles said, “It is not a simple process, and it is not an easy fix.”

The 1985 Portland Police chokehold death of off duty security guard Lloyd D. Stevenson –- who had been helping a store owner subdue a suspected thief –- made headlines even in the New York Times.

While Stevenson, an African American, was a good Samaritan on the scene, police said he had “struck” one of their officers; he never regained consciousness after the chokehold maneuver.

On the day the dead man, Lloyd D. Stevenson, a father of five and a Marine Corps veteran, was buried in Willamette National Cemetery, two Portland police officers were suspended for selling T-shirts with the message: ''Don't Choke 'Em. Smoke 'Em.'' In police slang, ''smoke'' means shoot to death.

Racial tensions are normally subdued here, but Ron Herndon, co-chairman of the Black United Front, said, ''This is what you would expect from police hit squads in El Salvador.''

Even before the T-shirt incident hundreds of people protested at City Hall and the Justice Center, where the police headquarters is situated. Signs they carried read ''We Want Justice'' and ''Won't Take No More; Won't Stand No More.''

Find out more about the Portland Parents Union at www.portlandparentunion.com.