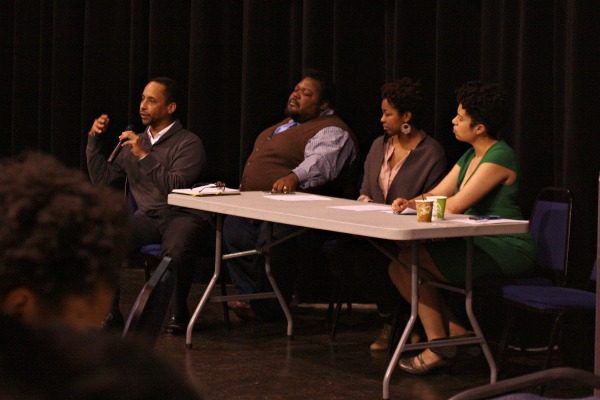 The short film “Future: Portland” played in the background as people gathered in the ballroom. It gave voice to a frequently displaced Black community that struggles to create a welcoming home.

The film was a fitting introduction for the Portland African American Leadership Forum (PAALF) meeting Thursday, where leaders came together to announce a coordinated effort called The People’s Plan.

Edward Hill, PAALF project manager for The People’s Plan, spoke about the importance of self-determination.

"The first act of a freed people is to shape its world in its own image and interest," Hill said to the crowd.

The People’s Plan seeks to flip the script on grassroots community initiatives and policy. Instead of conforming to the equity goals of current government and non-profit entities, organizers say, the plan will set and push its own equity agenda.

“Mainstream urban policy asks for equity, but that equity isn't centered around a vision for Black community,”Bates said, adding that the plan would "assert the right of black people to not only be in place, but to shape place."

The plan outlined a set of objectives including economic development, culture and arts development, personal safety development and urban planning. It proposes the question “what does Portland’s Black community want?” and asks to visualize a Portland that would reflect these values:

Health: To address the economic inequalities that lead to poor health outcomes.

Housing: To advocate for housing that supports an interconnected Black community.

Economic Development: To pursue financial prosperity for individuals and the community at large.

Arts & Culture: To have greater representation in culture through creative means.

Environmental & Just Sustainability: To advocate for environmental, economic, and social well being within our cities.

Among the leaders present at the reception were former State Senator Avel Gordly; Rev. T. Allen Bethel of the Albina Ministerial Alliance; and Midge Purcell of the Urban League of Portland. The small ballroom was nearly full with late-comers standing in hallway by the door.

Hill gave a call to action to the crowd, asking for their participation. Large sign-up sheets were distributed to each table asking people to contribute their expertise to the plan. The social media hashtag and twitter handle pdxpeoplesplan was announced.

Some in the crowd expressed hesitance toward the new plan. There were concerns on how to maintain a Black-centered policy without being excluded from mainstream discussion.

Purcell briefly spoke on past failures where plans like these were co-opted by white city planners. She mentioned the failed Albina Plan, which had heavy involvement from the Black community but never translated into actual policy.

Purcell passionately declared, “We will not allow our community to be betrayed again.”

Despite these reservations, there was hope that this effort would bring meaningful change.

Hill told The Skanner News the time is now for a significant grassroots push. He cited a growing body of scholarly analysis on the failure of urban planning, the displacement of earlier generations, and the heightened awareness of violence against Black people today.

Bates told The Skanner News that Portland is more receptive to conversations about racial equity than ever before.

“The city and region are recognizing that the path we are on -- in terms of racial disparity and class disparity and income inequality -- is not a good one for the health of the region,” Bates said. She said government bureaus are asking for solutions to equity issues and it is time to give answers from the Black community.

The plan also represents the evolution of PAALF from a grassroots leadership program to an influential but controversial flashpoint. The organization made waves last year in protesting the urban planning policy surrounding the Trader Joe’s development deal on Martin Luther King Jr. Boulevard. Since then, PAALF has been rethinking their role within the community.

PAALF Executive Director Cory Murphy said they learned from the encounter and have restructured as a stronger organization.

The group has also redoubled its efforts to convene and build coalitions of community organizations. Murphy said PAALF is dedicated to assembling these groups to work together for a larger impact.

“We are going to bring together all our folks under one banner to move our agenda forward.” Murphy said. “The People's Plan is a manifestation of that.”

For Gordly, the plan is a culmination of decades of work and community relationships. She believes this intention will take hold and transform Portland.

“In this room, you have people that respect one another, you have a long history of working with each other, and there is a quality of relationships,” Gordly said. “It's an exciting time to be an African American Portlander.”

To learn more, go to http://www.pdxpeoplesplan.org/