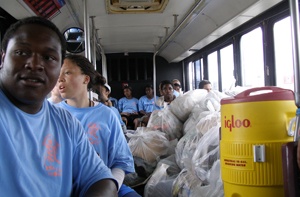 Craig Doby, left, and Ashley Richards, right, catch their breath after collecting a morning's worth of trash for the First Step program.

Driving around with a bus full of teenagers isn't most TriMet bus drivers' dream job, but for A.K. Rucker, it sure comes close.
During the summer, Rucker is in charge of the First Step cleanup crew, a group of about 20 teenagers who spend their summer picking up litter on about every major bus line in the city. On an average day, the crew will collect 75 33-gallon garbage bags, as much trash as a typical family might throw away in six months.
"We'll cover about four miles today," says Rucker. "And we'll do it quick."
With military efficiency, Rucker stops the bus and Craig Doby's team is out the door in a matter of seconds.
"Let's hit it," yells Rucker, who coaches football for Jefferson High School.
The 10 teens begin working the ground, picking up any piece of trash within eyesight. They move like a living, breathing street sweeper.
The bus moves several blocks ahead, unloading Bianca "BB" Bryant's crew. Both Bryant, 16, and Doby, 17, have been elected group leaders by their peers. Alongside their adult safety supervisor, the two teens direct their crew and make sure litter isn't left behind. They also ensure – along with the rest of the crew – no one is lagging behind.
"Hustle up boy!" says Bryant to one worker.
"You're not checking the bushes," she says to another.
While it may seem like just another summer job, Rucker and others know better.
"These kids are very aware of what's going on in their neighborhoods," Rucker said. "It spreads the wealth, helps the businesses all around and saves TriMet a lot of money."
When the First Step program started about 14 years ago, the program only hired gang members and other truly "at-risk" youth. Now the crew is mix of all types of youth. A few have straight A's in school, some came from the Self Enhancement Inc. magnet school, and others were recommended from parole officers. In all, 170 students – and they must be students – applied, but only 20 got in.
Of course, just because they got in, doesn't mean they'll stay. At the end of the second week, Rucker said he's had six workers quit. Nobody ever told them it would be easy, Rucker says, and some of the teens can't deal with the strict rules of the job. 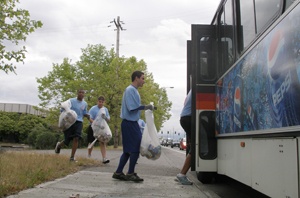 Robert Seals, right, and two of his First Step co-workers jump onto the bus after clearing several blocks of litter in outer Northeast Portland.

In this program's rigid chain of command, students bring their problems to their crew supervisor not to Rucker; crewmembers are only allowed in and out of the back door of the bus; and there's no back talk. Break any of these rules and a teen faces a two-day suspension from work. If they're not suspended, they might find themselves – and their crew mates — doing push ups or running laps as punishment.
Most of the students in the First Step summer program say they don't want to get into trouble. Many say they're in it for the money, the exercise and their community.
"This is a good environment," Deon Dhadwal says. "You meet good people. And it's a good thing to give back to your community."
Saharla Muhumed says she applied for the job because she wanted to stay in shape for boxing. Robert Seals wants the job so he can stay in shape for wrestling season.
Babatu White is here to help his community while staying in shape for football season and getting some discipline. Quindrae Blanton says the discipline helps motivate him.
"When they yell at you it's only because they're trying to make us better," he says.
By late morning, the two teams have cleaned several stretches of road in outer Northeast, and their pace is beginning to slow. The bags of trash are amassing in the middle of the bus. And so are the needles — supervisors have collected about six used hypodermic needles so far.
During one stop, Rhybon Mayfield hops on the bus. Mayfield is the program coordinator for Janus Youth Services, who partners with TriMet to provide some of the employees for the summer program.
"They need to know adults care about them," said Mayfield, who has been working with youth for most of his life. "It's not picking up trash or the discipline – the staff truly cares a lot about these kids. If you don't have it right here in your heart … we as adults can see through someone who is phony, and so can these kids."
Robert Hardy, a program supervisor, said the youth learn a lot about life while they're filling bags of trash. They learn to respect each other, work together as a team, respect adults and the value of being able to see results, Hardy says.
"There's something about sweating together that bonds them as a group," he says. "It's kind of like going to war together."
And although these First Step teens work for every penny they earn, making minimum wage for 40 hours a week, they continue to give respect to their elders.
"We work the kids very hard, but if you didn't care about them, they wouldn't work for you no matter how much you paid 'em," Hardy says.
And that respect transfers over to the teens' communities and public transportation. Rucker said the program has helped reduce graffiti and littering near the Tri-Met stops.
Minutes after Rucker finishes talking about encountering former employees – some who have done positive things with their life and some who have not – a young man pulls up and gives Rucker a hug.
Rucker points the young man out to the youth in this summer's First Step program.
"This is someone who used to be in your spot but is now going to college," he tells them.
Rucker admits that not everyone is successful after the summer.
"Some of them go bad, but at least they had a choice," he says.