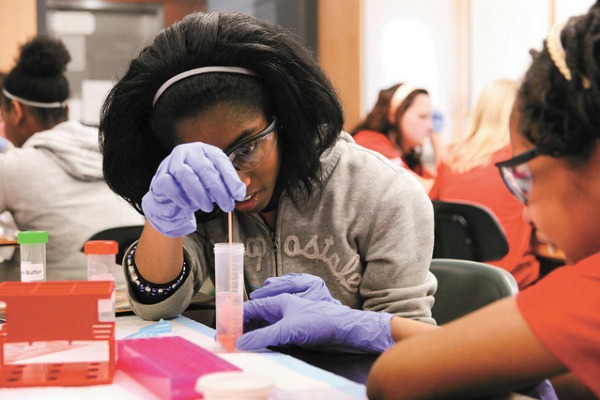 The gap in STEM education and employment for African Americans and Latinos undercuts a promising American economic opportunity. (photo courtesy of the U.S. Army)

A US Department of Education civil rights complaint brought by local science education advocates against the Portland Public School District has become a battleground for the future of one historically underserved school.

At issue is whether or not the Roosevelt High School remodel will provide a 21st century STEM (science, technology, engineering and math) education for the students in North Portland.

The complaint, filed on Oct. 2014, compares the design processes of the traditionally low-income Roosevelt to the more affluent Franklin High School, and alleges that the North Portland community has been shortchanged.

The PPS critics believe the Roosevelt design lacked the necessary STEM understanding. In contrast, Portland Public Schools Chief Spokesperson Jon Isaacs insists that the school is being designed with the most recent knowledge of modern education.

Whichever side of the debate observers support, two things are certain: Any expansion of Roosevelt’s STEM to catch up with Franklin’s will depend on future voter-approved funding measures – and the curriculum for the space has still not been finalized, weeks before its groundbreaking.

The remodel process of both Franklin and Roosevelt started at nearly the same time. The first design advisory group meetings for both schools occurred within three days of each other in June of 2013. Grant will plan its remodel during the summer of 2015.

Portland Public Schools established a set of education specifications which outlined how building design should support learning. The consultant team to develop this was led by the DOWA – IBI Group Architects, who were also the lead architects on the Franklin remodel.

The educational specifications were approved by the district in February of 2014 – eight months after the design process itself started.

PPS design meeting documents show the Franklin remodel had architects present at the second meeting. Bassetti Architects, the lead for the Roosevelt project, were not present until the fourth meeting -- nearly four months into the project.

According to the complaint’s chief petitioner, technology educator Donna Cohen, the Franklin STEM program was accurately defined in the specifications as well as the subjects under the STEM umbrella: woodshop and metal fabrication, computer labs, robotics, software design, and more.

“Franklin followed to a ‘T’ what STEM was and the subjects that encompassed STEM, whereas Roosevelt really didn’t have a clue,” Cohen said.

Isaacs fundamentally disagrees with this assessment and said the architects for Roosevelt had a draft copy of the educational specifications which they were legally required to follow. The PPS vision for the school is a modern space with collaborative environments interspersed throughout the building.

In the Roosevelt design, the high tech side is put in a separate location from the low tech side, creating a computer lab and, separately, a traditional woodshop.

For the school district’s critics, the decision to split these technologies is a fatal flaw of the Roosevelt design. The group believes that side-by-side access to both high and low tech is the key to teaching STEM to kids with diverse backgrounds.

“[STEM] brings in students from all different interest levels -- kids who think they are not interested in computers but they see something being built and they want to go do that,” Cohen said. “Or they are used to computers and they have never used applied science or applied math.”

Not only are the facilities split, but the traditional wood and metal shop are connected to the performing arts program at Roosevelt. Officials say it will be used as a scene-building shop at the back of the theater department.

The critics say this takes Roosevelt’s shop out of the arena of science education and lands it squarely into arts education instead.

The complaint asks that the two spaces be built next to each other so that students get the full use of a complete “maker space” – essentially a lab for building projects -- without having to walk across the school to cross the high-tech/low tech barrier.

The district’s critics believed this was a small thing to ask for. Their early interactions with PPS were not as contentious as they are now, and the group proposed a number of solutions they believed would better inform the design process.

They submitted to district officials a 300 page dissertation from 2010 on engineering lab requirements from Paul W. Camick, who has a Ph.D in Technology Education from the University of Georgia. This “Delphi study” was a round-robin of 30 experts who came to agreement on an ideal STEM lab environment. One of their best practices was one large STEM lab that contained four types of learning environments:

In other words, the dissertation defends the idea of contiguous space with generous room to teach and collaborate.

The PPS critics also asked to bring in the experience of John Niebergall and Don Domes, technology educators who created impressive STEM labs at Sherwood and Hillsboro high schools, respectively.

School district officials say they don’t believe these changes need to be made, and that they have full confidence in Bassetti Architects, who have won numerous awards for their renovation of historic high schools.

Isaacs believes splitting the maker space shouldn’t have any effect on collaboration between the proposed separate spaces.

"The two maker spaces have large industrial doors, there is half a football field between them, students and staff are going to be able to roll modern machinery back and forth between the two as necessary," Isaacs said.

According to Isaacs, any difference between the schools can be attributed to two factors: curriculum and enrollment. Franklin is expanding on their current technical education whereas Roosevelt is in the process of developing five new career technical education programs.

One thing is clear however – the curriculum itself has still not been finalized, although the district is set to break ground May 2, according to documents obtained by The Skanner News.

Franklin has an estimated 1,552 students and Roosevelt has 947 students.  After the remodel, Franklin will fit 1,700 pupils and Roosevelt 1,350. As Roosevelt’s enrollment grows, district officials say it will expand to 1,700 students within a decade.

Isaacs asserts that the design will be flexible -- the maker spaces are designed to expand through future construction as Roosevelt fills up.

To see the diagram of Roosevelt, click here. The areas shown with blue and red lines are the spaces to be expanded in the future.

The money to do that would need to be approved by voters in a future bond measure or taken out of reserve funds, Isaacs says.

In the meantime, the district’s critics fear the Roosevelt community is going to end up with an inferior STEM education.

The civil rights complaint is currently being evaluated by the U.S. Department of Education regional office in Seattle. If the complaint is found to be valid, then that office will launch an investigation.

Cohen acknowledges that the complaint cannot stop the upcoming construction.She hopes her efforts shine a light on the institutional racism she believes affected the end design.

“It is a vicious cycle of neglect, your focus is elsewhere, and the communities with more power -- which tend to be white, higher-income communities -- have the resources to get what they need and what they want,” Cohen said. “The other schools don’t.”

Read Part 1 of this article here.

To keep updated on the Roosevelt modernization visit the PPS bond site.