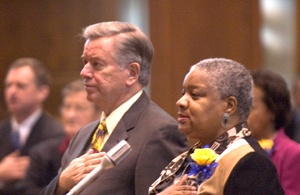 Sen. Avel Gordly, I-N/NE Portland, right, is sworn in as a state senator after being re-elected in 2005. Beside her is her guest, Portland Mayor Tom Potter.

Oregon's first elected African American female senator is leaving politics for a career in higher education.
Sen. Avel Gordly, I-inner N/NE Portland, announced late last week that she will not seek re-election when her term ends in 2009. Instead, the senator who has championed quality education for all children will join her alma mater, Portland State University, as an adjunct assistant professor in the Black Studies department, where she will "focus on understanding and fostering the development of African American servant leadership and public service."
Gordly, who recently gifted nearly 30 years of her personal papers to the PSU Library and the Department of Black Studies, quotes Nelson Mandela when talking about her move from politics to higher education: "Education is the most powerful weapon which you can use to change the world."
"I look forward to taking on new challenges, to seizing the opportunities that Portland State offers to expand the role of African Americans and other people of color in the legislative process and to develop a youth leadership institute to help Oregon groom and retain potential leaders for our state," Gordly said in a speech delivered on the Legislature's last day of the 2007 session. (To read the speech in its entirety, see page 4.)
"We are losing too much of this talent to other states, because as a state, we are not working aggressively enough to keep it," Gordly said.
A native of Portland, Gordly has served Oregonians in the public sphere for nearly two decades. She was elected to the Oregon State Senate in 1996 after serving three terms in the House of Representatives, and is serving her current term as the only Independent in the Senate.
Throughout the years, Gordly has been an advocate for Oregon's minorities, serving on the Governor's Racial and Ethnic Health Task Force; petitioning for the passage of Measure 14, which removed racist language from the Oregon Constitution; and expanding educational opportunities for at-risk youth with the passage of her Expanded Options bill in 2005.
In 2006, Gordly spoke at a PSU rally in support of immigrant workers and likened this country's treatment of "illegal immigrants" to the way other minority groups have been treated throughout America's history.
"I want to tell you something about being 'illegal,' " Gordly said in that speech. "We all need to study our history ... when Oregon's Constitution was enacted in 1857, it declared all African Americans within the state's boundaries 'illegal.' The Oregon Constitution stated that no Black person could live anywhere in this state. Such is the power of bigotry and hate.
Some legislators ... will essentially use the same arguments that were used to condone slavery; that were used to deny free Blacks the right to live in the state of Oregon; that were used to imprison innocent Japanese families during World War II; that were used to prohibit Chinese people from emigrating to America; that were used to prohibit women from voting; that were used to deny Native Americans the right to speak their own languages, to live in their own homes, even to survive as human beings.
That is the nature of the opposition we face today, that we will face tomorrow, next week, next month, next year. ... But we need to meet that opposition with organization and commitment and dedication and voices raised in support of justice. No human being is illegal."
Gordly's work in the Oregon Senate is not over. The Independent senator will finish out the rest of her term, which concludes in 2009. And she has high hopes for next session.
"It is my hope and prayer that the next legislative session will focus on revenue reform; a rejection of partisan politics; securing a quality, culturally competent education for all of our students; and on setting an Oregon table that values all of its people, including the people who put the food on that table and those who clean up afterward," Gordly says.