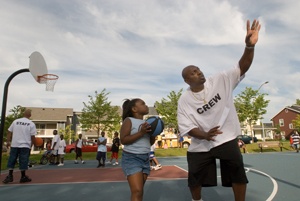 CREW leader Pernell Brown, right, teaches 7-year-old Jazmine Rivers how to shoot a lay-up on June 26 at the basketball courts at New Columbia. In the background, other CREW staff members teach older youth.

Like a picture perfect painting of American life, evenings at McCoy Park in New Columbia have been a gathering spot for the neighborhood's residents. Mothers and fathers are out congregating at the covered picnic areas; residents are tending their community garden; and children are everywhere – on bikes, on the playground, on the basketball court and on the climbing wall.
For the second year in a row, Pernell Brown is spending his evenings hanging around the New Columbia's basketball court. Standing over six feet, with a scar over his left eye, Brown is an imposing figure. Even the roughest kids on the block don't mess with this guy. But looking tough has its benefits. It helps convince impressionable young boys and girls that joining gangs isn't cool – something Brown, an ex-gang member who turned a new leaf after serving prison time, does every day at New Columbia.
As the director of a program known as "the CREW," Brown, along with his diverse group of outreach workers, strives to keep New Columbia's youth away from violence, drugs and gangs.
This summer, Brown introduced a free basketball camp at New Columbia's McCoy Park to teach youth ages 6 to 16 the basics of basketball – lay-ups, free throws, dribbling – before engaging them in friendly scrimmages.
Brown says his program helps bring order to a court that was formerly in disarray.
"Before this, they didn't know their fundamentals," Brown says, while helping 7-year-old Jazmine Rivers work on her shooting skills. "They just know about shooting the ball or copying the stuff they see on TV."
Brown formed the youth outreach program with his wife, Ashley Brown, two years ago. CREW – or Children Respecting Each Other Worldwide – helps youth at New Columbia into make positive decisions.
Brown and his seven other CREW members get to know these children and teenagers by name. They ask them about their lives and their neighborhoods, and try to be positive male role models in their lives. They want to make sure the neighborhood doesn't become a haven for gangs, as Columbia Villa once was. Brown knows how dangerous that can be. Before he ran CREW, he was a gang specialist with the Northeast Coalition of Neighborhoods and Emmanuel Community Services. And before that, Brown was a gang member himself, serving time in prison before he joined the Nation of Islam. Now, he works with other ex-gang members to help pave a new path for the next generation at New Columbia.
Carl Rucker, a CREW member and ex-gang member, says it helps knowing the warning signs and it also helps to have first-hand experience.
"Sometimes a little conversation goes a long way with these kids," he said. "They want someone to relate to them."
Donning baggy jean shorts and a white CREW T shirt, Rucker said much of CREW's success is due to respect. Members of the CREW are out at New Columbia everyday.
"A lot of programs don't have the heart to really help the kids," he says.

Beyond the basketball courts

The CREW leaders aren't just coordinating basketball drills. Each day, they're working to keep these youngsters in line. Brown and his volunteers are usually some of the only adults near the basketball court, and Brown says the adults help keep these kids in check. When a teenager cruises by on a bike that's two sizes too small for him, Brown asks, "Where'd you get that bike?" It turns out the teen borrowed the bike from his younger brother.
"When we meet and greet 'em, they know us by name," Brown says. "So when you see a kid and tell him to stop cussing, its nothing negative cause they know you … they'll say 'my bad,' … they'll take a look at their behavior."
Some of what the CREW does involves gang prevention work. Brown and his volunteers try to figure out which of the teens and pre-teens they see on the basketball court each afternoon are borderline gang members – a task that Tonya Dickens, the director of Brothers' and Sisters' Keepers, said is necessary to curb violence and gang membership.
"I don't think they ever left," she said of gangs in the New Columbia area. "Like any organization, times change and people change with the times."
Dickens, who worked with Brown at the Northeast Coalition of Neighborhoods, says the CREW leader was an effective gang outreach worker in a culture that causes many to burn out.
"If you come to do this as a job, it's the wrong place," she says. "It takes passion. … And there's a lot of turnover, for a variety of reasons."
Brown may have been a bit burned out when he left the Northeast Coalition of Neighborhoods and formed CREW. Responding to shootings or assaults took an emotional toll – "I was always responding to negativity and there's something positive out here," he says, adding that he gets a lot more satisfaction working with children — and their families — who have not yet joined the gang lifestyle.
Brown still runs into gang members he used to work with.
"A lot of my old case load is out here," he says. "They live out here together, so they get along because they know bringing negativity jeopardizes their housing."

'Amount of fighting has dropped dramatically'

While Brown is working with youth out at the park, his wife, Ashley, is working with them in the classroom. She leads a discussion group called Teen Summit at 6 p.m. on Mondays, Tuesdays and Fridays in the Community Education Center, 4625 N. Trenton St. (across from the fountains on the south side of McCoy Park.) The discussion group allows teens to ask tough questions, vent concerns and learn about important things – sexual protection, drugs, gangs, relationships and education.
And in an attempt to connect New Columbia's generations, Pernell Brown also leads a group of seniors on walks to get them acquainted with their community on Thursday evenings.
The kind of work that Brown and other groups do is essential for reconnecting the social fabric of the old — Columbia Villa residents — and the new — New Columbia residents, says John Keating, assistant director for Community Building with the Housing Authority of Portland.
Right now, CREW is the only small community outreach group that has a contract with the Housing Authority of Portland to provide outreach services, but they're not the only ones trying to improve the quality of life at New Columbia. The Boys and Girls Club, Urban League, Brother's and Sister's Keepers, the YWCA and many others are trying to make New Columbia – the Housing Authority's largest public housing project – a friendlier, more welcoming place to live.
People in the community have seen results since groups like Brown's started working at New Columbia.
"Since (CREW) has shown up here, the amount of fighting has dropped dramatically," Keating says.
The temptation to compare Columbia Villa and New Columbia should also stop, he adds. For all the bad press the Villa had, Keating says it was a very well connected community, something that they're working on for New Columbia. But it takes time for everyone to get to know each other.
"There are pieces of the Villa we need here now," Keating says.

One child at a time

Back on the basketball court, Brown is working – one child at a time – to bring peace to New Columbia.
As the other kids line up for basketball drills, Brown brings Jazmine Rivers, 7, a new pair of basketball shoes.
"All the kids will get them at the end of the summer," says Brown. But Rivers needs them now. Unfortunately, Brown doesn't have the right size for Rivers' tiny feet. But that doesn't stop the second-grader from shooting hoops.
As Rivers gets closer to making the basket, Brown shouts his encouragement.
"That was a shot!" he says. "That looked like me."
Positive reinforcement is a staple at the CREW's summertime basketball camp. Brown's assistant basketball coach runs a portable lunch van and the players can earn free hotdogs and ice cream for accomplishments like making 10 free throws in a row or picking up trash around the court.
The work is rewarding but Brown won't be hanging around the basketball courts the rest of his life. He dreams of opening an all-boys public charter school. Until that day, Brown will keep showing up seven days a week, "just being a father to these kids, and to let them know there is someone out there who cares." 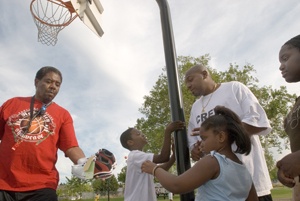 From left to right: Earl Chaney, a volunteer with CREW, left, hands a pair of athletic shoes to 7-year-old Jazmine Rivers while CREW leader Pernell Brown, second from right, Ni-dir Hodges, 8, second from left, and Jazmine's big sister, Lakeshia Rivers, 12, right, look on. Jazmine shows up at the basketball court every day to try her hand at shooting hoops, but the basket is still too tall for her. Brown vows to get one her size, even if he has to buy it himself.