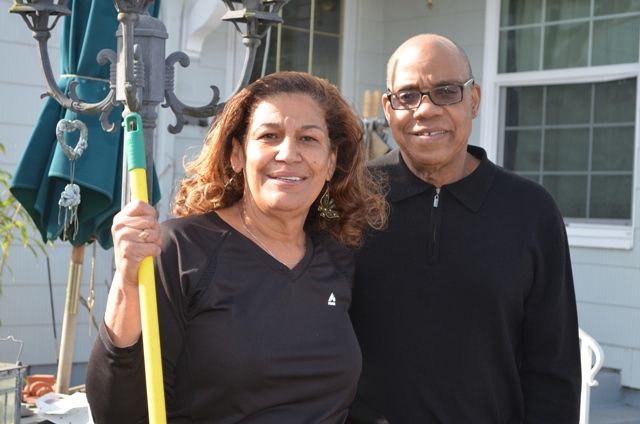 Kathleen and Percy Hampton in front of their home near Northeast 10th and Alberta Street. Their planned romantic dinner on Valentine's Day has ended in a lawsuit alleging disparate treatment at a nearby restaurant. Jerry Foster photo

An Italian restaurant on Alberta Street, hit this week by a lawsuit alleging denial of service on Valentine’s Day, has mostly positive reviews.

But The Skanner News’ look at the restaurant’s Yelp turned up a second allegation of denial of service by another customer of color that same night.

Kathleen Hampton, a 50-year resident of the Alberta Arts District and a small business booster, filed a lawsuit last week against Enzo’s Café Italiano, alleging that she was denied service on Valentine’s Day and humiliated in front of other customers. She is asking for $100,000 in damages.

She has also moved to file a complaint with the Oregon Bureau of Labor and Industries, which enforces civil rights laws that prohibit discrimination in commercial establishments.

The lawsuit follows two other recent discrimination complaints against local businesses, starting with the Ambridge Center where the manager refused to allow Black PFLAG (Parents and Friends of Lesbians and Gays) to hold a history month event.

The second case involves McMenamin’s Kennedy School, where African American grassroots organizer Sheila Warren of the Portland Parents’ Union initiated a Change.org petition alleging a server at a restaurant there wrongly accused the group of leaving without paying after a business meeting with Portland Public Schools representatives last month.

The Ambridge Center case has been resolved through mediation; Warren says she is currently working on a response to the Kennedy School incident and she’s calling for others with similar experiences to contact her at [email protected]. At least one family already has.

While news reports so far this week have made Hampton a subject of public ridicule, a quick scan of Enzo’s Yelp page shows several unhappy customers on that night – as well as one other person of color who claims he and his partner were refused service.

[editor’s note: expletive deleted] I come here, or at least used to now. But on valentines day some Asian waitress here was the epitome of racism. Made us sit outside in the cold and then never showed up. Americans behind us sat inside and were served wine ASAP. The chef here is a very nice person but he should not hire such morons. Anyway, never again. We came here because we wanted to goto a friendly place but alas. Food is so so. Their buffet used to be good but now they don't have it.

Hampton told The Skanner News that she made reservations at the restaurant after meeting the owner during a neighborhood walk; she says he was charming and talked at length about his homemade pasta and bread.

But after her husband, Percy, decided he did not want to go out, she says it felt wrong to cancel the reservation at the last minute – besides, she was eager to try the food.

“I was finally seated after people who came after me were seated,” Hampton says. “I was not getting service; I finally said I was ready to order and the waitress told me she was not taking my order and that I had to leave and give up my table.”

In the small restaurant, Hampton says all the other customers watched her as she was rousted from her table and forced to leave, even being denied a to-go order.

“I was so hurt, I’ve never experienced this before, here in Portland,” she said. “I’ve never heard of a place not having to-go."

The Skanner News’ attempts to obtain comment from the restaurant owner have been unsuccessful, but he has commented to The Oregonian and KOIN news.

The Oregonian reports that the owner, Enzo Lanzadoro, is accusing Hampton of “stealing” two glasses of wine.

Enzo’s has a great rating on Yelp, but the small trickle of customer criticisms over time appear to be consistent – in particular a pattern of customers served wine without asking for it and then being charged for the beverage. One customer reported that a server poured wine into her husband’s beer glass and then charged them for it.

They opened a second bottle of wine that none of us ordered.
Where and when does that EVER happen???

I was finished with my glass of wine and the server asked if I'd like another (as a good server should). I said I didn't think I'd be up to another glass, but he kept pushing. After going back and forth for a while I relented at being served a "half glass." He then preceded to pour me a full glass. A moment later another server came by and told our server that "he" (she motioned to a man in the kitchen) wanted our server to pour my partner a glass of wine too. My partner was drinking beer and had just finished it, so our server poured my partner a glass of wine into his empty beer glass without really asking. We figured that they really needed to get rid of that bottle of wine and that's why they were so pushy so we just shrugged it off. I am a server/bartender and I give out free drinks all the time when the bar I work at needs finish something off so I didn't think twice about it. We drank half of our wine and decided to pay the bill and leave.

When the bill came we saw that we had been charged for the two glasses of wine that we didn't even want! That added an extra $20 to our already steep bill.

Hampton, who founded a small business in construction that has now been taken over by her son, says she’s seen her share of discrimination against African Americans on Alberta Street over the years – but the snub by Enzo’s struck her to the heart.

She never saw Enzo himself that night, and when she went back to the restaurant the next morning to talk with him about it she was greeted by the same manager from the night before, who brushed off her complaint and, she says, declined to put her in touch with Enzo.

“I have a footprint in the neighborhood,” she says. “I am a small business owner myself, and I have worked with the King Neighborhood Association and other groups to help make Alberta Street friendly to small businesses.”

Hampton is representing herself in court.

“I was so devastated I cried all night,” she says. “I don’t want this to happen to anyone else."