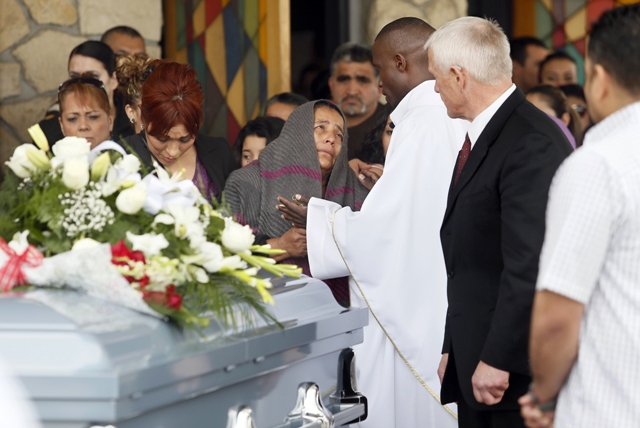 SPOKANE, Wash. (AP) — An independent autopsy of an unarmed Mexican man killed by police in Washington state shows he was shot as many as seven times — including twice from behind — contradicting earlier statements from authorities, an attorney for the man's family said Thursday.

The second autopsy was commissioned by lawyer Charles Herrmann, who is representing Antonio Zambrano-Montes' estranged wife and two daughters.

Its findings came a day after a spokesman for a special unit investigating the Feb. 10 shooting said five or six bullets struck Zambrano-Montes, but none from behind.

"Our report differs sharply with statements made by local law enforcement authorities," Herrmann said in a statement.

Zambrano-Montes, a 35-year-old Mexican immigrant, was shot after throwing rocks at officers. His death has prompted calls for a federal investigation, along with a series of demonstrations in Pasco, an agricultural center with 68,000 residents about 130 miles southwest of Spokane.

"The report reflects a total of as many as seven rounds striking Zambrano," the attorney said. It also found entry wounds on the back of the victim's right arm and one buttock, he said.

The independent autopsy determined the Pasco orchard worker also was shot in the face, stomach, chest, arm and scrotum, according to a diagram provided by Herrmann.

Lattin is a spokesman for the regional law enforcement task force examining the shooting. On Thursday, he referred questions to county prosecutor Shawn Sant, who did not immediately return a telephone message from The Associated Press.

The final medical examiner's report is not yet finished, but could be done within a month, Lattin said Wednesday.

He said investigators have determined three officers fired a total of 17 shots. Police have not said how many shots each officer fired, or whether bullets from all three officers struck Zambrano-Montes.

Lattin said the autopsy results showed Zambrano-Montes was shot five or six times, but "there were no shots in the back."

The afternoon of Feb. 10, Zambrano-Montes was throwing rocks at passing vehicles and later at responding officers, authorities say.

Video taken by a witness shows the man running from officers. As the officers draw closer, he stops and faces them. Multiple pops are heard, and he falls, twisting, to the ground as the pops continue.

Zambrano-Montes' death at a busy intersection has sparked two weeks of protests in Pasco, where more than half the residents are Hispanic but few are members of the power structure or police force.

Additional protests are planned for Saturday.