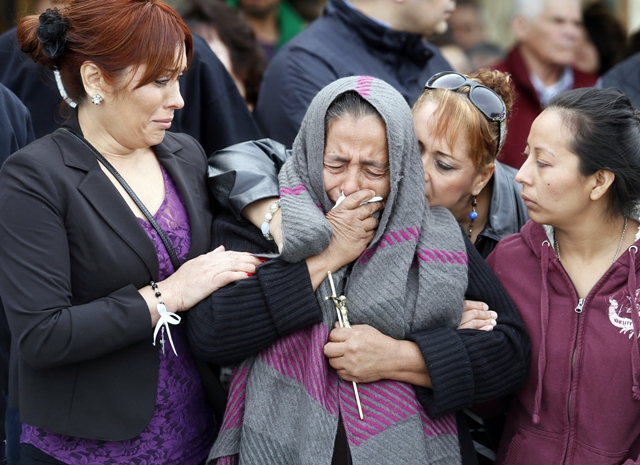 Agapita Montes-Rivera, second from left, the mother of Antonio Zambano-Montes, is comforted following the funeral for her son Wednesday, Feb. 25, 2015, at St. Patrick's Catholic Church in Pasco, Wash. Zambrano-Montes' Feb. 10 death in the agricultural city of Pasco has sparked protests and calls for a federal investigation. Police killed the unarmed man who spoke little English after he allegedly threw rocks at officers. (AP Photo/The Tri-City Herald, Andrew Jansen)

KENNEWICK, Wash. (AP) — Three officers fired 17 shots at an unarmed Mexican man in Washington state, and five or six of the bullets hit him in a deadly shooting that has led to weeks of protests and calls for a federal investigation, authorities say.

None of the shots struck former orchard worker Antonio Zambrano-Montes in the back, Kennewick police Sgt. Ken Lattin said Wednesday. Lattin is the spokesman for a regional law enforcement task force investigating the Feb. 10 killing in the nearby agricultural city of Pasco in the southeastern part of the state.

Because full autopsy results are pending, Lattin said at a news conference he couldn't be more specific about where on Zambrano-Montes' body the shots struck.

The high-profile attorney who represented the family of Michael Brown, a black man killed by a police officer in Ferguson, Missouri, said he'll represent Zambrano-Montes' family. Benjamin Crump was in Pasco meeting with the family Monday.

"At the heart of the matter is what's going on with what we see on that video - is it appropriate or not?" Crump, who is based in Florida, told The Associated Press.

"The No. 1 thing they said is, 'We don't want them to say that the police acted appropriately," said Crump, who represented the family of Trayvon Martin, the black teenager killed in a confrontation with neighborhood watch leader George Zimmerman. Zimmerman was acquitted in 2013 in that case.

The Mexican immigrant was throwing rocks at passing vehicles and later at responding officers, authorities say. Video taken by a witness shows Zambrano-Montes, 35, running from Pasco officers. As the officers draw closer, he stops, turns and faces them. Multiple pops are heard and then he falls to the ground.

Zambrano-Montes' death at a busy intersection has sparked two weeks of protests in the city where more than half the residents are Hispanic but few are members of the police force or the power structure.

The Franklin County coroner has ordered an inquest into the death, and federal authorities have said they are monitoring the local investigation. It will be thorough and fair, Lattin said.

"We're not here to cover up for anybody," he told reporters.

Lattin said a rock was found next to Zambrano-Montes' body, but no gun or knife.

The killing was the fourth by police in less than a year for fast-growing Pasco, a city of 68,000. Officers were exonerated after similar investigations in the first three cases.

About 100 mourners gathered Wednesday at St. Patrick's Catholic Church in Pasco for Zambrano-Montes' funeral Mass. His body was to be returned to his small hometown in a rural part of Michoacan, Mexico, the Tri-City Herald reported.

Protesters and the American Civil Liberties Union are calling for a federal investigation. Critics say the officers should have used less than lethal force to capture Zambrano-Montes.

Felix Vargas, a Hispanic leader from Pasco, said he met with a federal official last weekend and planned to meet with U.S. Attorney Michael Ormsby to discuss the case.

"I do not think these authorities can conduct a truly impartial investigation of their brother officers," Herrmann said. He also doubted that Franklin County Prosecutor Shawn Sant was inclined to bring charges against the officers involved.

"The Zambranos are going to have their day in court," Herrmann said.

Widow Teresa De Jesus Meraz-Ruiz, who lives in California, was "devastated" by the shooting, the attorney said. The couple has reportedly been estranged since 2006.

Meanwhile, Lattin said the special investigations unit, made up of officers from four neighboring cities, was awaiting final toxicology and other lab reports before sending its final report to the prosecutor. He predicted that would take several more weeks.

It would take about 60 days after the report is finished to begin the coroner's inquest, Sant said. The contents of the report will be released during the inquest but not before, he said.

The family also commissioned its own autopsy.

Officers continue to seek details of Zambrano-Montes' whereabouts in the weeks before the shooting. His home had recently burned and he had stayed for a time in a homeless shelter, but no one has yet been able to account for his actions in the two weeks prior to his death, Lattin said.

Officers want to know if he was suffering from mental health issues, drug use or an injury, Lattin said.

Zambrano-Montes was arrested last year for assault after throwing objects at Pasco officers and trying to grab an officer's pistol, court records show.