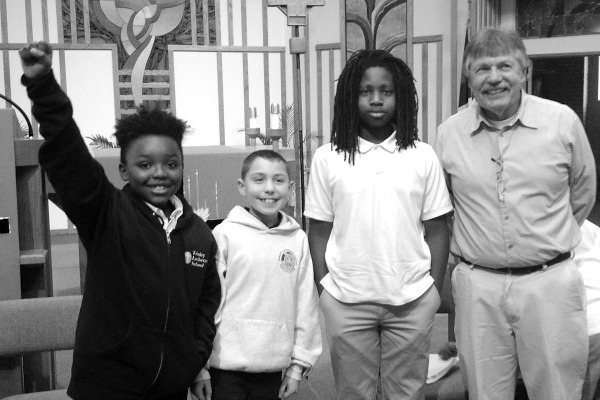 “He told me last year that he wanted to win next year as he watch as a third grader,” his dad, Ime Etuk, said. “He worked really hard to prepare to compete against eight graders.”

Uwem’s father is a film director and producer who owns Laugh, Cry, Love Entertainment, LLC; he graduated from Trinity Lutheran School in 1989 and is currently on the TLS Board Education.  He went on to graduate from Thomas Jefferson High School; Clark Atlanta University in Atlanta, Georgia; and the Directors Guild of America Producer Training Plan.

Etuk moved back home to Oregon to be closer to family and base his film production business out of Portland after spending years in Hollywood, California. He recently directed an ad for Columbia Credit Union that aired during the Super Bowl on national TV.

Thousands of schools around the United States and in the five U.S. territories are participating in the 2015 Bee. The school champions, including Uwem, will take a written test; up to 100 of the top scorers on that test in each state will then be eligible to compete in their state Bee on March 27, 2015.

Award-winning journalist Soledad O’Brien will moderate the national finals on May 13. The program will air on television.

Everyone can test their geography knowledge with the exciting GeoBee Challenge, an online geography quiz at www.nationalgeographic.com/geobee, which poses 10 new questions a day, or by downloading the “National Geographic GeoBee Challenge” app, with more than 1,000 questions culled from past Bees.