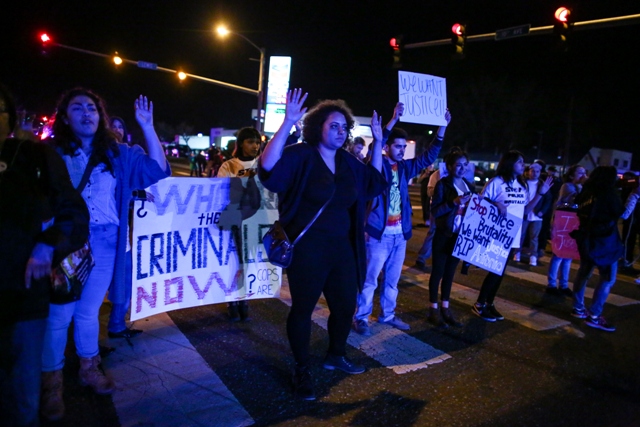 People gather in an intersection to stop traffic during a rally for Antonio Zambrano-Montes, Saturday, Feb. 14, 2015, in Pasco, Wash. Zambrano-Montes was shot and killed by Pasco police in Pasco on Tuesday. (AP Photo/seattlepi.com, Joshua Trujillo)

PASCO, Wash. (AP) — Hundreds gathered in southeastern Washington on Saturday to protest police brutality in the wake of a deadly shooting of a man who had been throwing rocks at the police.

Before the midday rally, children and adults hand-lettered signs, calling for justice for Antonio Zambrano-Montes, who witnesses say was running away when police fired on him Tuesday in a busy intersection.

A large sign hanging over the bandstand at Volunteer Park said, "Stop Police Brutality: It was just a rock!!!" Hand-lettered signs said, "Use Your Training, Not Guns," and "Good Police We Respect You."

Speakers from the community called for a full review of the Pasco police department and its policies.

Felix Vargas, chairman of Consejo Latino, a group of primarily Hispanic business leaders, called for a federal investigation into the shooting.

After the rally ended, KNDO-TV reported that a smaller group of demonstrators blocked traffic in the area of 10th and Lewis streets. Officers took control of the intersection with no resistance. There was no word of any arrests or further problems.

Four people have been shot and killed by police since last summer in this agricultural city of 68,000, where about half the population is Hispanic.

Following the gathering at the park, the crowd chanted and marched to Vinny's Bakery, where the shooting took place. The march was led by members of Zambrano-Montes' family.

The family of the orchard worker, who was a citizen of Mexico, has filed a $25 million claim with the city of Pasco, the first step toward a lawsuit.

Franklin County Coroner Dan Blasdel has decided to order an inquest, which would be open to the public, in hopes of calming "some of the fears and outrage of the community."

While an inquest won't proceed until police finish gathering evidence and witness statements, "it's going to make this whole investigation transparent," Blasdel said.