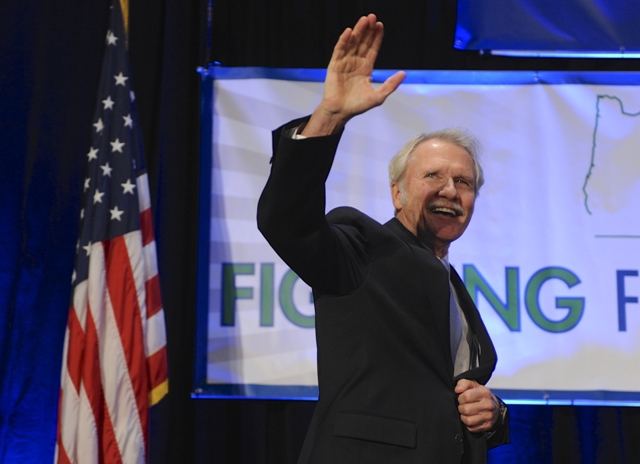 After months of criticism, the launch of FBI and state-run investigations into his activities – and even a bit of heckling on national television – Oregon Gov. John Kitzhaber Friday afternoon announced his resignation.

The move paves the way for Oregon Secretary of State Kate Brown’s succession; she will be the first openly LGBT governor in office in U.S. history, according to the Human Rights Campaign, based in Washington D.C.

“Few are better prepared to lead the great state of Oregon than Kate Brown,” the organization said. “She's a known commodity to Oregonians with a distinguished record of service of over two decades. And while she'll make history as the nation's first sitting LGBT governor, the more important truth is that she's supremely capable of leading the state to better days ahead.”

Oregon Attorney General Ellen Rosenblum’s office last week announced a criminal investigation into Hayes’ alleged use of her position as Kitzhaber’s fiance to earn consultant contracts with outside organizations that were also lobbying the state on policy issues; the pair also faces three ethics complaints filed in 2014 with the state Ethics Board.

“Today is a sad day for Oregon,” said Rosenblum. “I want to thank Governor Kitzhaber for his service to our state. The governor’s decision to resign will not affect our ongoing criminal investigation into allegations of his and Ms. Hayes’ conduct. Oregonians deserve nothing less than a full and fair investigation of all the facts, as well as the opportunity to reach a resolution that will truly allow our state to move forward.”

Former Oregon State Sen. Avel Gordly, who spent many years in Salem – and famously quit the Democratic Party before leaving office to become an independent in 2006 due to what she described as excessive partisanship among lawmakers -- called on Oregonians to take ownership of the state’s political system by returning to a tradition of “servant leaders.”

“This is a day and time of reckoning for all Oregonians,” Gordly said in a written statement to The Skanner News. “This day is not just about the tragic fall of one man forced to resign from office. We Oregonians get to look in the mirror and examine our role in the unfolding events.

“We need to ask why it is that we have, for so long (at least three decades), tolerated and touted people and a political system that rewards nepotism, cronyism, old boy, old girl deal making- all behaviors framed in the arrogant and excluding belief that one party rule is a healthy condition that will foster inclusion and progress in our state.

“We desperately need new servant leaders. We need people who believe and act in a manner that presents public service as a noble calling and profession. We need more and inclusive servant leaders who, grounded in integrity and ethical behavior, will actively work to call out, reject and replace the toxic status quo way of doing business in Oregon.

Meanwhile, Kitzhaber’s friends and political allies issued statements of support for him as he leaves office.

“John Kitzhaber loves Oregon deeply and has contributed enormously to making our state a better place,” said US Sen. Jeff Merkley, D-Oregon. “Today, he did what was right for Oregon by resigning.

“I know that our incoming Governor, Kate Brown, will continue the fight for our Oregon values, from clean air and clean water to a robust economy, and I look forward to working with her.”

Brown yesterday released a public statement that caught the attention of the whole nation, in which she said that Kitzhaber had called her back from a conference in Washington DC but then acted erratically when they met, denying he would quit but then discussing what would happen if he did.

“This is clearly a bizarre and unprecedented situation,” she said.

After Brown is sworn in as governor, she will choose her own replacement as Secretary of State. State law says only that she must choose someone from her own political party.

This is Kitzhaber’s statement in full:

Governor Kitzhaber released the following statement today.
I am announcing today that I will resign as Governor of the State of Oregon.
It is not in my nature to walk away from a job I have undertaken – it is to stand and fight for the cause.  For that reason I apologize to all those people who gave of their faith, time, energy and resources to elect me to a fourth term last year and who have supported me over the past three decades. I promise you that I will continue to pursue our shared goals and our common cause in another venue.
I must also say that it is deeply troubling to me to realize that we have come to a place in the history of this great state of ours where a person can be charged, tried, convicted and sentenced by the media with no due process and no independent verification of the allegations involved. But even more troubling – and on a very personal level as someone who has given 35 years of public service to Oregon – is that so many of my former allies in common cause have been willing to simply accept this judgment at its face value.
It is something that is hard for me to comprehend – something we might expect in Washington, D.C. but surely not in Oregon. I do not know what it means for our shared future but I do know that it is seriously undermining civic engagement in this state and the quality of the public discourse that once made Oregon stand out from the pack.
Nonetheless, I understand that I have become a liability to the very institutions and policies to which I have dedicated my career and, indeed, my entire adult life. As a former presiding officer I fully understand the reasons for which I have been asked to resign. I wish Speaker Kotek and President Courtney and their colleagues on both sides of the aisle success in this legislative session and beyond. And I hope that they are truly committed to carrying forward the spirit of bipartisanship and collaboration that has marked the last four years in Oregon.
In 1968 I was inspired to commit my life to public service by the last campaign of Robert Kennedy. Forty-one years ago I started work as an emergency room doctor in Roseburg with a goal to make life better for those in my care. Ever since then, I have sought to keep that focus by trying to make things better for the people and the communities of this state that I love. I have had the extraordinary privilege of pursuing that work as a State Representative, State Senator, Senate President and as your Governor.
Over those years, I have had the honor to be a part of some remarkable achievements.

n  We responded to the worst recession and financial crisis since the Great Depression by rebuilding an Oregon economy that has added jobs and vitality in many regions of our state.  And, unlike many other parts of our nation, we did it together with cooperation and respect for Oregon and for each other.

n  We have also found ways to support our rural communities and to create jobs in our natural resources industries while enhancing the environment.

n  When forces of intolerance sought to divide us we stood up for the principal that every Oregonian deserves respect and basic rights – including the right to choose and the right to marry the person we love.

n  And I am proud that Oregon has not invoked the death penalty during my last four years on the watch.

n  We have stood by our working men and women steadfastly supporting collective bargaining and the right to for  a union.

n  We have transformed our health care system, improving access and quality while lowering costs through our new Coordinated Care Organizations.  Tonight over 95 percent of Oregonians will go to bed knowing that they have health insurance coverage.  We did that together.

n  In a three-day special session we reformed our public pension system, provided tax relief to small businesses and raised new revenue for mental health and for public education  -- the foundation of our future.

n  We have passionately pursued the goal of equity and opportunity – especially for those Oregonians who have been left behind: communities of color, English language learners and those in poverty, those in the rural parts of our state, the very young and the very old.

n  We have laid the groundwork for eliminating the achievement gap and ensuring that over 90 percent of our children could be reading at level in 3rd grade within five years.

n  And we are poised to reach agreements that will resolve the century-old water crisis in the Klamath Basin and expand irrigated agriculture in the Umatilla.

As important as what we have accomplished – how we have accomplished it is perhaps even more important. We have had a great tradition of overcoming partisan differences in this state and doing what is right for Oregon. That tradition had faltered, but over the past four years we have rebuilt a functional political center, reaching across party lines to do difficult, important things by reducing polarization and building community to help right the ship and chart a better course for our future.
I ran for a fourth term as your governor to continue that progress. But the questions that have been raised about my administration – specifically allegations against me concerning the work done by my fiancé Cylvia Hayes and the contracts she obtained during my last term – and the escalating media frenzy that has stemmed from this – has clearly reached the point of no return.
I am confident that I have not broken any laws nor taken any actions that were dishonest or dishonorable in their intent or outcome. That is why I asked both the Ethics Commission and the Attorney General to take a full and comprehensive look at my actions – and I will continue to fully cooperate with those ongoing efforts.  I am equally confident that once they have been concluded Oregonians will see that I have never put anything before my love for and commitment to Oregon and faithfully fulfilling the responsibilities of the public offices I have held
But it is also clear that this process will take months.
I have always had the deepest respect for the remarkable institution that is the Oregon Legislature; and for the office of the Governor. And I cannot in good conscience continue to be the element that undermines it. I have always tried to do the right thing and now the right thing to do is to step aside.
One thing I hope people know about me is that I love this state and its people, its rivers, its mountains and its landscapes with every fiber of my being. It is because of that love that I tender my resignation as Governor, effective at 10 a.m. on February 18, 2015. Secretary of State Kate Brown will take the oath of office as Oregon’s Governor at that time. Oregon will be in good hands and I wish her well.
Thank you for allowing me to serve you and our state. It has been the honor of my life. And I believe I can say that looking back over those years we have left it better than we found it.