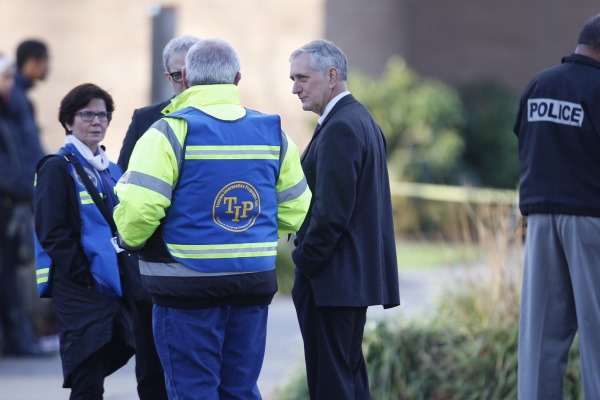 Portland’s rocky relationship with the federal counter-terrorism program the Joint Terrorism Task Force could be coming to a close on Thursday— or it could be expanding.

Two resolutions are to be considered by City Council Feb. 5 at 6 p.m.

If the Council votes to back out from the Joint Terrorism Task Force -- which pairs local law enforcement with the FBI and other federal agencies to share intelligence and data -- it would mark a historic two times they would have done so.

Dan Handelman of the police accountability group Portland Copwatch says that if there’s a “real” threat to public safety he has no problem with the bureau working with the FBI to prevent harm—his issue is with the lack of accountability presented by the Mayor not having security clearance to the program.

“The problem is our Mayor is the Police Commissioner, and it's his responsibility to be sure our officers are conducting themselves in a way that is consistent with the U.S. Constitution, Oregon law, and local policies,” Handelman told The Skanner News. “If he does not have the security clearance to oversee the daily work of these officers, we can't hold them accountable. So having more insight is not the same as having oversight. And no, it does not make us ‘safer.’”

Pre-dating the infamous attacks of Sept. 11, 2001, the nearly three decade old JTTF -- meant to combat domestic and international terrorism such as bombings and mass killings -- has undergone major national expansion in recent years. To date, 74 Joint Terrorism Task Forces have been created since the Twin Towers fell, quadrupling its members to almost 4,000.

While Portland joined the JTTF in 1997, allegations of underreported and mishandled data have come from both bureaucrats and concerned citizens – including former Mayor Vera Katz, who was frustrated  by being denied security clearance, even as Hales is now.

By 2005, City Council made its historic decision to become the first-ever city to withdraw from the Joint Terrorism Task Force, citing the need for better oversight of the city’s own police, according to an ACLU blog post from that year.

The decision comes at an interesting time, as Chief Larry O’Dea who was sworn into the position at the top of the year made promises for a more transparent and tolerant bureau. Fritz who has been on Council when they withdrew from the program and rejoined just announced she’ll be running for a third term as Commissioner, and some of the largest protests in recent history have filled all areas of the metro-area calling for an end to structural bias the lends itself to  state-sanctioned violence.

A vote against continuing the relationship would still give the Chief of Police security clearance privileges with the FBI when there is "specific knowledge of an immediate threat of harm from criminal activity here in Portland, or at another local jurisdiction which may need support from our emergency responders."

The second resolution calls for expansion of the program giving two of the 944 sworn Portland Police officers to be assigned full time to the Joint Terrorism Task Force. Right now the force only works with the program on a part-time basis – whereas most cities assign fulltime officers to the JTTF.

Reports to Mayor Hales on the specifics of the program would remain largely limited under both resolutions should the Council decide to continue involvement.

The ACLU this year wrote a public letter decrying the City’s participation in the program, which is in over 100 cities nationally saying, “The only way for the Portland Police Bureau to ensure that it is complying with Oregon laws and the Constitution is to stay out of the FBI's JTTF.”

The note goes on to say, “History has taught us again and again that the federal government, including the FBI, uses invasive and unconstitutional surveillance tactics in the name of ‘counter-terrorism’ and ‘national security.’”

The Center for Intercultural Organizing, an immigrant and refugee advocacy group, is also currently encouraging Portland residents to call City Council members to vote against continuing in the program.

“The program allows the Portland Police Bureau (PPB) to work with the FBI, and largely targets Arab, Middle Eastern, Muslim, and South Asian communities,” the organization said in an emailed action alert to its members.

“[The Joint Terrorism Task Force] has led to profiling and spying on our community members. There has been no transparency for the community to even know what activities PPB engages in. JTTF threatens the civil liberties and civil rights of many Portland residents.”