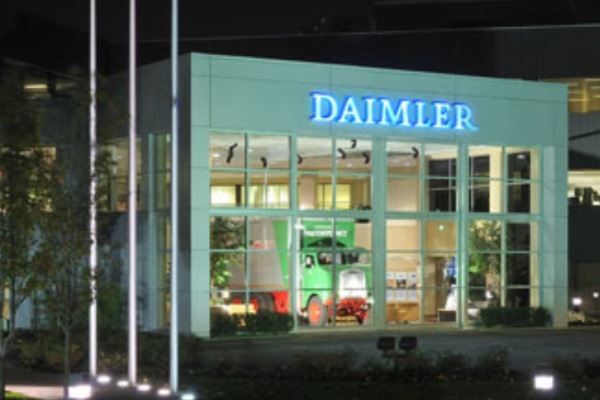 A heightened accountability system and a $2.4 million payout is the end result of a nearly three month investigation by the Bureau of Labor and Industries into racist, ethnophobic and xenophobic behavior by employees at Daimler Trucks of North America. Image via Google Maps

A historic $2.4 million settlement filed against trucking giant Daimler Trucks of North America marks the largest ever in the Bureau of Labor and Industries Civil Rights Division.

Six current and former employees of the North Portland trucking manufacturer will split the monies after filing civil rights complaints with the employment rights agency after sustaining racist, ethnophobic and xenophobic harassment on the job.

“It’s difficult for any worker to step forward in the face of a hostile work environment – and I’m pleased that our agency was able help the parties achieve a just and fair outcome,” Labor Commissioner Brad Avakian, who heads BOLI said.

After the workers stepped forward with their complaints, Avakian filed his own on behalf of the citizens of Oregon and launched an investigation on Daimler.

According to both BOLI and Daimler representatives the trucking company was fully compliant in the investigation which lasted nearly three months. The probe included interviews with more than 60 current and former Daimler employees, as well as supervisors, and reviewed hundreds of documents pertaining to the facility’s operations.

“Daimler Trucks North America is committed to diversity and inclusion including strict attention to the enforcement of human resource policies and guidelines that govern many aspects of our work lives, as well as compliance with federal and local employment laws and regulations,” said Brian Burton, general counsel of Daimler Trucks North America. “We are pleased that we were able to resolve the matter with the Oregon Bureau of Labor and Industries and the parties involved.”

The Skanner News’ coverage of the lawsuit from last year describes some of the antagonistic behavior the complainants reported:

Racial epithets including “nigger” and “boy;” displays of nooses by a co-worker to one of the complainants with the threat to drag him behind a truck; a swastika carved into a bathroom; and a Native American employee being shoved up against a truck, make up just some of the conditions alleged in the documents obtained by The Skanner News.

“Co-workers would write the word ‘nigger’ in places for me to clean up,” alleges Joseph Hall in his grievance. Hall retired from Daimler in 2013, due to a disability but believes race also played into it.

Patrick D. Johnson Sr., who remains employed with Daimler as a warehouse worker and material handler, alleges that because he is black he has been subjected to different terms of employment. “I am constantly forced to work the least desirable jobs in this position, including ones outdoors or the more difficult jobs,” Johnson alleges in his complaint filed last year.”

Over 20 BOLI complaints, dating back to 2002, have been filed against the employer—most were deferred to court or dismissed because of lack of evidence.

Five workers withdrew their BOLI complaints before the settlement but have stated their intention to go to civil court according to the employment rights agency.

The settlement includes a three-year compliance timeline “to ensure a harassment and discrimination-free workplace for current and future employees.” The agreement (which doesn’t yet have a start date) includes the creation of a civil rights complaint hotline for Daimler workers, logbooks for supervisors to record any future incidents, mandatory supervisor trainings conducted by either BOLI or a BOLI-approved entity and training for at least two designated managers to conduct internal investigations for any future incidents.

The agreement includes additional compliance measures such as:

The historic payout beats other high profile cases taken on by BOLI including a $450,000 private settlement by the State Department of Public Safety Standards and Training after director John Minnis was accused of sexual harassment; a $400,000 final order against P Club for discrimination against transgendered patrons; and a Bend, Oregon dentist who had to shell out $348,000 after threatening to fire a dental assistant unless she attended a Scientology-related training session in 2012.

After paying legal fees, Daimler complainants Harold Lathan, Terence Edwards, Ron Burley, Sean Tomkin, Leneld Hammond, and Kerry Barker will split the monies between each other. Commissioner Avakian’s $190,000 winnings from his filing on behalf of the citizens of Oregon is being set aside for a fund for future complaints.

If you feel you are being discriminated against at work, call Oregon Bureau of Labor and Industries at 971-673-0761, or the Equal Employment Opportunity Commission 202-663-4599.