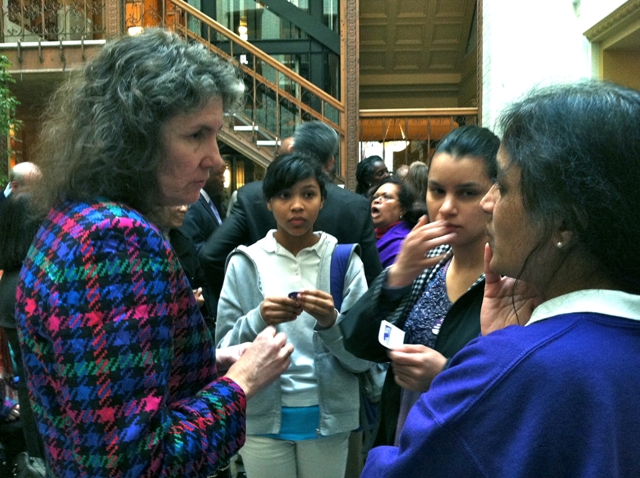 Portland City Commissioner Amanda Fritz, at left, chats with Jyothi Pulla, at right, and a group of students from the former Harriet Tubman STEM school, during a reception for the city's new Office of Equity and Diversity held in April, 2012. Fritz testified on the school's behalf before the Portland Public Schools board, as did State Sen. Chip Shields and Rep. Lew Frederick, but it was shut down anyway. Photo by Lisa Loving

Portland City Commissioner Amanda Fritz announced this week she is running for a third term in office.

The former community organizer and registered nurse is the only official in office who was first elected through a publicly-funded campaign; that system was shut down by voters in 2010 by a margin of less than one percent.

“I plan to keep doing what I said I would do when Portlanders elected me in 2008, and re-elected me in 2012—prioritizing basic services and spending taxpayers' money wisely,” she said Wednesday in a press statement. “I have been a consistent voice for fiscal responsibility, equity, community involvement, and common sense for the past six years.”

Fritz said that she plans to fund her next campaign in part with the life insurance payment from her husband’s tragic death in a car accident last year.

“It’s money I wish I didn’t have, and I would give it back in a heartbeat if I could spend just one more day with my husband,” she said. “But it’s there, and I know Steve would completely support me as he always did, in choosing to invest it to win re-election in 2016 so I can continue to serve the people of this city we both love.”

Fritz said Wednesday that although she has stated many times that her current term would be her last foray into electoral politics, the death of her husband, Oregon State Hospital psychiatrist Dr. Steven Fritz, changed her mind.

“Prior to Steve’s death in September, many Portlanders had asked me to reconsider and run again. My response was that I believed I would have earned a long and happy retirement with my husband, at the end of eight years in office.

“My life completely changed on September 24th when Steve was killed.

“And now, I have the choice to make something positive out of this horrible loss. I’ve been thinking about this over the past few months. My kids and I went away over the holidays, and I discussed it with them. I want to continue to serve Portland, with their full support and that of Steve’s parents who live in East Portland.”

While Fritz is widely admired by liberal grassroots communities, she has also been under fire from police accountability activists opposed to the City’s appeal of the U.S. Department of Justice agreement regarding final say in court-mandated reviews of the Portland Police Bureau’s compliance with its terms.

Fritz, along with Mayor Charlie Hales, insists that the City Council should have final say; members of the Albina Ministerial Alliance for Justice and Police Reform argue that in the interest of keeping the review process independent of city control, a district judge should have the final say.

The issue is currently before a mediator of the Ninth Circuit Court of Appeals.

The Fritz campaign posted a list of priorities for the rest of her current term and possible future one, including plans to:

●     Help the most vulnerable people in our community, including people experiencing mental illnesses and people living outside

Her campaign listed accomplishments of the past two years including:

●     Establishing the independent City Budget Office, which she proposed at the end of 2012

●     Securing ongoing funding to assist survivors of human trafficking, and to train women and youth on strategies preventing domestic and sexual violence

●     Passage of the $68M Parks Replacement Bond, with the highest-ever level of support for a Portland Parks funding measure

●     Coordinating the hiring of the Compliance Officer/Community Liaison and appointment of the Community Oversight Advisory Board for the Department of Justice Settlement Agreement on police accountability regarding treatment of people experiencing mental illnesses, in partnership with the Mayor’s office

●     Revising standards for notice to neighbors prior to demolition of single family homes, offering more opportunities for preservation of historic buildings.