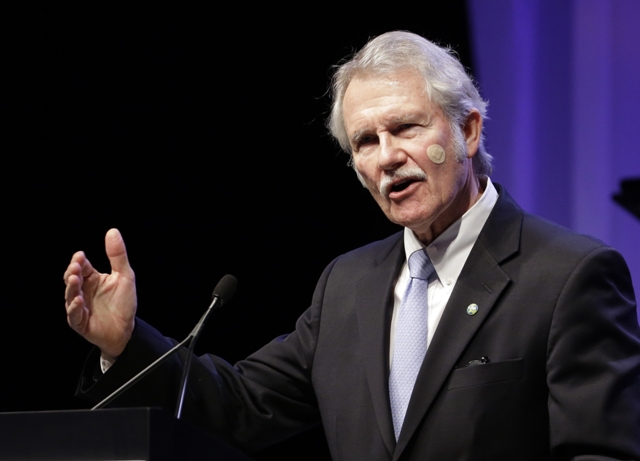 PORTLAND, Ore. (AP) — Oregon public high schools have to start picking up the pace if they are to achieve Gov. John Kitzhaber's demand for a 100 percent graduation rate by 2025.

The state said Thursday that the on-time graduation rate increased to 72 percent in 2014. It's a jump of 3.3 percentage points from a year ago, but that gain is largely because of a new calculation procedure.

In previous years, special education students awarded modified diplomas were not counted in the graduation rate. This year, they are. The new calculation also includes students who met the requirements for a diploma after four years, but chose to stay in high school for a fifth-year program offered by some districts.

Oregon education officials say other states include such students in their tallies, so this year's rate makes for a better comparison than in 2013, when the state's graduation rate ranked last in the nation. National rankings for 2014 aren't available yet, but an extra 3.3 percentage points last year would have pushed Oregon ahead of four states.

Still, 72 percent leaves Oregon a long way from the governor's "40-40-20" goal. The governor expects 40 percent of students to receive a bachelor's degree or higher, 40 percent to get an associate degree or certificate and the other 20 percent to at least get a high school diploma.

As for improving the dropout rate, Golden said the state can make dramatic strides if it continues its push to have kids reading proficiently by the third grade and finds a way to get all students to show up regularly.

"We need to have a laser focus on chronic absenteeism," she said.

Hispanic students in the Stanfield School District had a similarly strong performance. The state chalked it up to the Eastern Promise program, a partnership between Eastern Oregon high schools and Eastern Oregon University and local community colleges.

The state has nearly 200 school districts, most of them small. The districts representing the three largest cities — Portland, Eugene and Salem — had graduation rates near the state average.

Excluding districts with fewer than 20 students, the Eastern Oregon school districts of Imbler, Enterprise and Pilot Rock had the highest graduation rates, all topping 96 percent. The worst rates were in Crook County, Estacada and Elkton. All graduated between 20 percent and 30 percent the students who enrolled in 2010-11.