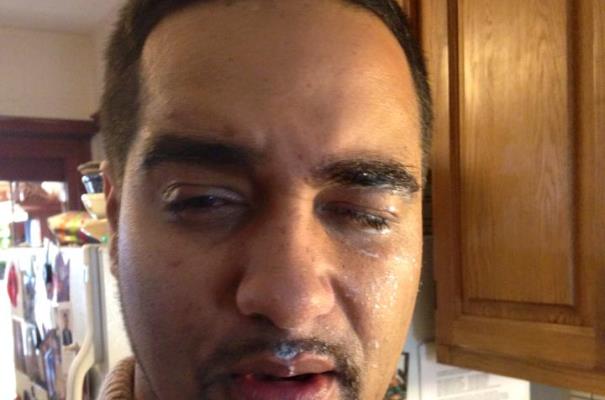 Jesse Hagopian, a teacher at Garfield High School in Seattle has been a fixture in various activist movements throughout the city. At a Martin Luther King Day rally that drew nearly 8,000 people, Hagopian says he was unfairly pepper sprayed by a Seattle Police Officer. The image here allegedly shows the aftermath of him pouring milk on his face to ease the pain, was posted to his Facebook and has been shared over 200 times on the social media site. Image via Facebook

One of the nation’s leading voices on school reform is suing the City of Seattle and the Seattle Police Department after being pepper sprayed in the face during the Martin Luther King Jr. march last week.

A history teacher and advisor to the Black Student Union at Garfield High School, Jesse Hagopian says he had just finished a speech about nonviolent civil disobedience and was walking on the sidewalk while talking on the phone with his mother when the unnamed officer sprayed him.

(Read The Skanner News interview with Hagopian on his new book, “More than a Score: The New Uprising Against High-Stakes Testing,” here. Hagopian also blogs at “I Am an Educator”)

Bible, former president of the Seattle NAACP, in a statement cited the U.S. Department of Justice ruling against the Seattle Police in bringing the suit.

“Recent police activities in Seattle serve as a reminder that there is a great deal of work that remains to be done in terms of police accountability,” Bible said.  “We will be forwarding information that we gather about this incident and others to the Department of Justice.”

Newspapers in Seattle reported about 8,000 participants at the Jan. 19 rallies. From the event’s main stage, Hagopian spoke out against injustice in the “racist system,” the national political blog The Daily Kos reported last week.

"We know that Martin Luther King would have been out in the streets with the protesters in Ferguson taking the rubber bullets," Hagopian told the crowd; social media posts show he also gave civic awards to young activists with the Black Lives Matter movement.

Following his speech Hagopian says he was heading to a birthday party for his two-year-old son. While on the phone with his mother—and on the sidewalk—he says he was hit with pepper spray by a Seattle Police officer.

“I was marching for Martin Luther King day today–amazing march! At one point after the big main march, group of bike cops set up a line to keep us from marching. Some people walked through the line, but I didn’t. When my phone rang, I turned away from the cops and began walking away to answer the phone. A cop then ran up in my face and pepper sprayed me right in the face. The milk has helped a lot and I’m beginning to feel better. Wish we had a better world.”

That post to date has been shared more than 200 times on the social media site.

“The main thing I’m upset about is that [I was on] the sidewalk when I was pepper sprayed so there’s really no reason at all they can use to justify what they did,” Hagopian told The Skanner News.

Bible’s law office released video of the incident that shows Hagopian walking past police on the sidewalk while a female officer on bicycle begins spraying passersby on the sidewalk as well as the street in a wide arc. Hagopian can be seen casually walking past, talking on the phone, then getting hit full in the face.

The Stranger newspaper in Seattle reported another pepper spraying incident that day in which video appears to show more contested action by officers on the scene.

“That's when one officer with a bike starts pepper-spraying, hitting several individuals standing in the street from a few feet away,” The Stranger’s story continues.

An extensive investigation by the US Department of Justice on the Seattle Police Department found that officers used excessive force nearly 20 percent of the time that they used for at all —that’s one out of every five.