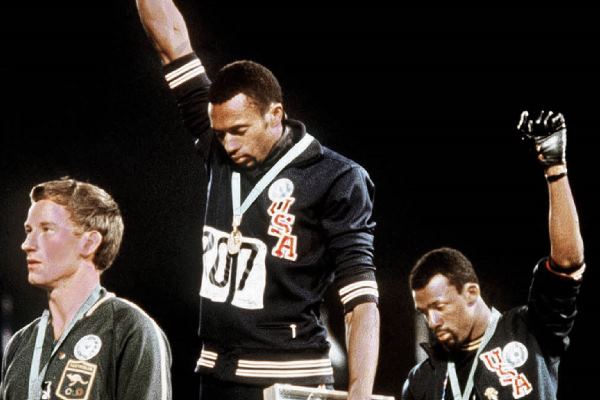 By The Skanner News

Olympic bronze medalist John Carlos, who famously raised his hand next to fellow African American and gold medalist Tommie Smith to form the “Black power” symbol at the 1968 games in Mexico, will be on a panel at Garfield High School discussing the connections of resistance movements past and present. The event will be held Thurs., Jan. 22, at 7 p.m. in the Quincy Jones Auditorium at Garfield High School, 400 23rd Avenue, Seattle.

The moment of protest against institutional racism in the athlete’s native United States of America was captured by the Associated Press and went on to become arguably the most iconic photo in sports history. Organizers of the event titled ‘From Black Power to Black Lives Matter’ say the message of that moment still ring true, especially in the wake of recent deaths of Black men that have come by the hand of law enforcement.

Cases like the police shooting death of 18-year-old Mike Brown Jr. that launched the small St. Louis, Mo. suburb of Ferguson into the national spotlight; and the caught-on-camera chokehold of Eric Garner in New York City have sparked conversations across the country.

Carlos will discuss these issues alongside fellow panelists, Aretha Basu and Marissa Jenae activists in the Black Lives Matter movement, Jesse Hagopian contributing author and editor of "More Than a Score: The New Uprising Against High-Stakes Testing educator at Garfield High School and advisor of the school’s Black Student Union who made national headlines when he led pupils in protest of current standardized testing requirements; Gerald Hankerson, president of the Seattle-King County NAACP, and Dave Zirin who co-authored Carlos’  autobiography with the Olympian titled  ‘The John Carlos Story: The Sports Movement That Changed The World’.

Students from Garfield High School’s Black Student Union, whose work has included staging a walkout following the non-indictment in Garner’s death, will host the event.

“John Carlos’ fist on that Olympic stand in 1968 sent a message to the entire world that Black people were done being second class citizens and weren’t just going to go represent the United States and propogate the image of a free society,” says Hagopian, one of the night’s panelists, “similarly today we’ve seen in cities across the nation that young people with their hands up are again revealing the injustice in the American justice system.”

Hagopian calls Carlos a “lifelong pursuer of social justice” and says the lessons the 69-year-old will share will help galvanize a “new civil rights movement” in Seattle.

Carlos will be on hand following the event to autograph copies of his autobiography ‘The John Carlos Story: The Sports Movement That Changed The World.’

For more information on the event, contact Jesse Hagopian by phone 206-962-1685 or email him at jesse@rethinkingschools.org.    A page for the event of Facebook includes more details on the event can be found here.