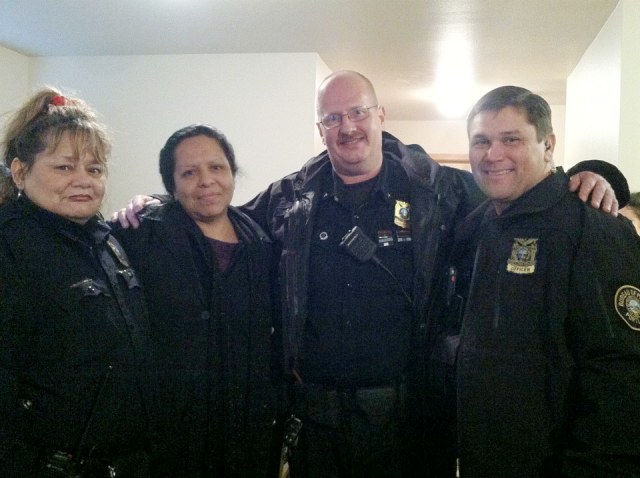 By Donovan Smith Special To The Skanner News
Published: 15 January 2015

With 28 years logged into the Portland Police bureau, newly appointed Chief Larry O’Dea may be fresh in his position but certainly knows his agency well. Starting first as an officer in the gang enforcement team in the 1980’s, the New York State native at 52-years-old has worked his way up the ranks to captain of the traffic division, and most recently assistant chief. He holds 11 medals of valor and received 75 letters of commendation.

The day before his swearing in ceremony Jan. 2, where he would take over as police chief, replacing Mike Reese, O’Dea visited The Skanner News’ offices in North Portland and talked community relations.

The Skanner News: Everybody’s all about community and police relations all over the country. What is your agenda for your first year in this position?

O’Dea: The first one is it’s critical to me that we focus on building trusting relationships in all parts of the community. Every day it keeps making more sense to me that if we focus on having all of our bureau from the top down, building relationships in all parts the community---not just most-- not just some--and working together on [their] priorities we can meet people’s needs so that we can police in a reflective way. The needs of the business community Downtown are very different than the needs of the folks out at Cully and Killingsworth, which are different from Albina and Killingsworth.

TSN: I know that Chris Uehara is going to be the new commander of North Precinct. Who else are you bringing in that you’re excited about?

Part of what I’m doing is restructuring, going from three branches to four branches in the Chief’s office. I’m doing that specifically so all of my Assistant Chiefs have the time and capacity to be engaged with the community. I look at all the advisory committees I’ve been a part of and different opportunities in the community and it matters when there’s an assistant chief at the table; it matters, and it’s important. All my assistant chiefs will have more capacity to do that; this is going to be top down. We’re going to be engaged in the community.

TSN: The majority of the City’s spending goes to Fire and Police. One of the things that spending goes to is police officers’ overtime pay, which is a lot of money. So it’s not just overtime, it’s over worked. Is there any plan in place to kind of pull back the amount of time officers have to work?

O’Dea: Part of last year’s budget process was a direction from Council from an outside group come in and look at our staffing level and look at how we are structured. The last cuts that we took the year before last, we lost 55 positions. So we’re down about 130 positions from where we had been in the past. So when you’re staffing short, to a certain level you have to work more overtime. This group is going to be coming up with a report here with some recommendations pretty [soon].

When that report comes out then we’ll present it to the Mayor and the Commissioners and kind of work through what’s the process to kind of ‘right size’ the police bureau. Part of that is because we know what’s going to stay in the final draft is them saying you’re too short and you need four instead of three [in the Chief’s office] so that’s a change I’ve already been able to make based off the information from the staffing report as well. As we go forward this year, having that conversation around staffing study about the right size of the bureau and the right structure will continue.

TSN: How often do those review boards ever find that officers act out of policy because all it ever looks like to us—from the outside looking in—the Independent Police Review board and all these other people never sustain complaints?

O’Dea: Oh no, not at all. Twice a year, there is a report this about all the Review Board cases and the names are redacted out but it tells you what happened in the cases, the recommendations and results.

Sometimes there is a minimum recommended and sometimes termination is recommended. Sometimes in those cases, you’ll see things are grieved by the police union and they’ll go further to a bargaining process. I think there’s sometimes a little bit of a perception that the union always fights everything, and I don’t see that necessarily as the case. I think that they have a role to defend their members. But one of the things I’ve noticed is whenever they feel that one of their members has not been truthful they never take those things forward. Truthfulness is the core of our job. So much of what we do, people can go to jail for what we say versus what they say. If you violate that truthfulness you can’t do your job and you don’t have credibility with your peers. Nobody wants to work with you if they can’t believe and trust you.

TSN: Are there any numbers around how much recruitment comes from your local municipalities trying to get into the Portland bureau?

O’Dea: California’s police academy has been considered the equivalent of our academy. So somebody can go through that academy and we can hire them right in, they don’t have to go and do another 16 weeks because the quality and the type of training is on-par and we would do our own Portland-specific training. So it offered to us a little bit of success to our way diverse recruiting. The downside though is now with the economy going better and better that opportunity isn’t going to be there. So we’ve got find our new strategy because we’ve still got to continue our diverse recruiting

[Our] best chance at having someone stay here, be here, be connected, and have the support are the folks who live here and grow up here. So we’re looking at what are our best strategies for recruiting right here in the metro-area so we’re not pulling people away from their families and support systems, they’re here and connected to the community already.

TSN: You said it’s a critical time to become police chief. In the wake of Ferguson, Eric Garner, and so many others connecting back home what do those national cases, mean to you?

O’Dea: They send me a very powerful message. What I see out of these incidents, are segments of the community don’t have a trusting relationship with their police department. So it is critical to build that trust.

Voting rights will be the theme of The Skanner News' 29th Annual Martin Luther King Jr. Breakfast this year being held on Jan. 19, 2015 this year. Follow the hashtags:#KingBreakfast2015 and #SK40Years on Twitter, Facebook and Instagram for the latest on the event and The Skanner happenings in celebration of our 40th year in operation.