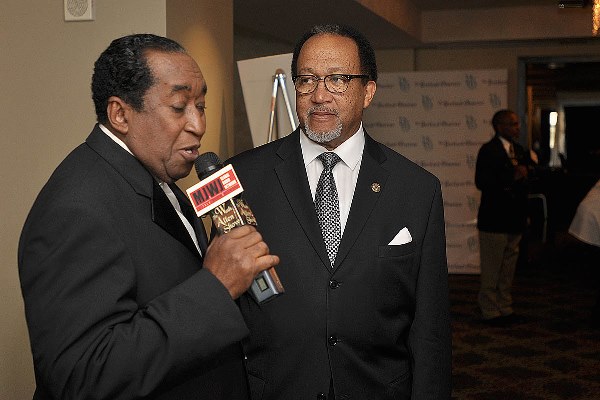 Keynote speaker is the Rev. Benjamin Chavis, executive director of the National Newspaper Publishers Association and a former assistant to the Rev. Martin Luther King, Jr. At the age of 24, Chavis became one of the Wilmington 10, a group of teenagers and civil rights activists wrongly convicted of firebombing a grocery store in the city in 1971.

Chavis, who got his start working as an organizer for King in the 1960s, says the leader’s Jan. 19, 2015 day of celebration will mark the start of an important year for equality in America. At The Skanner News breakfast, Chavis who is serving his first year as NNPA president, says he will be reasserting King’s legacy.

“I’m going to be reasserting the legacy of Dr. King,” he says. “He was not only for Black Americans but all Americans. There appear to be some strong winds that want to go backwards not forward.”

Chavis stresses that King’s vision was, at its heart, about all people.

“Dr. King’s dream was an inclusive dream for the whole of humanity, and one of the fundamental problems that challenge America today is the lack of affirmation of the importance of inclusion. I think we made a lot of progress during the Civil Rights movements in the 60s under Dr., King’s leadership, because he failed to succumb to the politics of division…”

Rev. Chavis has spent decades in the realm of civil rights, and is also a global business leader and educator. In the 1970’s he was jailed with nine others as a “political prisoner” after boycotting the unfair closure of a predominately black high school in his native North Carolina.

In 1980 the convictions were overturned after members of the group had been imprisoned for nearly 10 years. More than three decades later, North Carolina Gov. Beverley Perdue in 2012 granted a “pardon of innocence” on the group, including state-paid financial settlements for surviving members.

Chavis received his Bachelor of Arts in chemistry from University of North Carolina, Master of Divinity from Duke University; and the Doctor of Ministry, from historically black institution Howard University.

Chavis, a pastor in the United Church of Christ, has served as vice president of the National Council of Churches in 1988; he was also was elected the youngest executive director of the national NAACP in 1993. Chavis’ long list of distinctions also include co-founding the Hip-Hop Summit Action Network, the world’s largest coalition of hip-hop artists and recording industry executives.

“I think Portland is a trendsetting city. If there’s any city that should be representative of that progress, it should be here,” Chavis says of the Rose City.

Canned goods and boxed meals will be collected for the Martha Terrell Food Pantry, which is located on Northeast 8th Avenue and is available to any resident of that area. For the first time, we will also be collecting donations of newly purchased clothing, especially coats.