Street Fee Proposal Set For Another Tentative Vote in January 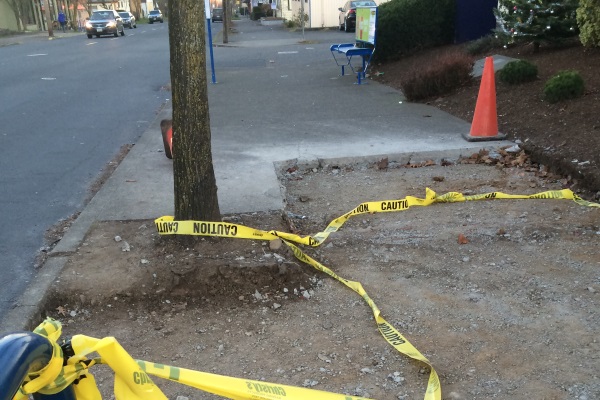 A new amendment by Commissioner Steve Novick to the controversial street fee proposal would have Portlanders paying a gas usage tax to help pay for safety and maintenance projects.  Photo by Donovan M. Smith

The proposal to fix up Portland streets, roads and sidewalks like this  has received yet another tweak. Commissioner Steve Novick, overseer of The Portland Bureau of Transportation, recently announced an amendment that would tax people, not based off the amount of money they make, but the amount of gas they use.

Calculated to generate $43.8 million for safety and maintenance projects across the city, this controversial plan has seen a number of stops and starts as City Council has attempted to balance the proposal in a way that appeases business and home owners, and the tax brackets of families and individuals alike.

With a two-fold system to generate money: residential and non-residential, Novick says “gasoline use is one proxy for ‘road use,” and that gas usage by low income people is typically lower than more wealthy counterparts with many poorer people not owning a car or relying on public transportation.

“I’ve always said that I prefer progressive income tax. I also want to get something in place quickly so we can start getting work done because every month that we wait the streets deteriorate further,” Novick told The Skanner News in a sit down interview.

Dana Haynes, spokesperson for the mayor, says Charlie Hales is happy with this proposal because it gives a break to low income people while addressing consumption.

“Of all the options that’ve come up in the last year, the Mayor thinks this one is workable,” says Haynes.

In the first year, the city explicitly promises the street fee would pay for projects in North, Northeast, Southwest, and outer East Portland.

Naming 122nd Avenue specifically, Novick tells The Skanner News that safety improvements in underserved areas of town could also come with increased bus service from TriMet, according to conversations he’s had with the transit company’s general manager, Neil McFarlane.

“That’s kind of one of the first things on our list that we would do, is make those improvements, that would make it safer for people to get to 122nd and TriMet says that if we can do that, they’ll upgrade the service,” says Novick.

In order for it to pass, three City Council members must vote in favor of the proposal. Commissioner Amanda Fritz has long been considered the swing vote on this issue though it has never undergone an official decision.

Fritz stated in a press release Jan. 6 that she is opposed to this version of the proposal because it does not exempt low income people and because the gas usage taxation simply "doesn't make any sense" to her.

“I can’t support something that’s going to make it more difficult for somebody who’s living on the street to get back into an apartment for example,” Fritz told The Skanner. Because there is a cap on how much upper income people would pay, she says an extra financial burden would be placed on folks in the median tax bracket as well.

"This estimated gas usage based on income doesn't make any sense to me. If it's based on income, then it's not based on gas use," says the Commissioner. "It's too easy for folks to say, 'Well I'm upper income but I don't own a car,' so then what?"

City Council was last set to vote on the matter Dec. 17, but decided to defer the matter to the first public meeting of the new year on Jan. 8, 2015.

Here are some key things to know about the proposal going into the possible final vote on January:

Should the proposal fail amongst council members, Novick says he will propose yet again a progressive income tax measure for the ballot on May or November 2016.

The first-term commissioner says may be passed with the resolution, should it get the necessary votes, for the revenue bureau to analyze whether taxing suburbanites who work in the city but live outside the city limits is legal in addition to being practical.

As far as whether the proposal will go through in its current form on Jan. 17, “I don’t know,” says Novick.

If you want to voice your opinion on the latest version of the proposal, a public hearing is scheduled at City Hall (1221 SW 4th Avenue)for Jan. 8 at 6 p.m.

For more information on the street fee visit: https://www.portlandoregon.gov/transportation/64188

Questions about the plan can also be directed to the city by email at: ourstreetspdx@portlandoregon.gov