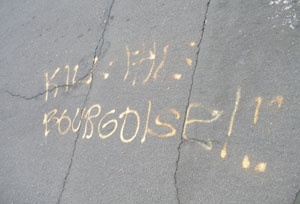 On the morning of Sunday, June 24, residents in one Northeast neighborhood awoke to find graffiti marking their streets, sidewalks and vehicles. Vandals hit several cars on Northeast Seventh Avenue and Holman Street with the words "Consume" in gold spray paint, and other areas of the street on that same block featured similar graffiti that appeared to be political in nature. The words "Bourgoise (sic) F**kers," a swastika and several similar tags littered the streets. While the tags don't appear to be racially motivated, two neighbors say every vehicle hit was Black-owned.
"It appeared to be all Black houses that were hit," said Michael Donaldson, whose 1990 Cadillac was spray-painted.
Portland Police Spokesman Sgt. Brian Schmautz says investigators have no reason to believe that the perpetrators knew their victims were Black. Schmautz says vandals have a variety of motivations for their crimes, including racism, but many times when officers arrest a suspect, the messages they paint are designed to inflame, but not necessarily match the individual's political beliefs.
"We have problems with graffiti all over the city," he said.
Another neighbor, Linda Kanzinger, said she wasn't targeted, but thinks the vandalism was a hate crime. She says she saw a tag that said, "Nigs Beware" but this reporter was unable to locate the tag.
"I'm very upset. I'm still very upset," said Kanzinger, who said the incident uncovered unpleasant memories of when she lived near Aryan Nations members while being married to a Jewish man.
"I don't know if people are afraid of that individual," she said. "It's more of an emotional crime."
The political statements indicated a disdain for gas-guzzling vehicles, but other White-owned vehicles of similar value and fuel consumption were not hit. It is unclear how many other Black-owned vehicles were also not tagged. Most of the graffiti on the street did not appear to target specific houses, but lashed out at what could be perceived as gentrification.
As for Donaldson, he's hoping the gold paint will come off without too much trouble. He also hopes it doesn't happen again.
"I just hope it was an isolated incident," he said.