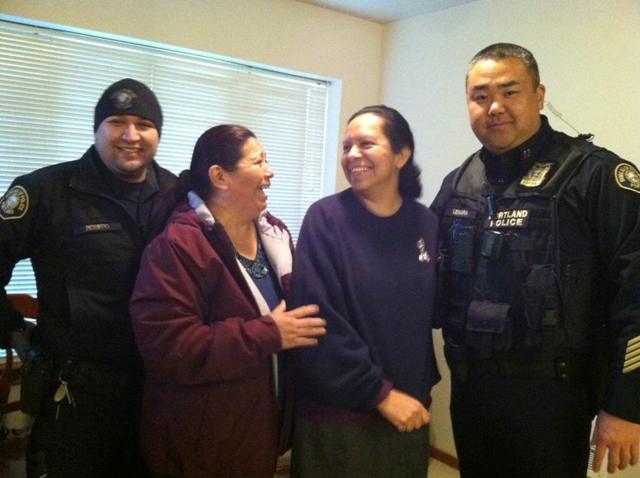 Portland Police Youth Services Division Captain Chris Uehara, at right, celebrates with an apartment full of moms from Villa de Mariposas as well as more than a dozen police officers and many kids. Uehara starts as North Precinct Commander on Jan. 2, 2015.  See our entire album of photos from the event on The Skanner News Facebook page. Lisa Loving photo

The officers had heard of a destitute family and wrapped around them with food and clothing; now the mom, Henriquetta, was throwing a holiday party for the police who’d pitched in their own time and money to help.

On his hands and knees, with a screwdriver and a flashlight, O’Dea and an assistant worked to reattach the legs to the table as the mom of the house – who spoke only Spanish – presided over cauldrons of steaming tamales and a gaggle of giggling elementary schoolers in the Villa de Mariposas apartments.

Sheldon, a native of Hawaii, was recruited to the Portland Police a few years ago, and now he spends his days connecting to Benson students and trying to meet their needs – sometimes family-by-family.

“A staff member brought a student to my attention who needed assistance because she didn't have a lot of money,” Sheldon explained.

The officers signed the student up for the Portland Police Sunshine Division’s Shop with a Cop program, where kids can pick out clothing, shoes and other items from Fred Meyers – for the past 12 years the department store and the Portland Police Bureau have partnered to serve hundreds of local families this way each year.

“Then I found out that she had a little sister also so we brought her into it too,” Sheldon says. “And then we figured out that their mom needed help with food, so we brought them up a Sunshine food box.”

But when Sheldon brought the food box to the apartment, Henriquetta warned him not to put it on the dining room table, which was broken.

That's when Sheldon remembered that O’Dea volunteers with Habitat for Humanity, and that he probably had the skills and equipment to repair the table.

“So I emailed the chief and he agreed to come out today,” Sheldon says. “And the mom said – we want to throw you a party for all you’ve done to support us.”

So, to make a long story short, Chief O'Dea found himself on his hands and knees with the screwdriver wrestling with the dining room table as tamales simmered on the stove – now cared for by another Portland Police officer -- in the tiny apartment.

But the repair was a ruse; in fact, the police officers had pooled their money to purchase a new dining set as a surprise.

A dozen elementary school aged children giggled as they dragged the chairs up the stairway into the apartment; when Henriquetta re-entered her home and saw the new dining set, she cried. So did Officer Rico, Chief O’Dea and many others.

Downstairs even more kids ran around the community room waiting for the tamales to finish cooking, tearing open candy canes they’d been given by a smiling cop in a Santa hat.