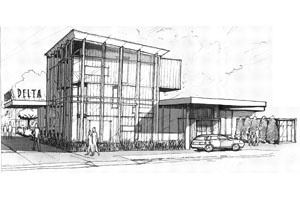 A potential design of the renovated June Key Delta House. Sorority members say the final design will likely only have one story.

Portlanders are known for their environmental passions, but a group of local women are taking recycling to a whole new level.
"It's beyond LEEDS," says Alisa Kane of the Delta Sigma Theta sorority's plans to convert their meeting hall into an environmentally friendly, "green" building.
Kane, who works in the city of Portland's Green Building program, reviewed the Delta's grant application, which garnered the sorority $117,000, and said the Delta's meeting hall plans are innovative and sustainable.
"This project sets the bar so high," Kane says.
When it's done, Kane hopes the building will serve as an example of how buildings can be sustainable, affordable and help diminish the footprint humans leave on this planet.
The $500,000 project will convert an old gas station at 5940 N. Albina St. into a model of sustainability.
The Deltas plan to use discarded international shipping crates – huge metal containers that transport goods on cargo ships – to build their new meeting hall.
The sorority's architectural advisor, Bob Belcher, likens the containers to huge building blocks.
The 8-foot-wide, 9-foot-tall, 20-foot-long containers work like hollow Lego blocks. They can be stacked, custom cut or set side-by-side.
"The metal skin can be cut away into doors and windows and interior finished with sheetrock," Belcher says. "The trick is in how you use them."
But recycling the containers is just the beginning. The Deltas plan to use recycled glass, cabinetry and other used building materials; as well as efficient lighting, low-flow fixtures; ultra-insulated walls; a bioswale for storm water; storm water     management and a rain water harvesting system. They've even made plans to build a community garden on site.
"We are fulfilling the dream June Key had," said sorority member Leslie Unthank of the late Delta June Key, a teacher who helped acquire the property.
The new meeting house, which will be known as the June Key Delta House, will allow the sorority to host more people, expand community services and let other organizations know how beneficial it is to "build green," says Unthank.
The project has already won quite a few nods from local organizations and public agencies. The Deltas won a competitive Green Investment Fund grant from Portland's Office of Sustainable Development and members of the Delta Sigma Theta Portland Alumnae Chapter, a service sorority of college-educated Black women, have pledged nearly $100,000 of their own money.
The rest of the money will come from grants, fund-raising activities and private donations. The national sorority was founded in 1913 at Howard University. In Oregon, the Deltas currently have chapters at Portland State, Oregon State universities and the University of Oregon.
The project will use a maximum amount of recycled and donated material. Belcher says they saved 50,000-square-feet of insulated windows from the landfill after Benson Glass discovered the panes weren't tempered. The Rebuilding Center at 3625 N. Mississippi Ave., also will donate construction materials for the project. In all, the Deltas expect that 90 percent of the construction materials used on the meeting hall will be recycled.
The current site's asphalt also will be recycled and replaced. What is not turned into bioswales, which help absorb roof and parking area run-off, will be covered with a layer of permeable paving that will naturally filter storm water instead of diverting it directly into the sewer system.
Storm water that hits the roof will be diverted into a filter system to be used for the building's toilets and other non-potable water needs such as irrigation. There is also the possibility that a portion of the roof will be converted into an "ecoroof," helping to offset the greenspace that's destroyed when a structure or parking lot is built.
The Deltas are working with Sienna Architects, a firm that has experience with green building techniques.
The meeting house will serve as a sort of pilot project for the city. Portland's Green Investment grants are given out on an annual basis to projects that show innovation and experimentation in green building practices.
Other projects that received money from the Green Investment fund include the Kenton Living Building, which will generate its own electricity, send no wastewater into the sewer and use rainwater for plumbing fixtures; the Central Library Ecoroof Project, which will turn the downtown library's rooftop into a demonstration of how a living roof can work; the da Vinci classroom, which will be the first LEED platinum, net-zero energy, freestanding classroom in the nation; a home in inner Northeast made with super insulated Structural Insulated Panels; and a converted ranch-style home with a living wall, passive solar panels and recycled cabinetry and countertops.
The Deltas plan to begin construction next spring. The sorority will hold a garage sale on July 7 at the site to help raise money for the renovations.