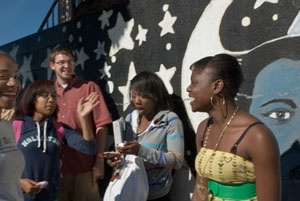 The words "summer school" don't usually invoke images of barbecues, classic hip-hop tunes and videography classes.
But that's exactly what's happening at Oregon Outreach's "welcome to summer school" celebration.
On this warm Monday afternoon, DJ Universal Sect is spinning classic Rob Bass while Northwest Natural volunteers grill burgers and plump up sides of lettuce, tomatoes, onions and potato salad.
Jeff DeGreef, the summer school teacher, is telling a story about seeing a blues legend in Arizona during a concert punctuated by great guitar playing — DeGreef demonstrates on his air guitar — and a massive thunderstorm.
"Oh man, it was awesome," DeGreef shouts to his coworker, Valante Coxwell, practically screaming to be heard above the music. "I'd never seen anything like that in Iowa!"
Behind DeGreef, teenaged girls have gathered in a circle to giggle at their teacher and roll their eyes at his animated storytelling. In teen-speak, it's a sure sign that they like DeGreef enough to poke fun at his eccentricities.
"He's so great with the kids," Oregon Outreach Director Becky Black says of DeGreef. "He's just really passionate about what he does."
A young, White man who grew up in the middle of Iowa, DeGreef isn't the most likely teacher of urban youth – most of whom are African American and have been all but abandoned by the mainstream school system.
But somehow, using a blend of enthusiasm, empathy and ingenuity, DeGreef makes it work.
"You have to have so much empathy for these students," DeGreef says. "If we as adults could even begin to see their struggles. I mean, they've got all of these bad choices out there that they can make, and when you're struggling it's easy to make a bad choice. ... We have to realize that these are our leaders. They are   intelligent kids, but, academically, they're getting lost in the shuffle."
The Oregon Outreach program is there to help.
The summer school program takes in students who are in academic trouble – all of them need to catch up on credits to graduate or move ahead in their home high schools – and blends academics, drug and alcohol counseling, job training, and anti-violence counseling.
"It's a comprehensive program," Black says. "We have so many great community partners. House of Umoja is here to counsel the boys and the girls. Lifeworks Northwest comes to do (drug and alcohol) counseling. And Larry Dunham, a retired teacher, is here to do video production classes."
In the mornings, students get academic help and beef up their computer skills. In the afternoons, it's on to job preparation classes and on-site job placement for the older students. Black creates homemade dishes for lunch and Dunham's students are videotaping the entire summer program for a documentary. All of the work students do in this summer school earns credit for regular high school.
"It's a great chance for them to catch up on credits," Black says.
If students partake in all aspects of the summer school and show up everyday, they could earn as much credit as they would in half a year at a regular high school. They even get stipends for attending — $5 a day, paid on Mondays, so they'll come back after Friday – and the program, unlike most summer schools, is free for parents.
The program started the week after Portland Public Schools got out for summer break, and will see the students back to school in the fall, through the month of September.
So far, says Black, the pilot program has been successful.
"We've had 100 percent attendance so far," Black says. "And we want it to stay that way."

Oregon Outreach's summer school, known officially as the "Summer Education, Employment Development Program," is modeled after Black's McCoy Academy, which takes in teens who have been expelled from regular high schools.
Over the past eight years, the McCoy Academy has had dozens of success stories. It is, in the words of Portland Mayor Tom Potter, "a program that works."
And that's exactly the type of program that Potter had in mind when he created a pool of grant money to be doled out by his new Office of Youth Violence Prevention.
"When I created this office in 2006, gang outreach workers were working 12 hours or more every day and were struggling to keep their programs going," Potter says.
Headed by longtime anti-gang activist John Canda, the mayor's Office of Youth Violence Prevention, wasn't trying to reinvent the wheel. Instead, Canda and his staff reached out to community organizations that had already proven effective in the fight against youth violence – organizations like Oregon Outreach.
On Tuesday, June 26, Potter announced that his new office would fund seven community programs that provide alternatives to gangs for at-risk youth.
Black's summer program received $25,000. The grant pays for the summer school, which reaches 25 mainly Black youth from Jefferson, Madison and Roosevelt high schools.
The Latino Network, which provides educational and recreational activities for youth younger than 21 in North and Northeast Portland, also received a short-term, three-month grant for its summertime program.
Five programs received grants for the entire year.
Brother's and Sister's Keepers, which works with youth already involved in gangs, was awarded $62,000 to serve 100 youth through next June.
Tonya Dickens, executive director of Brother's and Sister's Keepers, says she's "ecstatic" that the city believed in programs like hers enough to fund them through the next year.
"This is a great start," Dickens says. "This grant is our entire budget. Before this, we didn't have a budget. So I'm excited that they believed in us."

Asked about the recent media reports of increasing gang violence at the New Columbia housing development, Dickens says the violence is not a new phenomenon.
"The gangs just take it to a different level," Dickens says. "They've never actually gone away."
Dickens' program brings youth ages 9to 25 who are involved with gangs into a safe environment, where they can receive counseling on peer pressure, drug and alcohol abuse, how to get ahead in school and find employment, teen parenting and other life challenges.
"This is about young people making bad choices," Dickens says. "When they have responsible adults in their lives – whether those adults are family or from school or the church or the community – it does make a difference."
Back at the Oregon Outreach summer school, DeGreef echoes Dickens' thoughts.
"Some of the kids I work with have been given up on," he says. "They've been kicked out of other schools and they come here with so many challenges. We need to understand that some of these students are going through some really tough issues at home, with their friends, at school. And we need to help them take small steps forward."
Last year, DeGreef had a student at the McCoy Academy who had slipped so far through the public education cracks that he had missed his entire freshman year of high school.
"He missed the whole year!" DeGreef says. "And there was some issue of whether he had actually passed the eighth grade, so we had to get that straightened out ... but now he's here and he's doing really well."
Portland Police estimate that there are about 2,000 youth involved in gangs in the city of Portland. It's a daunting problem, but one that organizations like Brother's and Sister's Keepers and Oregon Outreach are committed to solving.
"All it takes is compassion," DeGreef says. "That and consistency. We have to just keep coming at them the same way. They're intelligent kids ... and they want a better future."