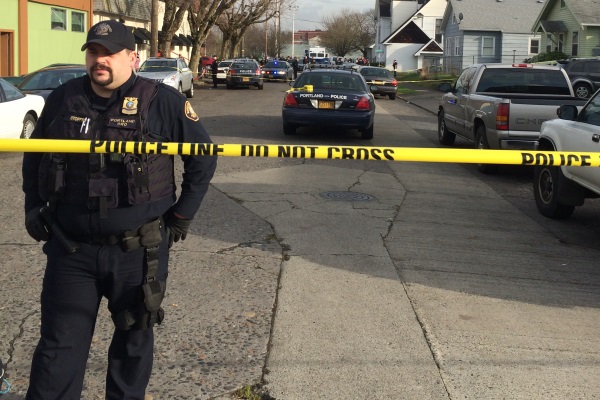 Following a shooting that left four wounded at Rosemary Anderson High School/Portland Opportunities Industrialization Center Friday afternoon, police from the metro area were joined by the FBI and ATF as they searched for three suspects said to have fled the area immediately after. Two “persons of interest” have since been detained, while two of the four victims continue their recovery at Legacy Emanuel Hospital. Photo by Donovan M. Smith

Early Saturday morning police detained 22-year-old Lonzo Murphy in a traffic stop less than a mile from where the shooting had taken place. During the stop a handgun was found in the car.

Later that same day, 18-year-old Marquel Dugas was arrested on a probation violation. Both Dugas and Murphy, police say, are “persons of interest” in connection with the shooting.

Then on Tuesday night, police say 16-year-old Marquise D'Angelo Murphy was arrested in Keizer, after a car chase. Murphy is Llonzo Murphy’s brother. The teenager was arrested in April of this year for hitting a bicyclist in the head with a brick; police said at the time he would be charged with a Measure 11 crime in the incident.

“All three suspects have been lodged on probation violation warrants as detectives continue to investigate the shooting. Formal charges related to the shooting are expected within the next few days,” police said in a statement.

Both Dugas and Murphy were apprehended by members of Portland's gang enforcement team but officials have given mixed signals about labeling the incident as a gang shooting.

This week, however, the bureau says it was gang-related.

"Based on the investigation thus far, the shooting appears to be gang-related and it has been assigned to Gang Enforcement Team detectives," the bureau said in a statement.

“We’re looking at the possibility that the shooter may be gang affiliated, that may not have anything to do with the shooting. The students may not at all be related to gangs, we don’t want to leave that conclusion at all with anybody,” Simpson told reporters one of two press conferences he would hold the day of the shooting.

The victims, all said by police to be “affiliated” with the school include: Taylor Michelle Zimmers, 16; David Joshua Jackson-Liday, 20; La’Braye Franklin, 17; and Olyvia Lynn Baston, 17 who was grazed by a bullet and treated by EMTs at the scene.

The other three more seriously wounded were rushed by ambulance to Legacy Emanuel Hospital for treatment.

Though Zimmers and Jackson-Liday remained in the hospital on Monday in fair and good condition, Franklin was released on Saturday.

The Skanner News team was the first on the scene after more than a dozen police cruisers sped past our offices on North Killingsworth Street on Friday.

Within the hour, The Skanner News witnessed members from the Multnomah County Sherriff’s office, Fairview, ATF, FBI at the scene alongside Portland Police.

The victims were shot right on the spot where local muralist Antwoine Thomas had worked with youth from the group Striving to Reduce Youth Violence Everywhere to paint a ‘peace mural’ on the street last summer.

Thomas says in doing the mural, he was able to meet with various young people in the community. The fact that an act of violence occured on this peace, he says, should not take away from its intended message.

“I believe that [the message] still stands, that’s life. Bumps in the road happen,” says Thomas. “I don’t think it should take away the focus that youth in our community need that help, and that they are striving for that help.”

Franklin, a student at POIC, interned at the office of Mayor Charlie Hales as one of the hundreds of youth in the SummerWorks program headed by Commissioner Loretta Smith.

Hales, who is also police commissioner, visited the site of the shooting before later visiting with the young people wounded at the hospital.

Joe McFerrin II, director of the POIC, was honored by The Skanner News and the Portland Royal Rosarians in 2013 as “Newsmaker of the Year” for his work in helping young people graduate from high school and find jobs, and also for expanding the program into East Portland.

McFerrin says he was on his way to a meeting when he got word of the shooting from his staff.

“My heart just sank,” McFerrin told a small group of reporters on Friday. McFerrin also cautioned against jumping to conclusions. “This is not a North Portland issue, or just a Black issue, or a ghetto-type issue,” he warned, “this is an issue that schools face all around the country with respect to violence.”

In response to the shooting, which made national headlines, organizers from the anti-violence group Don’t Shoot Portland staged a march through inner Northeast Portland, using the site of the shooting as the starting point.

Classes and programming are believed to have continued as scheduled on Monday.

Those looking to support the , Rosemary Anderson High School/Portland Opportunities Industrialization Center can donate to an online fund by clicking here.