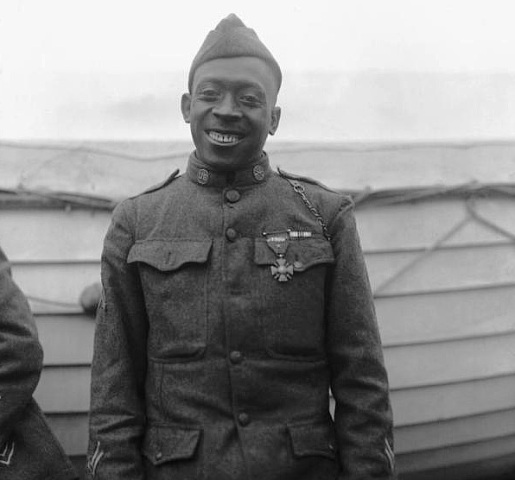 Sgt. Henry Johnson was just 21 years old when he won the Croix de Guerre -- France's highest military honor -- for saving his friend's life during World War 1; he died just 10 years later. alone in a US military hospital in Illinois.

Almost 100 years after his death, a World War I hero is finally on track to get the Medal of Honor – which would make him only the second Black man in U.S. history to receive it.

The U.S. Senate on Friday at last agreed to nominate Johnson for the medal. Sending it to President Barack Obama’s desk where all observers expect a quick signature.

Sgt. Henry Lincoln Johnson was a member of the Harlem Hellfighters (now known as the Rattlers) 369the Regiment who in 1918 saved his comrade, Private Needham Roberts – under attack by 20 German soldiers -- with nothing but a bolo knife and a rifle.

Johnson was shot many times but survived; he died in 1929 in a veterans hospital, estranged from his wife, jobless and without any military recognition from his own country except for his burial in Arlington National Cemetery.

Although Johnson was a New Yorker, The Skanner News has taken a special interest in this case. Former multimedia editor Helen Silvis won the NNPA’s Carl Murphy Community Service Award in 2011 after publishing several articles about Johnson’s bravery and the struggle to win Medal of Honor recognition for Black soldiers.

Oregon Sen. Ron Wyden, working with Portland City Commissioner Nick Fish – a native of New York whose grandfather was a captain of the Harlem Hellfighters during the war – and legislators from New York including Sen. Chuck Schumer, pushed the award through a difficult Congress.

“First of all, a big congratulations to Sen. Schumer and Sen. Wyden for spearheading this effort. And to The Skanner News for its award-winning series of articles about Henry Johnson,” Fish said late Friday.

“And now, 95 years later, we’re one step closer to achieving justice for one of the great heroes of World War I.”

In the early hours of May 14 1918, Sgt. Henry Lincoln Johnson was on guard duty in France, when some 20 enemy troops attacked his post. The railroad porter turned soldier from Albany, New York (but originally from North Carolina), displayed outstanding bravery: using his rifle and bolo knife to single-handedly repel the enemy troops. Despite sustaining grenade and shotgun injuries, he rescued his fellow guard Needham Roberts, and saved the lives of the other members of his troop. He was shot three times and sustained 11 stab wounds, but he drove off his attackers.