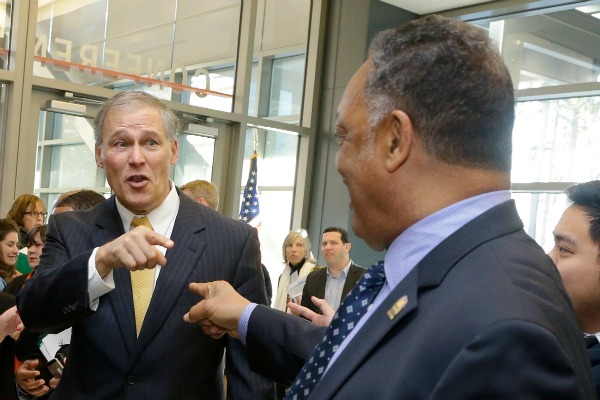 Washington Gov. Jay Inslee, left, talks with Rev. Jesse Jackson after they both spoke Tuesday, Dec. 2, 2014, at the Washington STEM (science, technology, engineering, and math education) Summit on the Microsoft campus in Redmond, Wash. Jackson was in the Seattle area this week to urge high tech companies to train and hire more minorities and to increase the diversity of their board members. (AP Photo/Ted S. Warren)

Reverend Jesse Jackson embarked on a whirlwind tour of the Seattle area to push for equality and greater diversity in technology.

He spoke to a crowd of 700 students at the Technology Access Foundation Academy in Kent about the importance of education as a pathway to end racial disparities in high-paying technology careers. He applauded the students for studying science, technology, engineering and math (STEM).

“Our mind is like a pearl, we can learn anything in the world,” Jackson told the audience.

The TAF academy, which focuses on preparing students for science and technology careers was started by executive director, Trish Millines Dziko, who left the technology sector because of a lack of racial and ethnic diversity.

The next day Jackson was joined by Washington State Governor Jay Inslee at the Washington STEM third Annual STEM Summit at Microsoft's Redmond campus. Jackson spoke about need for gender and minority equality in STEM education and jobs.

The report shows that only 40 percent of high school students graduate with competency in STEM, and only 9 out of 100 children born in Washington will end up being employed in a STEM-related field.

According to the analysis, a $650 million annual investment in STEM education could turn these numbers around and create a 30 percent increase in women and underrepresented minorities in STEM jobs.

In between media events, Jackson was interviewed by GeekWire at the Seattle campus of Northeastern University where he shared his thoughts about the importance of diversity and inclusion.

Jackson’s visit focused on education, long-range planning for STEM diversity and the push to have large tech companies divulge their diversity demographics for both their workforce and boards of directors.

Jackson has requested the gender and racial makeup of their workforce and Microsoft, Apple, Google, Facebook, Twitter, and Amazon have released this data.

“There is no shortage of Blacks and Latinos who can serve on boards, who can serve in c-suites, who certainly can serve in employment,” Jackson said in his interview with GeekWire. “There’s nothing that you need that Black or brown people cannot provide, if equipped to do the position. Nothing.”

The interview occurred across the street from the offices of Amazon.com. Jackson had extended an offer to visit the executives with a message of inclusion, but they chose not to meet with him.

The next day, Jackson spoke at the Microsoft Shareholders meeting in Bellevue, representing both a Microsoft shareholder and on behalf of the Rainbow PUSH Coalition. He referred to the diversity data of technology firms and said it wasn’t representative.

“The leadership and workforce of the technology industry does not look like America or reflect the population and consumers that it relies upon for success,” Jackson said, citing the paltry 0-3 percent employment of Blacks in the tech workforce. The numbers for African Americans in management were even worse with only 3 Black members out of 189 boards of director members.

At the end of his tour, Jackson made an appeal to the shareholders to look at the data he had collected, to commit to include diverse voices and sow the seeds of opportunity for those who have been left out of STEM. He spoke to the growth of the industry and untapped potential of new ideas.

And lastly, he expressed a plea to work through difficult problems in unity.

“The tech industry has demonstrated that it can solve the most challenging complex problems in the world. Inclusion is a complex problem – if we put our collective minds to it, we can solve it, too. There’s nothing we can’t do, together.”