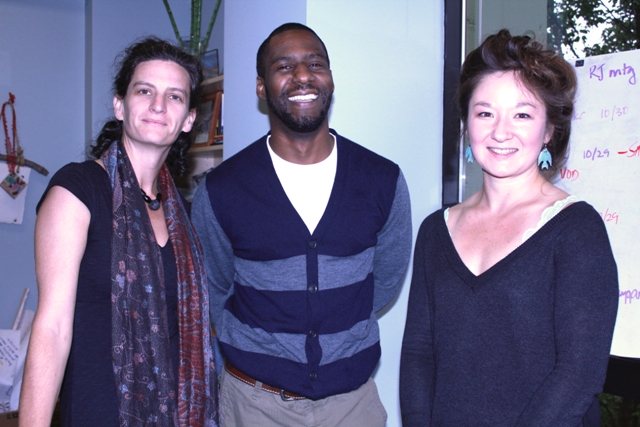 By Helen Silvis Of The Skanner News
Published: 26 November 2014

From left, Cristina Albo, Emanuel Price, and Amanda Park, of Resolutions Northwest. The organization is working on teaching youth new approaches to conflict resolution – but first they had to resolve a conflict with the school district. Helen Silvis photo

A law that was designed to keep students safe is having the opposite effect on some students—especially youth of color.

What’s more, Oregon school districts have extended the law to apply to volunteers. That means if you were convicted of selling drugs within 1000 feet of a school or sexting a picture of your girlfriend when you were a teenager, you can forget about volunteering in your daughter’s classroom or going on a field trip with your grandson.

Sheila Warren, president of Portland Parent union says the law is a barrier to many parents and grandparents. Adults who themselves were pushed out of school only to land in the criminal justice system, are now being pushed out of support roles.

“It’s ironic,” Warren says “Men and women who are now pillars in our community and shining examples of a restorative life are not allowed to leave their past behind. And because of racial profiling and discrimination in the justice system, African American families are being hurt most of all.”

The long list of Forever Crimes includes offenses such as: bigamy, public indecency, prostitution and patronizing a prostitute, as well as attempts to commit those crimes. Yet while many violent crimes are on that list, other offenses, such as domestic violence, manslaughter and many assaults are not.

Nationally and locally, schools have been found to suspend and expel Black students at rates above those for White students for minor infractions. And research has found that being suspended even once in 9th grade doubles the chance a student will drop out.

Experts say that having more adults of color in schools is one way to help increase the graduation rate for students of color.  Yet most Oregon schools don’t have a diverse teaching staff, even as students of color are becoming the majority in many districts.

Schools are crying out for adult volunteers and mentors of color at the same time as the Forever Crimes law is keeping Black workers and family members out of classrooms.  Some parents won’t even attempt to volunteer because they are afraid of failing the background check – even if their old offenses are not on the list.

John Payne, security manager with Portland Public Schools was a police officer for 19 years and then worked in the District Attorney’s office for 7 years.

During the 2013-2014 school year, Payne says, the school district performed more than 10,000 background checks on volunteers and 3,500 on staff and contractors.

Of those who went through the checks, 38 potential staff members and 104 volunteers failed the checks.

PPS checks are more stringent than the law requires. But if a person has been convicted of a felony crime such as domestic abuse or drug possession, Payne can use discretion.

“If I get a good report from the school principal and the crime is old there is no problem,” he says. “But if the principal tells me that person is coming into school smelling of marijuana, I am more likely to recommend against using them.”

With Forever Crimes, Payne has no discretion however. And he believes that inability to look at people on a case by case basis is unfair.

“I’ve seen how people can get into crime,” Payne says. “Say you have a 17-year-old who is being abused by her stepfather. So she gets sick of that and leaves home. Then maybe she meets someone who introduces her to prostitution, or maybe she starts prostituting herself to survive.  She turns 18 and gets a prostitution conviction. But she eventually gets her life going in the right direction.  Fast forward 20 years and she is a grandmother who wants to volunteer in her grandchildren’s classroom.

“The way policy is now, I am required to refuse her. My belief is we should have some discretion.”

Several sources in Portland Public Schools, who did not want to be quoted because the district had not authorized them to comment, agreed that the “Forever Crimes” law is a barrier for many parents.

Parents with any kind of felony record often won’t apply to volunteer because they fear being rejected.

Lakeitha Eliott, parent of a Jefferson High School student and former PTA president, says many parents are afraid that even a minor mistake such as a theft, will disqualify them.

“People are afraid their student will be humiliated,” Eliott said. “I wonder what the kid whose parent cannot go on a field trip with them because of an old conviction feels like and how a parent explains that to their kid.”

Does Restorative Justice Hold the Solution?

All three men have a track record of supporting youth and helping keep them on track to graduate. But because one of those men had a long-ago conviction for attempted Robbery 1, Portland Public Schools questioned whether he could work in schools at all.

That man was Emanuel Price, who has a 10-year track record of working to make our community a better place. When Price was 19 –more than 15 years ago— he was hanging out with old friends and got caught up in a robbery scheme he has regretted ever since. Convicted of Attempted Robbery 1, he served more than four years in jail. His mistake derailed his education and branded him as a felon.

Since then, Price has worked hard to restore his reputation and become a responsible worker and father.  Today he is a Portland Human Rights Commissioner, a past recipient of the Portland Peace Prize, and founder of the nonprofit Second Chances are for Everyone that helps former inmates become productive stable citizens.

Price has mentored gang-involved youth at the House of Umoja and researched policy for the Center for Intercultural Organizing.  Then last year Price worked as a SUN schools activities coordinator in the David Douglas School District, through a district contract with the nonprofit Metropolitan Family services.  People who know his work say he is an ideal mentor and example for students.

“I met him when he was facilitating the break dance class and we got interested in forming a Black Student Union,” says Etema Banks, African American Student Liaison at David Douglas High School.  “Emanuel offered to help me and he was really great. He was able to connect with students on a personal level – not just the Black Students, but also Russian students and other students of color.”

Cristina Albo, Price’s supervisor at Resolutions Northwest says he is the ideal person for that job, not in spite of his record, but because of it.

“Emanuel is a living example of restorative justice in action,” she said.  “While I think that it’s really important to have background checks so that kids are safe, I think that those disqualifying crimes go way beyond that,” she says.

After exploring the legal issues and the way Price’s work is structured and supervised, PPS decided he could keep his job. But most people with similar histories don’t have backing from an organization like Resolutions Northwest.

The only way to remove the barrier would be to change the law.

“The law needs to change,” Albo said. “But until we can do that I’m glad we were at least able to have Emanuel back in school.”

Find out more about restorative justice at the Resolutions Northwest website, www.resolutionsnorthwest.org.