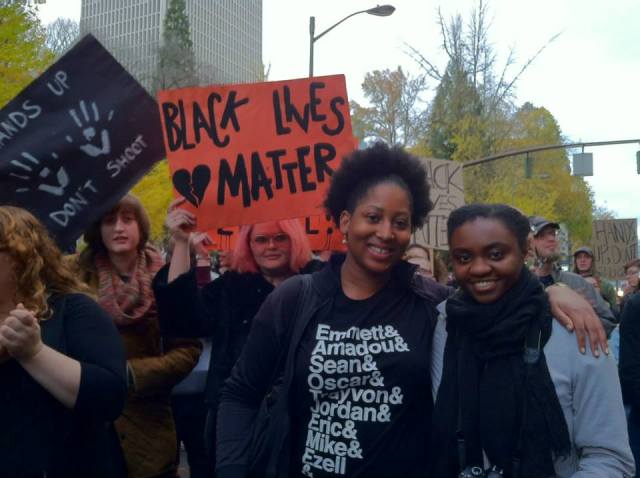 Joining protests across the nation estimates report nearly 1,000 gathered in Downtown Portland Nov. 25 in response to a controversial grand jury decision in Ferguson, Mo., not to indict officer Darren Wilson in the shooting death of teenager Michael Brown. Photo by Donovan M. Smith

Demonstrators shut down streets in downtown Portland and along Martin Luther King Boulevard last night in protest of a grand jury’s decision not to indict Ferguson, Mo., police officer Darren Wilson in the shooting death of teenager Michael Brown.

Two events were planned Tuesday night, first an emergency rally by Albina Ministerial Alliance Coalition for Justice and Police Reform, followed by a march through downtown Portland. A splinter group later attempted to march onto Interstate 5.

The first event organized by Albina Ministerial Alliance Coalition drew a crowd of more than 1,000, mixed by race, gender, and age.

Speakers at the demonstration, one of the largest civil rights gatherings in recent Portland history, included representatives from the Urban League of Portland, NAACP, All-African People’s Revolutionary Party, and even the Black Student Union at Jefferson High School.

The overarching theme was a need for systemic shift from “white supremacy” in the judicial system. “The arc of the moral universe is long, but it bends towards justice,” Dr. Leroy Haynes Jr. of the Albina Ministerial Alliance said to the crowd, quoting legendary civil rights leader Martin Luther King Jr at the steps of the Justice Center downtown. This quote would be repeated several times through the night as night began to fall.

Following the presentations, protestors slowly marched through downtown streets with picket signs and banners, repeating various chants for police reform including one that has emerged since Brown’s death on Aug. 9: “Hand’s Up, Don’t Shoot!”

Portland Police described the protest as “peaceful,” maintaining a light presence as the crowd made their way back to the Justice Center.

As the nearly 3-hour demonstration came to a close, Haynes honored the Brown family’s request that protestors nationwide take four-and-a-half minutes of silence, in remembrance of the four-and-half hours the unarmed teen’s body was left in the street after being killed.

As Haynes attempted to wrap up the rally, a small handful of White agitators urged the crowd from dispersing calling for “revolution.”

For nearly 15-minutes older African American civil rights leaders attempted to calm the White agitators. Eventually the group splintered off, and 7 were arrested.

Around 7 p.m., another large group of protestors gathered around the Burnside Bridge and SE Martin Luther King Boulevard blocking traffic at the busy intersection.

According to the Oregon Department of Transportation, protestors walked directly onto I-5 and I-84, interrupting traffic further.

Demonstrations continue across the nation speaking out against the grand jury’s decision which was aired during primetime on Monday.

Here in Portland the organization Don’t Shoot PDX is planning another demonstration at the Justice Center (located at SW 3rd and Morrison Street) for Wed., Nov. 26 at 3 p.m. to demand that President Obama and US Attorney General Eric Holder bring federal charges for civil rights violations of Mike Brown among others. More information on this event can be found on the group’s Facebook page.