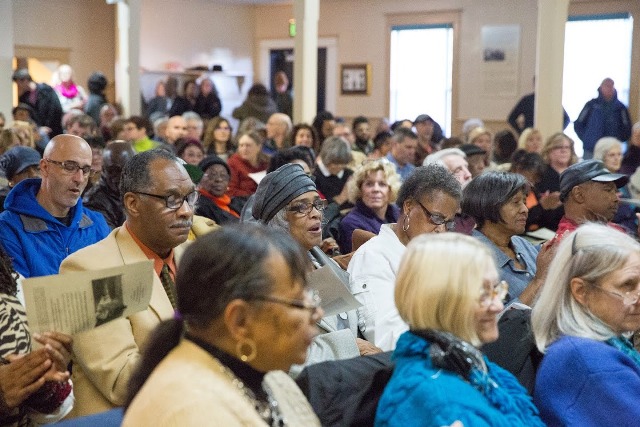 Of The Skanner News
Published: 20 November 2014

More than 200 people attended 'The Wake of Vanport,' including many flood survivors whose stories were recounted in the documentary. Photo by Intisar Abioto

NPMTC’s collection of Vanport oral history multimedia productions screened on Saturday, Nov. 15 to a packed hall at the Vancouver Avenue First Baptist Church in North Portland. It was the premiere of works produced during the year through NPMTC workshops and interviews that paired survivors from the 1948 disaster with artist producers.

NPMTC administrator Naomi Pierce said the project has been ongoing since 2011 and has gained momentum thanks to the outpouring of community support, many volunteer hours, multiple partnerships including the University of Oregon School of Journalism and funding from The Meyer Memorial Trust, Oregon Community Foundation, the Multnomah County Cultural Coalition and The Skanner Newsgroup.

This year Laura LoForti, story midwife, directed the project, bringing together multiple people and using her skills and creativity to help capture the voices of Vanport survivors.

Saturday night, nine short documentary-type productions were shown to a crowd of over 200. Renee Mitchell performed her poem about Vanport, and Ed Washington, Vanport survivor, led the post discussion.

Additional screenings will be scheduled and will be announced as they are finalized.

NPMTC plans to continue the Vanport Multimedia Project into 2015. If are a Vanport survivor that would like to be interviewed, please contact NPMTC at 503-285-5555 x 521 or email npmtc@theskanner.com