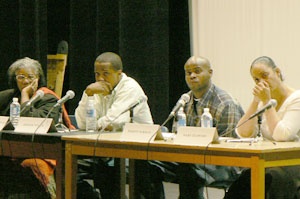 Black-on-Black crime is a problem that "touches the very heart of the Black community, locally and nationally," says King County Council Chairman Larry Gossett.
"Justice Department statistics show that one-third of the Black men born this year can expect to spend some time behind bars and that the Black male homicide rate is seven times the White male rate," Gossett told a crowd of about 200 people at a Juneteenth community forum held Tuesday, June 19 at Rainier Beach High School. "I'm not going to surrender a whole generation of our community to the jail or grave."
The forum, titled "Black-on-Black Crime: What are we going to do?" drew hundreds of African American community leaders, activists, neighbors and concerned citizens.
Speakers, including Gossett; Harriet Walden from Mothers for Police Accountability; Martin Norman; Jerome Welch; and community activist Mary Flowers focused on grassroots solutions to combat the rise of Black-on-Black crime throughout Seattle.
Welch, a Los Angeles native, stressed how chaotic California is and said we have a chance to make positive steps here in our community to stop the violence before it gets out of control.
"There are lives on the line here, we have to get our community back, be an example, for the sake of our children, our future," Welch said.
The latest FBI statistics show that, in nearly 64 percent of the more than 500,000 crimes reported nationally, both the victim and offender were Black.
In Washington State prisons, there are 4,027 individuals incarcerated and 51 percent of them are Black. Nationally, one in three Black men ages 20 to 29 are under correctional supervision. For every three Black men in college, four are in prison.
Flowers has spent seven years working with the Monroe Penitentiary Black Prisoners' Caucus. She says prisoners often tell her, "Please stop folks from coming up in here, it's like the roach motel, you come in you can't get out. Tell the young brothers not to come here."
Flowers called on and challenged the churches to step up.
"We can stop this, if we can get up and shout every Sunday," Flowers said. "We've gotta demonstrate our faith and get out there and save our children's lives."
Larry Evans, legislative aide to Council Chairman Gossett, apologized for "failing the young Black man," and said the forum is merely a baby step to ending Black-on-Black crime.
"Attending this forum isn't a solution," Evans said. "(It's) just a beginning to let our young people know we love and care about them but we can't have this kind of chaos in our community anymore."
The next meeting on Black-on-Black crime will be held at 5:30 p.m. Wednesday, June 27 at CAMP, 722 18th Ave.