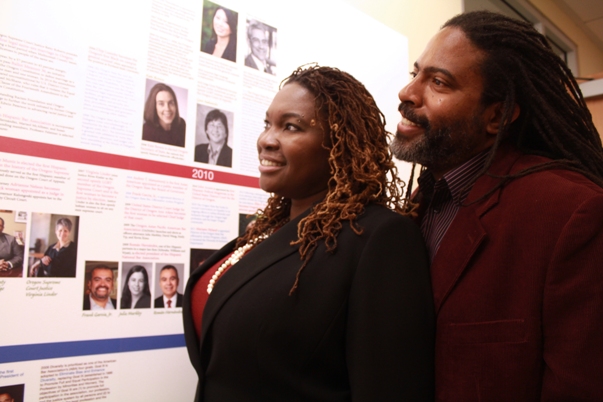 The Oregon State Bar celebrated its strides in diversity with the unveiling of a new exhibit detailing the history of the state’s progress towards inclusion and equity in a timeline. Photo by Helen Silvis

The unveiling this month of a new exhibit detailing the history of the Oregon State Bar shows that the association -- over a century old -- is more diverse than it ever has been.

The art installation details a brief timeline of America’s inception, the founding of Oregon as the 33rd state, and early “pioneers” of diversity in the state’s judicial system. It was unveiled in a ceremony of nearly 80 at the OSB headquarters in Tigard.

Director of the bar’s diversity and inclusion department, Mariann Hyland, says when she began practicing law in 1991 it was not uncommon for her to be in a room with “hundreds of white lawyers” and be the only person of color.   Though Hyland says there remains progress to be made in judicial equality, the art represents transparency in the legal system’s history and its exclusionary past.

“When we ask ourselves why are there so few lawyers of color -- and others who are outside the traditional group in practice -- we will have a reason why, and it’s because there were so many barriers in our way.”

According to the OSB’s monthly statistics for October, most lawyers in the state remain white and male with over 7,600 identifying in those categories. Asians followed a distant second with 374 practicing members, then Hispanics at 217, and blacks at 103. It should be noted of the 15,192 surveyed for the month’s data, over 6,500 did not identify their race.

Marva Fabien recalls when the number of black lawyers in the state of Oregon totaled three, just decades ago. After receiving her doctorate from Lewis and Clark Law School in the early 1980’s, she became one of the first to take advantage of the OSB’s Affirmative Action Program, which began in 1974. Though she says she experienced racism through her years in law, a toughness instilled by her native Trinidad -- and a passion for justice -- is what inspired her to press on.

Fabien’s story is honored in the new exhibit; she says she hopes her chronicle will serve as inspiration to others to consider law as a profession.

“[I’m happy] to be honored on the wall, which I hope survives at least my lifetime so that other people can see that, [they] can do it,” Fabien said. 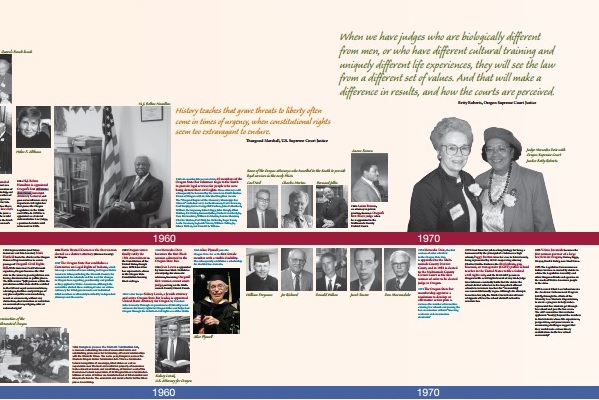 A section of the diversity wall that shows the timeline of progess in the Oregon judicial system. See the full wall on The Skanner News Flickr page.

OSB president Tom Kranovich is hoping so too. Though he says the art piece represents progress the bar has made in the ways the legal system operates, he’s optimistic it will become a trend.

Though the number of minority lawyers in Oregon had been steady growing since the 1970’s, recent  data from the bar’s diversity and inclusion department shows a plateau since the early 2000’s.

Among ethnic groups in the state bar and others nationally, the low representation of black lawyers remains the most problematic, especially considering their overrepresentation in the prison system, says Kranovich.

“It’s no secret that the incarceration rate in this country is seemingly disproportionate. I understand that the percentage of students getting kicked out of high school classes and stuff like that is significantly higher. I don’t know that having more Black lawyers would help—it wouldn’t hurt—because maybe then people would be more inclined to go and hire a lawyer, and I think that’s the key thing about having diversity in the law,” he said.

For Oregon, he says the problem lies not only in getting more Black students into law school, but keeping them here in the state to practice once they graduate.

Recognizing the OSB today remains majority white and male, Kranovich, still in his first year as president, says the exhibit nonetheless represents progress. “Diversity is a reality. We are no longer a singular type of society. We have people of all races, ethnicities, religions—that exists and it’s not gonna go away,” he says.

“The question is equality among diversity, and I think that’s the next step. Where I see progress in that, is that we’ve gotten away from the position of simply honoring diversity and moved on to talking about honoring diversity and inclusion. Because without inclusion, all we’re doing is separating people into different categories. If we’re truly going to be a just and equitable society, then everybody has to be included and that’s the next step.”

Over time the bar’s goal is add more history into the exhibit, and include more milestones.  To share stories of diversity and inclusion contact the OSB at [email protected]