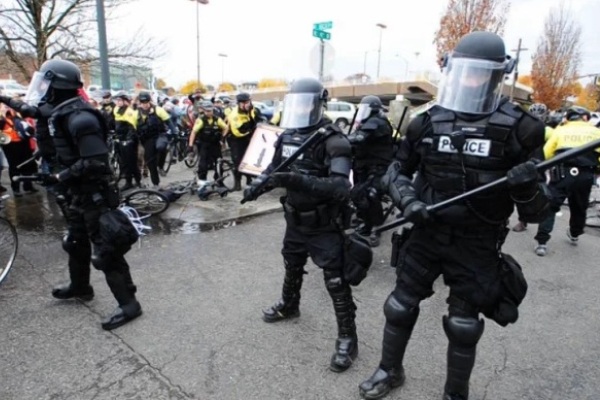 A first-of-its-kind report on Oregon’s law enforcement use of force shows 101 incidents – including 92 shootings, 43 ending in death – statewide between 2010 and 2014.

There have also been 6 Taser-related deaths, 2 deaths in custody and one example of a police vehicle used as a weapon in a deadly force incident.

But perhaps the most remarkable fact about it is that many people – including former elected officials and state leaders – thought that the Oregon Department of Justice was compiling the information and would periodically report on it, as set out by SB 111 – passed in 2007 and implemented in 2008.

They’re not. And while SB 111 mandated local law enforcement jurisdictions send their data on use of force incidents to the Department of Justice, all the data has been instead forwarded to the Oregon Department of Human Resources and combined into the state’s overall Oregon Violent Death Reporting System – defeating the purpose of creating an information set allowing public scrutiny on trends in police use of force against citizens.

No state agency has ever pulled the data out and reported on it because after the seemingly game-changing task of passing the law, the legislature failed to fund it – and the whole effort fell between the cracks.

The Skanner News has compiled a map tracking each use-of-force incident based on Copwatch’s research. Click inside the box below to see where incidents have been reported.

“It's easy to forget about these things, but for our group which was very concerned about use of force by police, it was a pretty significant thing to say – ‘here is something happening all over the state and everyone's going to figure out how to deal with it,’” said Dan Handelman of Portland Copwatch.

“There's not as much outcry in other cities when somebody is shot by the police, but that does not mean that every shooting that happens is completely justified, or that everyone in a community where it happens thinks it was the right thing to do.”

On Oct. 17, Copwatch compiled the data and sent it to Oregon Attorney General Ellen Rosenblum; Rosenblum’s staff says they are reviewing the statistics and also reviewing what they should be doing with them, as per SB 111.

Contacted by The Skanner News two weeks ago regarding the status of SB 111, Kristina Edmunson, Oregon Department of Justice spokesperson, spent days trying to track down what happened with the 2008 law, sending updates on her progress before finally turning up the bottom line.

The task proved difficult because almost every official and lawmaker involved in passing it is retired or out of office; each one contacted by The Skanner News thought it had gone into effect.

“ORS 181.789(6) provides that law enforcement agencies are to collect and report certain information to the Oregon Department of Justice (DOJ) when the use of deadly force results in a death. However, the DOJ grant for this program has not been legislatively funded since the 2007 -2009 biennium,” Edmunson told The Skanner News this week.

“We appreciate this inquiry and we are reviewing our procedures for making sure that all the required information is accurately reported to the Oregon Department of Justice,” Edmundson says.

While some policy experts see street violence as being a community health issue, the fact is that the intent of SB 111 was – everyone agrees – about tracking police use of force; it remains a mystery how the Department of Human Resources ended up with the data since no part of the law even mentions that bureau.

Not only was the bill an unfunded mandate, but it remains unclear who, over the years, should have alerted anyone else when the effort went flat.

When James Chasse was killed during a police stop in 2006, an unusual partnership of lawmakers, law enforcement, and state officials got together to pass a state law to make sure that wouldn't happen again.

“It was part of the whole package of reforms that Sen. Avel Gordly tried to get through, and Hardy Myers, who was the Attorney General at the time, helped usher through what was left of it,” Handelman says.

Now-retired Multnomah County District Attorney Michael Schrunk was also part of that team – and many observers at the time were heartened by the overall sense of cooperation among grassroots communities and government officials.

“When Schrunk was still District Attorney, I would say he was a partner and ally in our efforts to get some of the legislative changes,” Gordly told the Skanner News.

“Schrunk was really great to work with during those last few years,” Gordly said. “He took a different stand from the DAs association, which was opposed.”

As for how a small nonprofit group has stepped in when government bureaus failed to track the statewide use of force data, Gordly says she’s not surprised, and it’s a good thing they did.

“It’s a real blessing to have Dan Handelman’s leadership on these issues,” Gordly said. “Copwatch has been so consistent and persistent over time – and they raise these issues in a principled way.”

For more information on Portland Copwatch/Peace and Justice Works, go to www.portlandcopwatch.org.