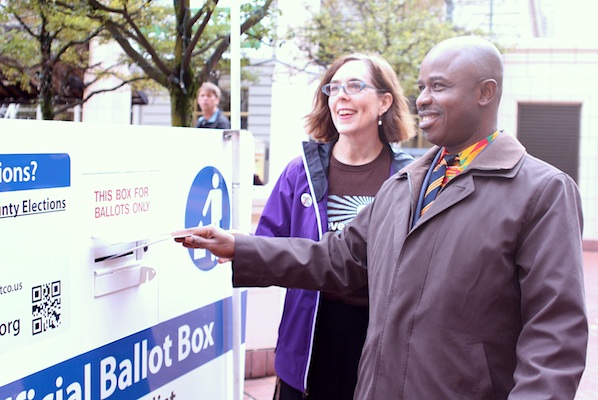 Oregon Secretary of State Kate Brown watches as Koffi Dessou votes for the first time in the United States. A training manager with the City of Portland, Dessou is originally from Togo. Brown visited Portland's Pioneer Square to thank voters in person. PHOTO: Arashi Young

Oregon voters legalized marijuana in Tuesday’s election and defied the national trend by giving Democrats a larger majority in the state legislature.  But not all the votes pleased left of center activists.  Voters also rejected drivers licenses for undocumented immigrants and failed to pass a measure  that would have helped students pay for higher education.

Democrats will have at least a 17 – 12 advantage in the Oregon State Senate going forward. In the Oregon House Democrats won 35 seats to the Republicans 25.

The new balance of power means Sen. Betsy Johnson’s vote will matter less. The Columbia County Democrat frequently voted with Republicans. Now Senate Democrats will be able to pass legislation without her.

The race for US Senator was called for Sen. Merkley early on. He took 55 percent of the vote to challenger Monica Wehby’s 38 percent. 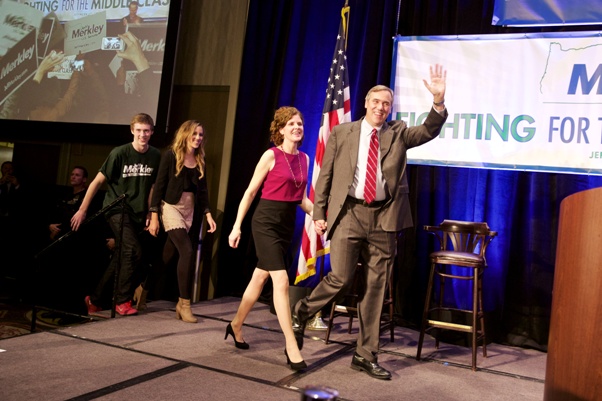 Governor John Kitzhaber was re-elected for a historic fourth term after a more contentious race than expected. But despite ethics questions surrounding his partner Cylvia Hayes, Kitzhaber took 49 percent of the vote compared to 45.3 percent for Republican candidate Dennis Richardson.

Measure 87 that allows judges to be hired by the National Guard and public universities and allows school employees to serve in the legislature, has passed. Measure 90, that would have created a top two primary election system, failed.

Measure 89, that amends the Oregon constitution with an Equal Rights Amendment for women, passed with a large margin.

Measure 92 that would require labeling of genetically modified foods has failed in a close vote of more than 49 percent in favor and less than 51 percent against.

Current lawmakers, Rep. Suzanne Bonamici, Rep. Earl Blumenauer, Rep. Peter DeFazio, Rep. Kurt Schrader and Rep. Greg Walden all won their bids for re-election. Walden will be the only Oregonian legislator in the US Congress to be part of the majority Republican party.

The City of Portland Parks bond and schools levy both passed easily.

Measure 86, which would have amended the Oregon Constitution to create a fund for Oregonians pursuing post-secondary education; authorizes debt to finance. Failed

Measure 87 which would have allowed judges to be hired by the National Guard and public universities; allows school employees to serve in the legislature. Passed