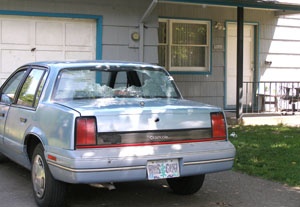 With leaves rustling in the trees, two children playing basketball on the street and a only the occasional dog bark to break the silence of this quiet neighborhood, it would be hard to guess that, just one week ago, this block of North Clarendon Avenue was the site of a shooting that sent five people to the hospital.
And it could have been a lot worse, says one neighbor.
Shattered glass still covered the back of a late model Oldsmobile three days after a barrage of gunshots broke the windows and the tranquility of this street.
According to police reports and neighbors' accounts, at around 11:15 p.m. on Friday, June 15, a car pulled up to the front of this house on North Clarendon Street, where a group of young men were hanging out in a garage-turned-bedroom.
Gunshots rang out and, in the end, five young men ages 15 to 29 were wounded.
Police have released the names of the three adults who were shot – Lexington Boswell, 20; Daniel Graham, 29; and Christian Kulju, 19. The names of the two juveniles, ages 15 and 17, according to police reports, have not been released.
Four of the victims in the attack were Black; one was White. Only one of the victims, Graham, lived at the residence. Portland Police Spokesman Sgt. Brian Schmautz said they do not believe the shooting was gang-related.
The shots, which were fired from at least two different guns, came from inside a car that had stopped in front of the home. Police have said they are unsure if there were one or two shooters. Police have not arrested any suspects and some of the family's neighbors say they have no idea why the shooting occurred.
No one is more surprised than Matilda Owen, a friend and neighbor of the family. Owen, who asked that her real name not be used, said she was on vacation with her family when she learned of the shootings.
"Things like that go around in the neighborhood a lot, but I never expected it to happen to my close friends," she said. "I was shocked. All my friends are shot, and I know for a fact I would have been there too."
But Owen said she wasn't the only one who escaped being shot. Family sources told Owen that another man was around the corner of the house when the shots rang out, and one of the six people hanging out in front of the house also was not hit.
Although residents at the home declined to comment on Monday, a man by the name of Andre said the shooting shocked him and that he was disturbed by the way they were treated by the news media. He also says he was put on hold when he initially dialed 9-1-1, which he believes caused a delay in the response time by police and emergency medical responders.
Two of the victims received life-threatening injuries, but they are now expected to live. Anyone with information about the shooting is asked to call Detective Jon Rhodes at 503-823-0459 or Detective Mark Slater at 503-823-9319.